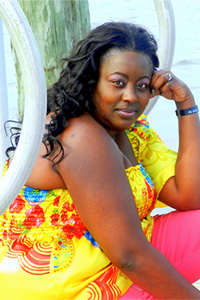 I was never the one to "go out on a limb", or the one who "took a chance", or the "throw caution to the wind" type. I was a girl with a semi-low self-esteem who smiled because she knew some day the world would become a better place for her. I had my own comfort zone with clothing, friends, work, and even with excitement. I would hang out with the same bunch of people, never really letting too many "newbies" get attached or get to know me. I went to work, came home, took care of my children, and started the cycle all over again the next day. Soon all of that would change.

Dre was my excitement, and I was his calm….we were the yin to the other's yang. We completed each other. He brought out the best in me and I brought out the better in him. When one of us was down, the other picked them up. My semi-low self-esteem was gone; comfort zones were a thing of the past to me. I had Dre, and he was all the comfort I needed. He showed me things within myself that I just couldn't see. My eyes were opened; I knew what love was and what it meant to be in love. There was nothing I wouldn't do, or wasn't willing to try and do.  My attitude changed completely, my smile was genuine and real. After a while I found I was dressing more confidently, I had a bigger circle of friends, my job was a better place to be (Dre would visit or call on our lunch breaks), and my level of excitement had surpassed any level imaginable. Dre opened my eyes and showed me what it meant to live. He showed me how to live and still be as cautious as I was without having to live inside the bubbles of my comfort zone.

Then one day it was all gone. I woke up and it felt like with one bad twist of fate everything had converted back to where I started. Dre was gone and I had no one to take comfort in any more. The one moment where I needed to be in a comfort zone with someone, he wasn't there for me. He had left me. Dre was dead and so was I. I went back to hiding and shying away from people, from doing new things, I ran from me and who I had grown to be over the years. I couldn't look at who I was and expect to carry on that way, the way Dre had help me to see made for a better me. I didn't know how I was going to do what he had helped me do every day for so many years. My world had been shattered, it was destroyed and I just couldn't figure out how to live anymore. I knew I had reasons to live, I just didn't know how to live for those reasons anymore. I became a sad shell; I smiled because I figured people still wanted to see me smile, people wanted to think I was ok (or at least that I was going to be), but I wasn't. I was far from ok. I was lost and didn't know what my next step was; I didn't know how to move forward. So I went backwards. I went back to what I knew best, my comfort zoned self. I felt neglected and abandoned and didn't know how to be found. But then it happened….something amazing.

Amazing Grace; I once was lost, but now am found, was blind, but now I see. I felt as though I was lost and one day I became found. It's the funniest thing how it happened. I grabbed a camera and I took a picture, I looked at the picture and realized I wasn't who I wanted to be or who I was to be at that point in my life. From that moment on, I decided that if I was going to live for Dre and carry on his legacy, then that meant I needed to "do better" as he would tell me. It was time I picked myself up, say a last and final goodbye to my comfort zones, and live the next days of my life smiling happily, and free. I will not allow the grief of losing my husband to blind me. I wanted to see again, I wanted to be able to do the things he and I talked about, and I wanted to be able to say  "Yes I am ok today," "Yes my smile is genuine and real,""Yes, I lost my husband and miss him, but I am living for us today and always!"