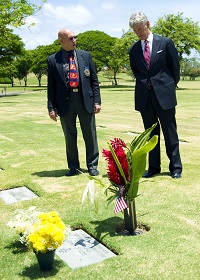 It was past midnight, the day after my brother died when my phone suddenly rang. By that time, I was already half asleep. Usually when I sleep, I have the phone set on silent. The world could end and I wouldn't care. I needed my sleep as I rarely get any. So I ignored the call. I didn't even get up to see who was calling me so late on a weeknight. Little did I know, only a few hours later when I returned the call, the world I knew actually did end and my life had changed forever.

The day was Thursday, April 19, 2012.  It is a day I will never forget. On that day, my only sibling, CWO Don Viray, was killed in action as a result of a helicopter crash in southern Afghanistan.

Because of the strong emotions felt on our loved one's day of death, so often it trumps any other day equally as important. One of those important days is their birthday. But why celebrate the birthday of a loved one who has already passed? The answer is simply because they once lived. A celebration of life is just as important as a commemoration of death. Before there was an end, there was a beginning.

The day was Tuesday, July 15, 1986. An innocent little boy who would grow up to be an accomplished young man entered the world. On this day, my brother's short life would begin.

Last year in July marked my brother's first birthday after his death. I was in Europe, far away from home and family. My friend who was traveling with me was very adamant about celebrating my brother's birthday. Despite my hesitation, we went out for dinner in honor of him. "It is an important date," she said. I didn't realize until recently that she was right. On that mid-summer night in an Italian coastal town, under a canopy of stars, we ate our dinner and sat for hours reminiscing about my brother's life. We even ordered a birthday cake, just for him. There were many moments of sadness mixed-in with moments of cheer. But at the end of the night, I smiled.

This year, on the second birthday after my brother's death, he got an unexpected and humbling birthday gift: a visit from the Secretary of the Army - The Honorable John McHugh.

Birthday celebrations after death are not so much for the deceased, but rather, they are more for the bereaved. It is a way for us to remind ourselves of our love one's life and that we should be thankful for it, even if it was cut short. It is a way to remind us to smile, even a little because that is how they would want it on their birthday. Furthermore, it is a way to remind us that a person's life transcends their death and even though it's not tangible, they still live on, every year, through the memories within us.