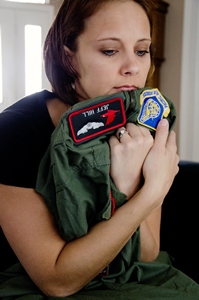 It is no surprise to say that there a gamut of emotions that go along with grief. Sadness, anger, longing, hurt, loneliness, and the list goes on and on.   I have felt the entire rainbow of feelings, and I am not afraid to admit it. I have had my times of depression, longing for the life I used to live, spent many nights wishing for the company of my husband, and of course, I have been angry. In fact, many days I am still angry…

For about 6 months before Jeff's plane crash I had feelings that something was going to happen to him. I laid in bed one night and actually planned his funeral. It was a horrible thought and I did everything I could to dismiss these feelings, but they persisted whether I wanted them to or not. I used to wear a cartouche that Jeff brought home for me after a deployment to Saudi Arabia in early 2000. It had his name on it and I never took it off because I felt that if I wasn't wearing it, something was going to happen to him. I wore that necklace for 10 ½ years, until the cartouche fell off its chain 3 weeks before his accident. It was just gone…and so was he.

Early this past summer a friend of ours (actually a co-worker of Jeff's who was one of the first from his squadron to reach out and help me whenever I needed it) was diagnosed with a brain tumor. He had the tumor removed a few weeks after the diagnosis, and while he was recovering in the hospital my boys and I went to visit him. This of course sparked a lot of conversation about brain tumors - what they do, how they affect your brain, etc. This friend was wonderful with my kids and let them ask him any question they had…which was a lot! About a month and a half after visiting him in the hospital, one of my oldest son's best friends was also diagnosed with a brain tumor…and died a few days later. Just 3 weeks before they were to start 3rd grade together.

Now in the same breath that I say I am angry with God, I can also say how amazing it is that I can feel His love surrounding us. It is amazing to me that when I step outside of my head and look at the world around me in a different light, I can see things so much clearer. These deaths were going to happen…that was part of God's plan. However, it is God's love for us that prepared us for that time. This is why do I share these stories. While I am angry with God that he took these two amazing people and that this struggle is now a part of our daily lives, I am thankful that He loves us so much that He prepared us for what was about to happen (and in even more ways than what was explained here).

When Jeff died, in a sense I wasn't really surprised. I had been prepared for it…God had prepared me for it. Before his death, Jeff and I had conversations that people don't normally have, and I know in my heart that this was because of the feelings I was having. As a result, I know he knew how much I loved and appreciated him, because nothing went unsaid…a gift I am so thankful for. It is similar with my son. Our friend's situation made us aware of brain tumors, and we had conversations about it that people don't normally have. When Tristan's friend died, we didn't have to talk about the specifics of what happened in his body because he already understood that. Instead, we talked about the hurt he felt in his heart and how his precious 9 year old friend went to join his Daddy in Heaven. This also gave Tristan the strength to stand and speak at his friend's memorial service, an amazing testimony of God's strength in us.

I have realized that being angry with God is so much easier than being angry at my husband for leaving me, being angry at the Air Force for putting him on that mission, or even being angry at the other crew members that were on that mission with him. I have also come to the realization that it's ok to be angry with God, because when it comes down to it, He can take it!  While I am angry with Him, I still have to trust in His plan. I truly believe it was that crew, on that day for a reason. I also have to believe that there was a purpose for this sweet little boy. I don't know what God's plan is, and to be honest, right now I really don't like His plan (not that I have to). However, faith in His plan is honestly what gets me through each day. It's the belief that there is something so much more than what we see, and that there is purpose to all that we do…in life and in death.