Lately, I have been struggling with the subjects of my blogs. I write better when it comes from experience and emotion. But from fear of offending in an easily offended world, I have refrained from sharing from my deepest experiences. However, I think some of you can relate to the topic of faith and grief and trying to figure out where they can both exist in our lives together.  So, hear my heart. I do not seek to offend, but simply share my own struggle with faith in hopes that someone else can also find hope. This week is Jon's 35th birthday and the 10th anniversary of the day he died. Yes, all in the same week. The cycle of life can sometimes be ironic like that.  I really thought I was going to move through the week unaffected by it…that was, until tonight.   I decided I wanted to look at a photo album a friend took of Jon's funeral.  Her pictures are so beautiful and I am grateful she took them. My memory of that day is a blur. I think my favorite one is a picture of the church steeple with the cross on top and the fluffy clouds behind it. It was a hot but pretty day… the day we buried him. When I put the album of those photos together, that's the first photo.  I found a good quote to go with it, "I try to avoid looking forward or backward and try to keep looking upward." Charlotte Bronte. That pretty much sums up my grief journey over the last 10 years. 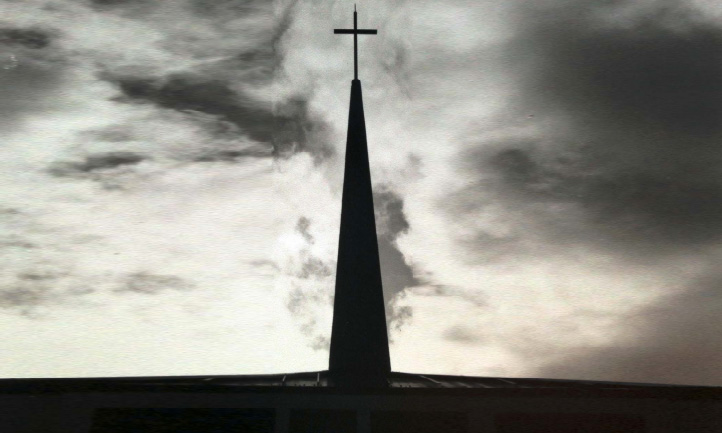 I just finished having a conversation with God about how my heart still hurts. It's not a sharp pain like it was at first or the eventual constant numbing pain that followed that, but it has waned into sporadic episodes of dull pain that come when I allow my memory of him to wander. It's a good pain, though…in that it means I still miss him. I remember the night we were notified of Jon's death. My immediate family found a moment of alone time in a crowded house where we all were staying.

A lot of times I think in songs and the words of a song I love came to mind.  I still cry when I hear that song:

You are my rock in times of trouble
You lift me up when I fall down
All through the storm
Your love is, the anchor
My hope is in You alone

I was thinking about that night earlier today and remembering that pain. There is an emotional pain so deep that it makes every breath hurt. I remember telling people that I wish I could unzip my body and step out for just a minute so I could catch my breath. If you have been there, you know the pain to which I refer.  Even in the middle of that breath-shortening pain, I remember a deep sense of just knowing God was there, with me in my pain and loss. Since I am not God I don't fully know the reasons why He allowed Jonathan to die. It's a difficult question to ask God "Why?"  I don't think I even asked that question that night, I was in too much pain. I have since then, though.

I don't think it reflects a lack of faith to ask "Why?" One of my favorite books is by C.S. Lewis on the death of his wife, A Grief Observed. It's a short book and I definitely recommend it. It is not an apology on Christianity by any means. It's simply a book of "Whys?" I know through my own seeking there are many answers to that simple question, and I don't know all of them yet. I find it comforting an educated theologian such as The Great C.S. Lewis would also ask "Why?"  I think God appreciates the honest, open dialog.

One of the most beautiful stories in the Bible is when Jesus is at Lazarus's tomb. His friend had died 4 days prior and his sisters are crying and asking, "Where were you?"  It's my favorite because it's about a brother and two sisters…sibling loss, can't bring it any closer to home than that. And it's also famous for one of the shortest scriptures in the entire bible…"Jesus wept." Why?  Well, there is a wide selection of answers to choose from, and since I wasn't there I don't really know. But I think one good reason was God hates death…and another would be His friend, Lazarus died and his sisters were hurting over that loss.

So, "Why?" is sometimes a question I still ask. Better yet I have come to understand that He weeps with me. I am not alone in my tears, even if I don't fully understand them.  He hates that I hurt, He experienced loss too, so He can relate. Also, like the words of the song above, I will trust Him…and faith is evidence of things hoped for but not yet seen.  I still trusted that God was good, even though I didn't understand my circumstances. Eventually, He gave me more reason to believe He's good and faithful, despite my circumstances. God doesn't like to unveil everything to us at once, so like Charlotte Bronte I am looking up instead of forward or backwards, trusting that He will show me more of that same goodness and faithfulness.