At one point in my life I thought a year was a long time, and in some ways I still agree with that, but at the same time, it often feels like I blink and another year has gone by. The last 13 months have been particularly rough. My fiancé SSG Su Wan Ko was killed in an automobile accident in March 2011. The months without him have felt like years, but the time I spent with him felt too short. It seems to be a cruel joke of life. 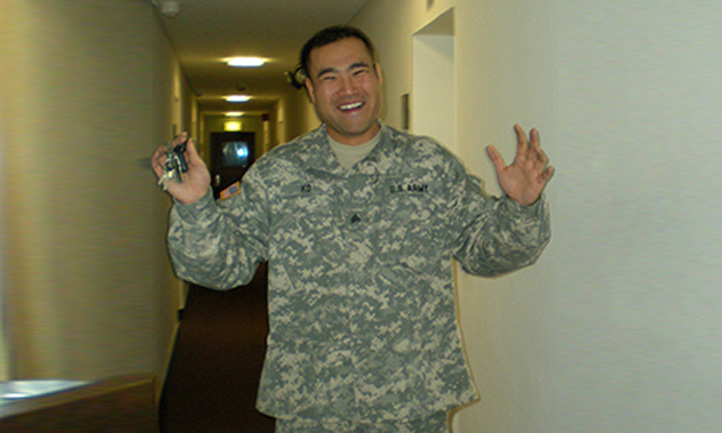 Now when people always ask how I’m doing, I’m not really sure what to say. The truth is that it depends on the moment. One minute I’m going about my day just fine and the next minute it’s like someone has punched me in the gut. I can’t breathe, and it’s impossible to stop the tears.

But before I delve into how I’ve dealing with grief, I thought I should briefly introduce Ko and myself and share our story.

My name is Dayna Wood, and I’m originally from Cincinnati, OH. Currently, I live in Lexington, KY, but I’m about to head west to Seattle! I just finished graduate school at the University of Kentucky, so I’ll be job hunting once I get out to Washington.

Ko was born in South Korea and moved to the U.S. when he was about 7 or so. He grew up in Virginia, and joined the Army in 1999.  His last assignment with Army was in Garmisch-Partenkirchen, Germany.

You’re probably wondering how we met! Here is our story:

I’ve heard a lot of people say that true love finds you when you least expect it. In my case, this was unquestionably true. In January 2010, I wasn’t looking for a serious relationship. In fact, I had pretty much given up the search. Little did I know, I was about to meet my best friend and my everything.

At the time, I was living in Garmisch-Partenkirchen, Germany and working at the Edelweiss Lodge and Resort. Ko was stationed in Garmisch and worked at the George C. Marshall European Center for Security Studies. I’d seen him before, and I think I may have even met him, but for whatever reason, I never really paid much attention or gave him any thought. That sounds terrible, but like I said, I had kind of given up on the whole relationship thing.

This all changed one Tuesday night in late January 2010. I was out at a local bar/restaurant in Garmisch with some friends, and the place was packed! I was patiently waiting at the bar to get a glass of wine, but it didn’t look promising. Despite my best efforts, I couldn’t get the bartender’s attention. All of the sudden, Ko turned to me and asked what I was trying to order. Voilà! Within a minute Ko had my drink and was handing it to me with that devastatingly handsome smile on his face. I tried and tried to pay him for the wine, but he refused.

After that, we talked all night and just enjoyed each other’s company. It wasn’t until about two weeks later that we actually went on our first date, but I realized very early on that being around Ko was effortless. I didn’t have to pretend or put up walls.  In fact, that was probably one of the biggest things that we both valued about our relationship. We could just be ourselves…..the good and the bad.

By July 2010, I had finished my contract with the Edelweiss and was due to return back to the States, and on Ko’s birthday, July 23, I headed back to Ohio. Being separated from your best friend is miserable, and I know so many of you know exactly what I’m talking about. Your heart just aches to have them near you.

To be fair, I could have tried to stay in Germany, but I had already been accepted into my top choice for graduate school, and Ko didn’t want to see me turn it down. He had an amazing way of being my biggest cheerleader and always convincing me that we could make things work…..no matter the distance.

Naturally, Ko was right. Our relationship was tested at moments, but being on separate continents couldn’t shake the love and commitment we shared. We just did what we could to make the best of the situation. We found ways to visit each other when we could, and Skype became a staple in our lives.  We were counting down the days until the spring of 2011 when Ko would move to North Carolina and be stationed at Ft. Bragg. We would finally be in the same time zone, and I could move down there for the summer.

Unfortunately, life had other plans, and there was no way I could have prepared myself for what was about to happen next.

Ko had informed me that he had signed up to tryout for Special Forces. At first I was downright annoyed because the tryouts happened to be during my spring break, and I was hoping we would get to spend that week together. Nevertheless, I knew he was excited about such an opportunity, and I realized that it was important for me to be supportive of him in the same way that he always supported me.

The tryouts began in early March 2011 at Ft. Bragg. Ko called me a day or so before, and this was the last time we would ever speak. It was a pretty quick conversation, and I remember asking him if I’d get to talk to him while the tryouts were going on. He said he wasn’t sure, so I responded “In that case, I love you, and I’ll be thinking about you everyday.” These were my last words to him. I can’t think of anything truer and more genuine that I could have said, but the sting of this memory reduces me to tears every time.

On March 7, 2011 my world shattered into a million tiny pieces, but I wouldn’t find out for another day and a half.

It was 6:15 AM on March 9, and my alarm had just gone off. Naturally, I laid in bed hitting the snooze button trying to avoid the inevitable. As I was trying to convince myself to get up, there was a knock on my bedroom door, and my roommate was standing there on the phone. She had a panicked look on her face, and I remember her exact words “I don’t know what’s going on, but you have a phone call.” I remember wondering who would be calling me on her phone and this early hour, but at that moment I wasn’t scared or worried.

On the other end of the line was Ko’s best friend. For whatever reason he didn’t have my phone number, but he was able to get a hold of my roommate. I remember him telling me that Ko had been in an accident. I then begged to know that Ko was okay, and while the phone call is still largely hazy in my mind, I distinctly remember him telling me “Ko is gone”.

At that moment, my world collapsed. I couldn’t breathe, think or stop my head from spinning. How had this happened? How was Ko in a car accident when he should have been at tryouts?

It turns out that, for one reason or another Ko didn’t make it past the first round, and was released. After this, he had some free time before going back to Germany and rented a car to come surprise me.  He had just past the North Carolina state border and crossed into Virginia when the accident occurred. A boulder almost the size of a small car had come down the side of the hill and landed in the middle of the left lane. In the darkness, he just couldn’t see it and hit it head on.

Not long after I was informed about the accident, I decided to Google it. This was probably one of the worst ideas I’ve ever had. I never stopped to consider that there would be pictures of the car. Those images are still burned in my brain and haunt me in a way I can’t even begin to describe.

The days and weeks following the accident were a blur. I barely touched any food, and I couldn’t convince myself to get out of bed. I am very blessed to have friends and family that never left my side and took care of me….even when I didn’t know or couldn’t adequately convey my needs.

The funeral was held at Arlington National Cemetery on March 30, 2011. Just over a year later, I can say that it still feels like a bad dream. There are so many days that I still expect to see his name popup on my caller ID when my phone rings, and I still believe he’s going pull up in his big green Ford truck.

Anyway, I don’t want to share all of my journey in this first post…..it would go on for days! I also don’t want to end this post on a sad note, so I think I’ll share a couple reasons about what makes Ko so special to me.

Ko is truly one of the most loving, gentle, and kind people you’d ever hope to meet. I’ve always said that I don’t know what a mad Ko looks like. I’ve seen him annoyed and frustrated, but never genuinely mad. He has this amazing ability to take everything in stride and be patient. I, on the other hand, am the exact opposite. We balance each other out, and I will always believe that he is my better half.

Ko is also one of the funniest people I’ve ever met…..often without trying. My friend Allie and I love to joke that he never actually laughs. He only knows how to giggle. He’s quite big and muscular and can seem intimidating at first. Yet, the truth of the matter is that he is a giant teddy bear with a huge heart.

As a quick side note, are any of you like me in that you always say your loved one IS and not WAS? I just can’t bring myself to say Ko was funny, Ko was happy etc. To me he isn’t gone. He may not be physically present, but he is always right next to me.

I could go on and on about the things I love about Ko, but there are more blog posts to come!

Thank you for reading, and I don’t know where I’d be without my TAPS family!