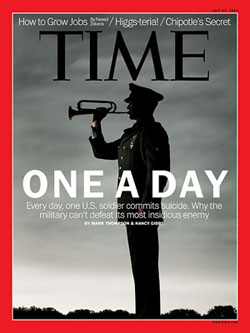 TIME magazine’s cover story issued today asks why active-duty service members are dying by suicide and features the stories of two widows who both lost their husbands on the same day, March 21, 2012. Both widows are getting peer-based emotional support through TAPS.

Leslie McCaddon is the surviving widow of Army Captain Michael McCaddon. McCaddon was a bomb disposal expert and a medical doctor who died by suicide while attached to Tripler Army Medical Center in Hawaii.

Rebecca Morrison, of Copperas Cove, Texas, is the surviving widow of Army Captain Ian Morrison. The Apache helicopter pilot had recently returned from a deployment to Iraq, was attached to Fort Hood and was a 2007 West Point graduate.

Also quoted in the cover story is Kim Ruocco, director of suicide postvention programs at TAPS who lost her husband, Marine Major John Ruocco, to suicide in 2005. “I was with them within hours of the deaths,” Ruocco says of the two new widows. “I experienced it through their eyes.” Their stories, she says, are true.

A companion piece to TIME’s cover story focuses on how military families can get help. “What we learn from our families [who lost service family members to suicide] and what they saw in their loved ones, is behavior [in which they] pulled back and felt they were not able to be a useful part of unit that relied on them,” says Bonnie Carroll, founder and chairman of TAPS in the story. “These men and women need to know they are still a part of a unit at home and overseas.”

TAPS intakes on average eight to ten people per week grieving a death by suicide of a service member or veteran. Approximately 3,000 people impacted by suicide losses among service members and veterans are involved with TAPS.

The cover story is available on www.TIME.com for subscribers or at newsstands. Several companion pieces are available for free online, including a story for military families seeking help.

If you are grieving the death of someone who served in the military, TAPS is here to offer care and support. Please call 800.959.TAPS (8277).