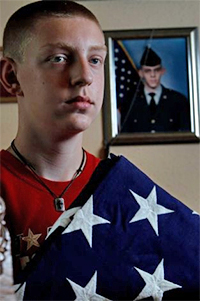 Timothy Swenson, age 13, of Humble, Texas, shares his story of coping with the death of his dad, to help other grieving military children. Swenson was six years old when his father, Army Specialist David Paul Swenson, Jr. died by suicide. Timothy has found help at TAPS.

Timothy shared his story with reporter Lindsay Wise, from the Houston Chronicle. His advice to other children grieving a military loss is: "Let your feelings out. And just, like, don't hide it." He also says for adults "Suicide is not the answer."

Initially, Timothy didn't believe that his dad had died by suicide. In 2009, his grandparents took him to the first annual TAPS National Military Suicide Survivor Seminar in San Diego, California. He met other children who had also lost a parent serving in the military to suicide.

It was a turning point for Timothy in his grief. His grieving began anew, said his grandparents. He was angry and sad. But the other children in TAPS comforted him. "They were just helping me, telling me the world wasn't over," said Timothy.

He attends TAPS programs every year. "He goes to get his own good out of it and tell his own story, but a good portion of his benefit is reaching out to help others, even though he's still a kid," said his grandmother Judi Swenson.

Read the story about Timothy and his grief journey in the Houston Chronicle.