When a family you know loses a spouse and a father, you want to do anything you can to make life easier for them.  Sometimes, it can be difficult to find ways to help.  Are you going to say or do something wrong?  Are you going to be more of a burden than a help?  Do they really want your help at the time?  Other times, being able to help just comes naturally.  I didn't give it a second thought when Rachael asked family and friends who were running in Anchorage's Big Wild Life runs to consider running for the TAPS team.  My answer was an absolute "YES!".  After joining the TAPS team, the challenging but fun part began!  Along with training for a half marathon also came the fundraising.  Initially, I sent out an email, giving my donors 4 months to contemplate a donation.  I was so surprised at the donations received literally within a day of sending out the email!  Signing on to Facebook at least once a week, I posted the TAPS Run and Remember website and encouraged people to show their support to the TAPS organization.  Again, I was so amazed at the support I received from family and friends.  The monetary support along with the words of confidence really made the fundraising part of running a half marathon for a cause a simple task.  Running a half marathon requires physical training, but I believe it requires a  mental dedication as well.  With that being said, I can honestly say that my trainings everyday were not all that difficult.  How could they be?  Mentally, day after day, I had all my supporters in mind.  Everyday, I kept in mind how lucky I was to have such loving, kind and caring people in my life.  People who not only supported me in running 13 miles but who showed respect for the survivors of our fallen military heros by making a donation to TAPS in the name of Captain Jeff Hill and Hillbilly's Heros.  Names and faces unknown, the chain of love is so powerful! 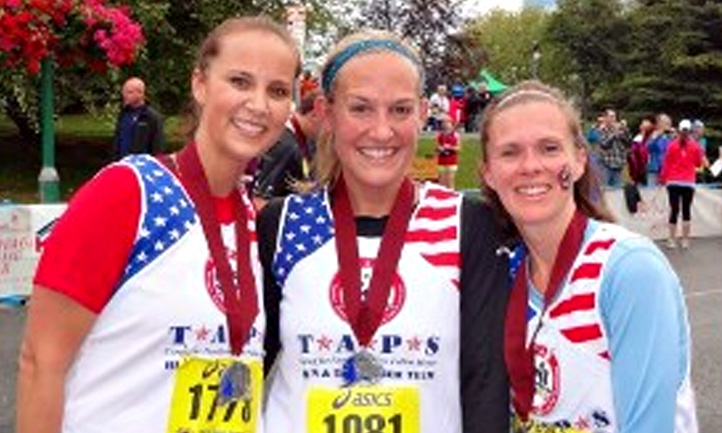 Participating in a fun run brings camaraderie to a city when everyone is challenging themselves and encouraging others to do their best.  Running for a cause, like TAPS, feels like you are running for a smaller, very special family, within an extended community family, all of whom are there to cheer you on.  It was such an honor to wear the TAPS singlet during yesterday's Big Wildlife Run.  Not only did I feel we ran for our fallen military heros and their families, we put the TAPS name out there so hopefully others will be encouraged to run for TAPS in the future.  The support of our family, friends, donors, the Anchorage Family and the TAPS family made running 13 miles a piece of cake!

I am so proud of my friend Rachael.  I know Jeff is proud of her too!  She continues to show her unending love for Jeff by keeping his legacy alive in all of us.  Thank you Rachael for welcoming many of us to your TAPS family.