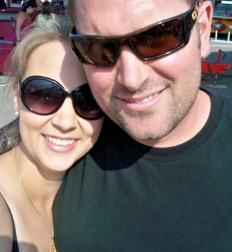 I am finding that grief can rear its head in ways that I never expected. “Attacks” of missing my husband come without a moments notice and one day I can be feeling great, pressing on with life while the next day arrives with a completely new set of emotions. It can sometimes be a serious emotional roller coaster! For me there is new meaning to the phrase “one day at a time”.

I recently had a span of a few days where I just wasn’t myself and was missing Jeff so badly I could physically feel it. I continued on with my happy façade and just pushed those feelings down deeper until I was able to let them out privately. This usually works pretty well for me except that on one of these days I found myself in a situation where that was very difficult to do.

I was in a social setting with a number of young, military wives and there came a point where we went around the circle sharing our own personal prayer requests. The prayer requests were simple, regarding what was going on in these women’s lives. I asked to be skipped and quietly wrote down their requests on my notepad. Now this is not normally an overwhelming experience for me but at the time I was at a low point in my grief, already on the verge of tears, and when I left the meeting my mind was spiraling out of control with so many thoughts and feelings.

I first thought about how menial their requests seemed compared to what I have been dealing with these past two years. Then I thought to myself how thankful I am that this is all they have to deal with. I hope and I pray that they never have to experience this kind of loss and pain! Until Jeff’s death, I was one of those women who thought the world was going to end because my dishwasher wasn’t working, and oh how I wish I could go back to those days. I found myself asking, “Why did it have to be me? Why did it have to be my husband? It just isn’t fair!” No, it’s not fair. Life isn’t fair.

So I find myself in a personal dilemma. I don’t ever want people to walk on eggshells around me, afraid of saying something that might offend me or make me upset. However, maybe a little situational awareness would be helpful. There are always going to be difficult times and conversations that I just don’t fit into anymore, and while I often don’t mind sitting quietly waiting for the topic to change, it is still a stinging reminder of my previous life…a life I never wanted to give up. This is especially difficult on those grief-filled days!

I also don’t want to be known as “the widow”, but yet I do want people know about my situation to hopefully prevent those awkward moments that inevitably come up. The question, “So where is your husband?” is a difficult question to answer since “Arlington National Cemetery, Section 60, Site 9600” just isn’t a well received response. It is often a conversation killer that just makes the other person uncomfortable, not knowing what to say next. I personally find it easier to just put it out there in the very beginning to alleviate that elephant in my mind. I did not know many of the women in the group I mentioned before so what do you then? Introduce yourself like you’re in AA saying, “Hi, I’m Rachael…and I’m a widow.”  I don’t know…I’m still trying to figure that one out.

One thing I have learned in this journey is that your struggles in life are your struggles and that no one person’s difficulties are worse than anyone else’s. They are all individual. If potty training your 3 year old is the most difficult thing you have had to deal with, then that is a valid struggle and who am I to contradict that? You can’t compare your struggles to mine and I can’t compare mine to yours. We have to work with what we are given in our own lives and go from there.

During normal day to day life I try not to dwell on my situation, but instead look for the positive and simply enjoy each day I am given. However, at the end of the day this is my reality and I know that sometimes I just have to face it head on, no matter how much it hurts. It’s part of the process and as much as I don’t want accept it, it’s the only way I am going work through it. I miss Jeff terribly and I will always miss him, but I know that accepting it and dealing with it is the only way to get through it.

“The world is full of suffering, it is also full of overcoming it.” --Helen Keller