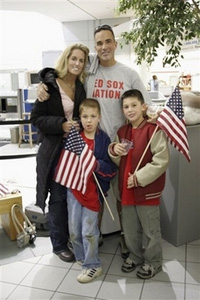 Widow Shares Marine’s Story to Save Others From Suicide, Helps Families Left Behind

Kim Ruocco regularly relives her darkest days – her husband’s suicide and the downward spiral that led to it – to save other military families from the same heartbreak.

Ruocco was a decorated Cobra gunship pilot with three deployments under his belt: to Bosnia, Somalia and Iraq, where he ran 75 combat missions. At the time of his death, he was preparing for a second deployment to Iraq.
By all accounts, Ruocco was the perfect Marine, Kim told the Natick audience, smart and athletic and full of life. “Everyone loved and looked up to him,” she said, seeking him out for advice and counseling in both their professional and personal lives.

What they didn’t realize, his widow said, was that Ruocco suffered from bouts of depression and post-traumatic stress. He blamed himself for the death of an elderly driver from a head-on collision during his high school years, and was haunted by a 1990s training accident in which he lost four friends when two Cobras crashed in mid-air.
But Ruocco lived by what he considered to be “an unwritten code,” his wife said. He hid his troubles from everyone, particularly his chain of command, and insisted that she do the same.

“He was so afraid that everything he had worked so hard for would be taken away from him,” she explained.

A trained social worker, Kim detected the subtle changes: the “life-of-the party” who now withdrew from friends and family, the stellar achiever who inexplicably failed a performance test at work, the athlete who began losing weight and took on a pasty pallor. But particularly troubling, she said, was a distant, hollow look in his eyes – one she had never seen before and couldn’t bring herself to understand.

“Even though I had master’s level training in counseling, I still, in the midst of it, could not really see how sick he was,” she said during an interview with American Forces Press Service. “And I also didn’t know where to go with it or what to do with it.”

During her last phone conversation with him when she was home in Massachusetts and he was living temporarily in a hotel near Camp Pendleton, Calif., preparing for deployment – Ruocco told Kim he was considering seeking mental health counseling.
She hung up the phone with a deep sense of dread, fearing her husband had reached the crisis point. Although he was due home within days, she raced to the airport, purchased a cross-country red-eye ticket and flew to California as quickly as she could.

She arrived too late. Ruocco had died by suicide.

Now seven years later, Kim says she’d give anything to turn back the clock and change everything. She would have forced her husband to go for counseling, she said, and made clear to everyone in his chain of command that he was in trouble.

As national director of the Tragedy Assistance Program for Survivors suicide postvention and education program, Ruocco crisscrosses the country, sharing her story so others can recognize the risk and warning signs of a loved one, friend or co-worker. Last year alone, she made 50 presentations.

Ruocco is particularly busy this month, National Suicide Prevention and Awareness Month, and welcomes the opportunity it provides to focus on the problem.

“People are so busy with their personal and professional lives – especially in the military – that there is really not a moment for them to stop and think about it,” she said. “And I think it is really important to put everything else aside and think about it for a moment.”
That’s what happened here yesterday, as about 150 military members and 1,600 civilian employees participated in a mandatory suicide prevention stand-down. The agenda included Ruocco’s presentation and one on substance abuse, as well as resilience and suicide awareness training.

Army Lt. Col. Frank Sobchak, the garrison commander, called suicide “a silent predator stalking our military.” Last year it claimed 283 in the Army alone, counting active-duty, Reserve and National Guard soldiers and civilian employees. This year, the toll is about one per day, Sobchak said, with 39 deaths by suicide in August alone.

“If you say it doesn’t happen in your organization, you are wrong,” he said “It does. Don’t think it is not going to come to your unit or organization. So look out for each other and take action.”

The best suicide prevention, Ruocco told the group, is vigilance in recognizing when someone is in trouble and a leadership climate that encourages them to get help.

“Suicide prevention is paying attention to all the little things as they add up,” she said. “It’s looking at our soldiers and our Marines and saying, ‘What are we asking of them? What are the pressures they are under? What are the stressors they have? What are the risk factors they have and how can we help them before their lives fall apart?’

“We are all at risk,” she said, particularly military members who, like her husband, have suffered trauma and loss.

Many people fear that seeking help would make them look weak, and choose to “tough it out” on their own. It’s behavior “so typical of our service members,” Ruocco said. “They sacrifice so much that they don’t think of themselves,” she added.

Ruocco said she considers it her personal calling to change that by helping military members recognize that seeking help when they need it is a sign of strength, not weakness.

She also strives to promote a climate within the military that encourages mental health care without stigma. Citing several promising developments since her husband’s death, she said she hopes to see more.

Meanwhile, Ruocco remains committed to helping military families who have lost a loved one to suicide. She remembers her own loss as if it happened yesterday, and her voice still cracks when she discusses it publicly. “Your world has burned to the ground,” she said.

As grieving families struggle with their loss, they, too, are at heightened risk, she said. Sixty-five percent of the TAPS suicide survivors tested high on scales for post-traumatic stress, even two years after the death. And studies show that families of suicide victims are five times more likely than others to die by suicide themselves.

What they need, Ruocco said, is a “listening, compassionate ear” and a way to channel their grief into something positive. “The death seems so meaningless,” she said. “They want to do something with it, to find meaning and purpose for that loss.”

And their biggest fear, she said, is that “how their loved one died would define him and wipe out all the good he did.”

Ruocco makes a point during her presentations to share her husband’s attributes – the qualities that made her fall in love with him – and his professional accomplishments so people can understand that nobody is immune to suicide.

“What started me doing this was the fear that everyone would remember my husband for how he died instead of how he lived,” she said. “And I felt like it was so important to get out there and talk about what [led] him to that. It wasn’t an act where he just said, ‘I am dropping my pack, I am not going to take care of others and do my duty.’

“It was a real sickness and a real challenge and a real struggle and a real journey for him,” she said. “And that’s what I want people to understand, so they can learn from his story to help each other.”

This blog post was adapted from an American Forces Press Service story by Donna Miles.