November 15 is National Children's Grief Awareness Day. At the Tragedy Assistance Program for Survivors (TAPS), we provide comfort and care to anyone grieving the death of a loved one every day, but we take today to recognize the special challenges that military children face after losing a parent, and the strengths they carry that can help them cope with loss too. 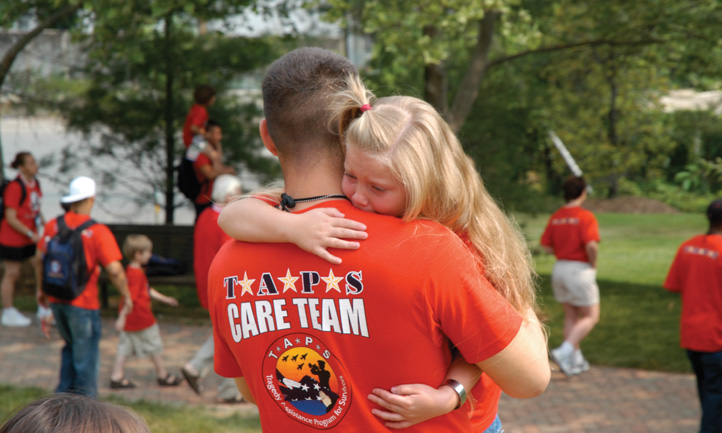 When someone raises his or her right hand and swears an oath joining our military and promising to protect our country unto death, his or her entire family also joins the military. Children carry the identity of being part of a military family. The military is a way of life and most military kids are proud of the important heritage they are born into. Serving is full of wonderful history, pride and patriotism that can only be truly understood by those who live it.

A child in a military family may have been raised on base and in a Department of Defense school system where they were known as the "First Sergeant's son" or the "Captain's daughter." Here in this tight-knit military community, the child was surrounded by a large support system of peers.

The comforting sound of Humvees and helicopters in the background may be all these children have ever known. Moving every three years may be a way of life for a military family, and while it can be difficult, it is often a positive experience allowing for personal growth for children and spouses.

When the seemingly invincible and larger than life service member dies, this culture that was so deeply linked to the child's life and identity is now fractured. Many feel it too is lost as the family is forced to move off base and often far away from a military installation.

A child grieving a military death has a very different struggle than their civilian peer as they struggle with this uncertainty at a critical time in their development. Here are some important considerations when supporting children who have suffered the death of a loved one in military service.

Military deaths are unique and carry public meaning. They are often public deaths -- a service member's death may be talked about in the news media, with images of the service member or from the funeral replaying often on community media outlets. When someone dies during deployment or is killed in action, a news release may be issued by the military.

While the entire community may desire to grieve with the family for the service member, some families find the public nature of their loved one's death to be hard to manage personally. The desire of strangers to offer comfort by reaching out to hug and touch surviving children may feel invasive to them, especially when it continues to happen at the grocery store or in a public place, after the funeral has ended.

The child is grieving a personal loss. The child is grieving a beloved parent, sibling or other relative that he or she knew personally. We have to remember that these are personal relationships. Because military deaths are often treated as public deaths, society uses different language than it would normally use about the person who died. While society uses terms like "paid the ultimate sacrifice" or "rendered the last measure of devotion," the child remembers the person in familiar terms and is grieving the death of a personal hero. This can be very confusing for a child.

Death is a permanent separation, but it may not feel permanent to a military child. When a service member dies while deployed or soon after they return, the family and the child may feel as though the service member is still deployed, which is easy to do. Many service members have been deployed for over a year and served for multiple tours away from home, so the family was accustomed to his or her absence. This can make it harder to accept the death, as the family may continue to feel as if they are in deployment mode.

Death notification and burial are very different in the military from civilian life, especially when there is a death while serving or when a loved one is killed in action overseas. The next of kin is notified in a very somber and prescribed way by two uniformed service members who knock at the door and deliver the news that no family wants to hear. Children may witness the officers arriving with the news and see the surviving spouse's reaction to it. Burial follows with many long-standing military rituals and protocols.

Children may become a public image of grief in their community. Images of children of fallen service members at the funeral are sometimes displayed by the news media, who are seeking to show the poignancy and the impact of loss on real families. Images showing children receiving a burial flag at a funeral or standing next to caskets can be repeated in the media and online in tribute videos about our fallen military and their families. These images can further traumatize as they hold the child frozen in time -- forever shown as the sobbing or sad but proud, child of a fallen hero.

Children may carry a label as a grieving military child. Even if children are sheltered from press coverage, they will still go to school and be the child of a fallen military hero, or the child coming to school without a dad. I once heard a young teen attending the TAPS Good Grief Camp program talk about how it felt to go back to school and be "the girl whose dad got killed." The public identity of a child as a bereaved person can eclipse other parts of their lives and leave them feeling isolated and alone.

Military children often experience many secondary losses following the death of a parent. Moving away from the military community is something that many families do after the death of their service member. Now the motto, "Home is where the Army sends you" no longer applies, and the surviving spouse may have to choose where the family will go soon after the death. They may return to a "hometown" they have not seen in years, and the child loses the last home he or she shared with the person who died, and must start over again at a new school and in unfamiliar surroundings.

Children may find comments made by others outside the military community to be disturbing and upsetting. I have heard children talk about how people - sometimes complete strangers -- have shared their personal views of war and government and linked their opinions to the death of the child's loved one. School lessons covering history or discussions about war with outspoken classmates holding different values or opinions may be challenging for a grieving military child. These opinions can cause conflict for the child when they don't reflect the views of the child or their family. To a child, their loved one was a hero - period.

As much as we would all like to take away the pain that a bereaved child carries after suffering the death of a loved one -- we can't relieve or remove their pain. Bereavement experts tell us that children need to take breaks from grieving. Giving a child the opportunity to play and "be a normal kid" is very important. Children and teens tend to grieve in spurts, with grief welling back up from under the surface -- as they reach new milestones in life or get jarred by familiar reminders that bring grief bubbling back out.

Rather than avoiding talking about it, children and teens tell us that they would like to set their own pace when it comes to sharing or talking about their loved one who died. The problem is that many people around them often walk on egg shells, afraid to "bring it up" for fear of making the child or teen sad -- while others see the child as "only" a bereaved child of a fallen hero and not as a full person.

Effective bereavement programs provide the children of our fallen military with a safe space to share what they are feeling, where they are not judged for being angry about the death of the loved one or worried about hurting others in their family by being honest. In a safe and supported environment, they are truly able to express themselves in their grief.

When talking to or working with a bereaved military child, caregivers, teachers and others should take the time to understand the military culture that these children come from and understand the long-term impacts of grief and loss.

At TAPS, we give grieving children a safe and supportive environment through our TAPS Good Grief Camp program, where they can build supportive peer connections and find the support of other caring adults, who are trained to support their journey.

Hundreds of active duty service members volunteer their time each year with TAPS, to be Good Grief Camp mentors to grieving military children -- providing a critical link back to the military community that the child lost. While spending time with the child, these mentors will also share how America honors those who serve and die for their country, and help children understand that their families are connected to a legacy -- one that America has always had -- of service and sacrifice for country.

When an eight-year-old walks into a TAPS Good Grief Camp session and sees twenty other eight-year-olds who have also lost a dad or sibling who served in the military -- there is an understanding and bond found that can't be found anywhere else. Sometimes the best help is the listening ear of another child who has experienced a similar loss. Many children have never met another child who has lost a loved one, and the added benefit of the military connection provides an extra support of understanding. We often see children forge bonds that last for years, where they are able to support each other as they cope with grief and grow up.

During the Good Grief Camp, we focus on normalizing feelings, coping skills, and support systems. While realizing that they are not alone, children have a trained military mentor there to provide support who understands the military. Along with grief activities, we incorporate the military culture as much as possible throughout the Good Grief Camp through static displays of military vehicles and equipment with military personnel.

While children will always carry the death of a loved one with them as a life experience -- positive support can help them find strength for the journey and make their path smoother. By giving bereaved military children a safe environment that is nurtured by caring adults who understand the military culture, and the coping skills and peer network they need -- we give them the support they need to move forward in life.