Why do I donate to the Tragedy Assistance Program for Survivors (TAPS) each year via the Combined Federal Campaign?  It’s because of Memorial Day Weekend 2007. This weekend forever changed my perspective on life. 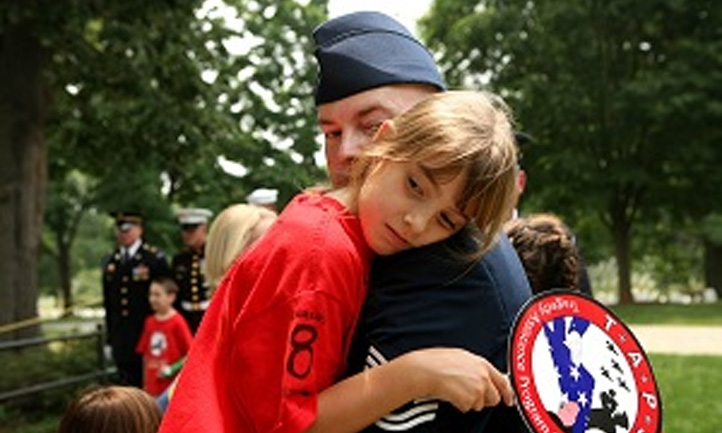 It was the beginning of a journey which would lead me to becoming a “TAPS-aholic.”  With no knowledge of what to expect that first weekend of volunteering, I just hoped to make a positive impact on a young child’s life at the TAPS Good Grief Camp.

Little did I know that these children would have an even greater impact on my life.  I quickly learned how strong, smart and resilient these young children were.

It began as a small quiet circle of introductions…name, age, where are you from?  Finally, “why are you here?” Many of the children were not interested in answering this question and wanted to move on.  Until, one child said their father had been killed in Iraq.  This one response led to stories of war casualties, aircraft accidents, death caused by a drunk driver, cancer, suicide…the list went on and on.

The one thing they learned was that they are not alone. They had made new friends who understood their situation and shared their grief.

Since and because of that day, I have been a part of numerous national and regional TAPS Good Grief Camps, as well as many other TAPS events.

They have taught me to cherish what I have in my life and to always be thankful for the great people that are in it.  I have strived to give everything that I can back to these young children while each time I learn even more from them.

I have seen the donations collected hard at work and I could not think of a greater organization or cause to donate my time and money to.

James Baird volunteers for the TAPS Good Grief Camp program to help support children and teens grieving the death of a loved one who died while serving in the military. We thank him for sharing his perspective on why he gives back to TAPS in so many ways. You can donate to TAPS through the Combined Federal Campaign (CFC #11309) or donate your time.

Pictured: James Baird at the TAPS Good Grief Camp with a child over Memorial Day Weekend in 2007. In 2012, more than 500 children grieving the death of a loved one who served in the military attended the camp. Watch a video about their experiences.