On May 19th I ran my first full marathon in Fargo, ND with the TAPS Run and Remember team. I have had people ask me, “Why would you want to run 26.2 miles? That’s crazy!” Yes, it is definitely crazy but in my mind if you can run a marathon, you can do anything! 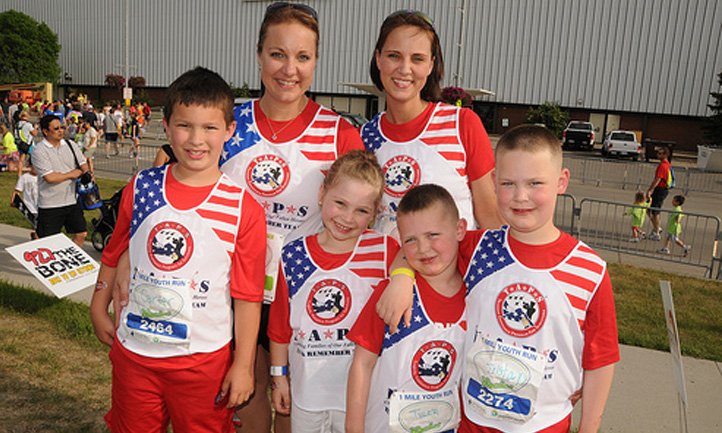 My running adventures began in the summer of 2009. We had been in Alaska for not quite a year and I randomly decided I wanted to run a half marathon. Jeff was always very supportive of whatever crazy idea I got in my head, so he said to go for it! I did a 10-week training program and with his support on race day I completed my first half marathon!

The next year I decided I wanted to do it again. I worked hard training and when race day came I wasn’t sure who was more excited – me or Jeff! He had our two boys packed in the minivan and was set for a day of adventures. I gave him the race brochure and he was completely stoked to find a course map inside. I sat there watching him as he mapped out his plan of where they were going to stop and debated about how many times they could catch me along the route. Now that he knew what to expect and knew what the course was, he ready to go and started calling himself my “Superfan”!

The gunshot sounded on race day and off we went. Just before mile 1 we rounded our first corner and just as expected, there was Jeff and my two boys beaming with pride as they searched the crowd for my bright pink shirt. I gave them a wave and a smile as I turned onto the next road. The boys were jumping up and down in excitement and when I looked in Jeff’s eyes I could see it. He was on a mission and it was “go time” as he would say…off to stop number two.

I continued along starting to find my pace when here came the first dreaded hill. It was a gradual hill but it was long. Well, long to me anyway. Cars weren’t allowed on that road so it was pretty quiet. I was jamming along to my music struggling up the hill when I looked over and saw a minivan…MY minivan!

The boys were hanging out the window and sunroof so excited to see me! I looked at Jeff with this “oh my goodness this is horrible” look while he looked back at me with the biggest grin on his face and said, “I can’t believe we caught you! That’s so awesome!” Awesome wasn’t quite the word that I was thinking of, but just seeing his smile made me forget about that awful hill! To this day I am still not sure how he got back on that road. The roads were all blocked and when I asked him how he did it he just replied with, “nothing can stop your superfan!”  Typical Jeff!

The year after Jeff’s death I decided I wanted to run that race again, just to prove to myself that I could do it. I hadn’t trained enough for the half marathon so I did the five-miler, which starts and finishes on the same course as the half marathon. I ran it with a friend and as we ran down to that first corner where Jeff always stood with the boys I was having a hard time fighting back the tears. That was his place and I could still see him standing there chatting with the cop while searching for my pink shirt.

The Fargo Marathon was the first real race event without my “superfan” there pushing me along. The first real event without wondering which corner he’s going to be cheering me on at. I had a number of family and friends at the race supporting me and Jeff’s picture pinned to my TAPS jersey but it’s just not the same. However, just picturing that excitement in his face and knowing how proud he would be of me is what kept me pushing forward. I finished 26.2 miles and will proudly wore our team name “Hillbilly’s Heroes” on my shirt, his picture on my back, and his memory in my heart!