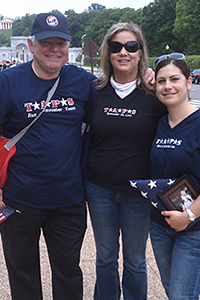 Reminding Americans About the Real Meaning of Memorial Day

As a survivor, it was an honor to participate in the Carry the Load national relay as it went through Washington, D.C. as we made our journey from the Lincoln Memorial into Arlington National Cemetery honoring America's fallen heroes.

I was in the company of other military surviving families, battle buddies, and a few wonderful supporters of TAPS. Participants carried items of special meaning to them, a folded flag, a photo, names of fallen heroes, and little American flags.

I think the most wonderful part of it was the camaraderie we we walked and shared together.  As we walked through part of Arlington National Cemetery we walked past Section 59, which felt very profound to me. Two of the airmen killed in the Khobar Towers terrorist bombing with my late husband, Dee, are laid to rest in that section, and I also reflected on the times I had been to that section for memorial services honoring my late husband and his 18 Air Force comrades killed with him.

As we continued on, we made our way to Section 60, where many of those who died in Afghanistan and Iraq are laid to rest.  I watched surviving families visit their beloved fallen heroes, I watched battle buddies visit and pay respect to their fallen friends, and I saw many headstones of names I have come to know through their families at TAPS.  If I could only use one word of what I felt when we "carried the load," it would be "love."

It was so special for TAPS to be invited to participate in this event.  Prior to our memorial walk, the Carry the Load organizer, Coleman Ruiz, gathered us on the steps of the Lincoln Memorial and thanked TAPS for not only being there and participating, but for what TAPS does and for our support to military surviving families.  TAPS will receive a portion of funds raised from the national Carry the Load relay.

The Carry the Load national relay is a 1700 mile event that began at West Point on May 1st and runs 24/7 until the final leg in Dallas, TX on Memorial Day.  Each leg of the race has a story or a special meaning to those who are participating.

I think that Americans who learn about Carry the Load and its mission to take back Memorial Day will appreciate the sacrifices of our military and their families even more, and remember that Memorial Day isn't just about the day the pool opens, or a big day for the first summer barbeque.

There is a reason and a purpose for Memorial Day – to remember and honor our fallen military heroes and the sacrifices they have made for all of us. Thank you Carry the Load, for helping Americans remember the true meaning of Memorial Day.

Marie Campbell is the surviving spouse of Air Force Sergeant Dee Campbell, who died in 1996 when terrorists bombed the Khobar Towers in Saudi Arabia. Campbell is also the director of the TAPS Run & Remember Team, which honors our fallen and raises funds to help their families throughout the United States.