Transitioning to Team TAPS for the New Year

It was the fall of 2000 when TAPS entered its first team in the Marine Corps Marathon. The team consisted of Lori Hunter and Marie Campbell, both surviving widows. Through the years, the team has grown by leaps and bounds, encompassing runners of every relationship, age, and experience. The team also has grown to cover many more events than the annual Marine Corps Marathon in Washington, D.C. This past year, TAPS fielded more than 1,100 runners in dozens of races. 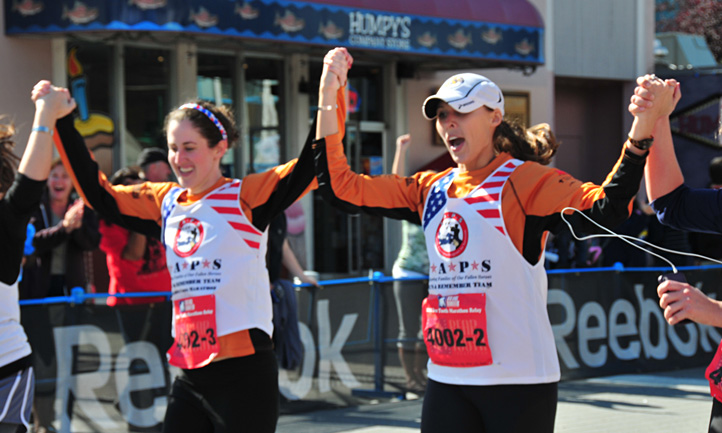 For many survivors, friends, military members, and donors, the TAPS Run and Remember Team has been a mainstay of meaningful involvement. Runners and walkers have engaged in races all across the United States (as well as in foreign countries) to raise funds and awareness for TAPS, honoring the loved ones who died while serving in the American Armed Forces.

Now as we enter our 15th year of teamhood, we are transitioning in a way that will allow more entries in more events. By changing our name from the Run and Remember Team to Team TAPS we are opening up opportunities to participate in unlimited types of events in addition to our running events.

Rather than focusing solely on running and remembering, the newly inaugurated Team TAPS will incorporate biking, walking, Ironman competitions, triathlons, swimming, tennis, and other competitive events that our survivors and friends would like to enter.

In the same way that running will expand into additional categories for Team TAPS, "remembering" our fallen will expand to incorporate the motto, "Celebrating the lives of America's fallen heroes."

When asked about the change, team director Marie Campbell said, "While we honor and pay tribute to our fallen heroes through these events, it is important that we remember and celebrate their lives and legacies."

We invite you to check online for events for the coming year. If your community sponsors an event you don't see listed as a Team TAPS event, you can still register and participate. TAPS is happy to provide a fundraising web page, newsletters, chats, and recruiting tips to support your efforts.

To sign up or get involved, write to teamtaps@taps.org, call 800-959-TAPS, or visit Team TAPS. Let’s get started!