Volunteer (noun): 1.a person who chooses to join the military; 2. a person who does work without getting paid to do it. Although these two definitions from Merriam-Webster may not define every TAPS volunteer, they certainly define 2nd Lieutenant John Rhoten, as he serves our nation’s Armed Forces and TAPS. 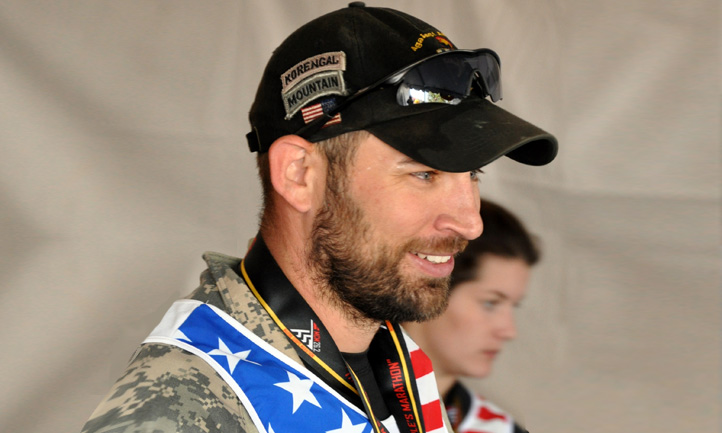 John, a native of Stafford, Virginia, enlisted in the U.S. Army in October of 2002. Since that time, he has deployed to Iraq twice and served in Afghanistan as well. Having served in many postings, it wasn't until he was stationed at Fort Myer with The Old Guard that he heard about TAPS. John first became involved as a military mentor during the 2011 Good Grief Camp.

"When I decided to volunteer, I felt that I was in a place to help others," said John. "However, like a lot of mentors, I wish I had volunteered sooner." Working with TAPS as a Good Grief Camp mentor has helped John in ways he never imagined. "As a service member you try to mask your own emotions and feelings, but volunteering with TAPS has helped me cope with my own grief, and I am eternally grateful for that."

John has had the opportunity to be paired with the same child during the past three years. "Spending time with my mentee and watching him grow as a young adult has probably been the best experience for me," said John of his favorite thing about volunteering. "I look forward to seeing him serve as a mentor with the younger age groups next year."

Since his first TAPS event, John has committed himself to TAPS children for several reasons. "I continue to volunteer with TAPS because I feel that the children need to know that it is okay to have the feelings that they have, to reinforce that their loved one's service mattered, and that they will never be forgotten."

One of the best things about volunteering, according to John, is "seeing the kids make connections with each other. Some of them come into the camp not knowing what to expect or what's going to happen." Seeing that, through the work they do with each other, they are able to share their own personal experiences, possibly even for the very first time, has been rewarding.

No matter where he is stationed, John remains committed to TAPS, ultimately adding to the success of the organization. We are truly fortunate to have someone of such stature as an advocate for TAPS and hope to have him around for years to come as he continues to serve.