While cleaning out the top of the closet in the front hall this summer, I saw a box I didn’t recognize way back in the corner. I had just discovered the long lost television remote on top of it. Why would someone put the remote in the hall closet? Now, my memory is not what it once was, but I am pretty sure we never had the TV by the front door. 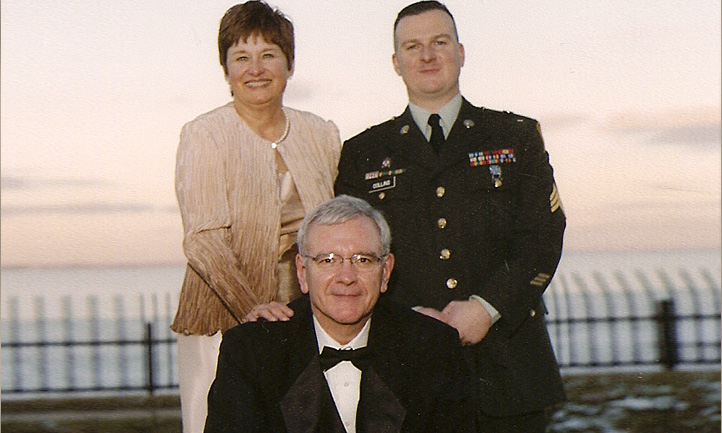 I took down the box and saw that it was addressed to me, but had never been opened. The return address was Apple Products. Why hadn't this been opened and put by the computer?

I felt a small sense of foreboding. It wasn't that it was strange to find something in an odd place (note the remote). But this was something I had absolutely no clue about. I stared at the box trying to jog some corner of my memory. It couldn't be something from the Army regarding Jim's death-all of that would have been done in person. Anything that was mailed later would have been opened immediately. I went to the kitchen, got a knife, and slit open the side of the package. When I saw the corner of what was inside, I remembered what it was.

Feeling like I had been punched in the stomach, I suddenly had to sit down. This box held the calendar I had created in the spring of 2007, a few months before Jim's death that August. I looked at the picture of my son, his wife, and my grandchild on the cover. This was the Christmas gift that would remain forever un-given.

I remembered looking through hundreds of pictures and painstakingly scanning many of them, selecting just the right ones to place in the calendar. It was a delicate task. There had to be just the right mix of old pictures of him, pictures of Jim with his son Dawson, and recent pictures to include his new bride. After hours of effort I had emailed it off to be printed.

When the calendar arrived, I had stuck it on my secret Christmas shelf—at least, I thought it was secret until a few years ago when my daughter told me that she and Jim, beginning at about age twelve, had opened and rewrapped all their presents and even practiced their looks of surprise and delight for Christmas morning.

After Jim’s death, I had given some of the other gifts intended for him to Dawson or to Jim’s friends. Seeing this box now reminded me of the other perfect gift we hadn’t even had time to purchase that year… Jim was a Red Wings fan. When he was home and we watched a game and the Wings won, he was in a good mood all week. If they lost, we all would find something to do somewhere else in the house for a couple of hours. When he deployed, I was instructed to save any mention of the Red Wings in the sports pages and mail them to him.

What do you get for a fan like that after he returns from a long deployment in Iraq? A pair of Red Wing season tickets, of course. But those tickets were never purchased, and now since Jim’s death, my husband and I have an understanding that when there is a long television report on the Wings, we just switch the channel.

But why hadn't I thrown the calendar away after Jim died? Why had I saved it? I still had all the pictures, and many of them scrolled by every day on my screen saver. I enjoyed seeing them and thinking back to the days those pictures made real again. I had even made Dawson more than one book of pictures to help him remember his dad. So, why did I keep this calendar when I already had so many wonderful memories?

One of my favorite memories was of one Thanksgiving we were expecting Jim home on leave. Two weeks before the holiday, I was on the phone telling my friend how excited I was that Jim would be home. Thanksgiving has always been a special time to me-no presents to worry about, no picnic to be ruined by rain. Just the family being together. I love setting the table the day before so I can do it slowly and enjoy all that gleaming crystal and china. I love making everyone's special recipes.

As I was telling my friend about Jim's arrival in a couple of weeks, I heard the front door open. My uniformed son suddenly walked around the corner, and I hurriedly hung up. Had his Thanksgiving leave been canceled? Had some deployment been moved up? Then I saw the grin on his face. One of Jim's more annoying traits was that he loved to surprise us. Everything was fine; he had just gotten a weekend pass and decided to drive home.

That Thanksgiving, like so many other times, I remember Jim telling us he was dieting and would only have one helping of scalloped potatoes-and then putting a third of the potatoes on his plate for his one helping!

As I pondered my memories, I realized how much the TAPS motto means to me and how it has helped me so many times. Now when I think about things I said (that I wish I hadn't) or things I did (that I wish I could undo), I remember the year Jim drove 900 miles, two times in two weeks. Just because he wanted to be with us. Just because he loved us. "Relive the regrets" must be the exact opposite of "remember the love." When those negative thoughts come, I remember the love and the drive Jim made twice.

So why hadn't I been able to throw the calendar away?

I thought about what that first year of grieving was like. There is so much about that year that I remember with horrible clarity, almost like a slow motion tape. But so much is lost to me forever. Our beloved Darcie Sims taught us with her popsicle analogy that we all thaw at our own rates. That year, I was still thawing.

How did we get through those first holidays without Jim? I know we went away to Canada for Thanksgiving, because it isn't celebrated there. For Christmas, we left very early for our Florida condo, because decorated palm trees would hold no meaning to us compared with the snow and evergreens of a Michigan Christmas.

Throwing away the calendar would have been accepting the fact of that finality. In that first year, and perhaps for some years afterward, I wasn't ready. But now I had found the calendar near the eighth anniversary of his death. Was it an accident that I had misplaced it until I was ready to deal with it?

Now I could acknowledge the finality of our loss-not without a little anger, a lot of sorrow, and many tears, but finally with the hard-learned ability to concentrate on his life, the love he had for us, the great joys we shared together, and all the memories we cherish. We need no calendar to help us remember all of that.