Two and a half years ago today marks the darkest day I've ever known. The day when I was awakened by two dark silhouettes that I could see through the decorative glass panel of my front door. I could have been dreaming. Given the fact that the sun had not risen, that was my immediate assumption. But the silhouettes became much more real as I opened the door, confused and very much afraid for them to speak. Trembling, I had to get our daughter Kiley. She was crying in her crib. 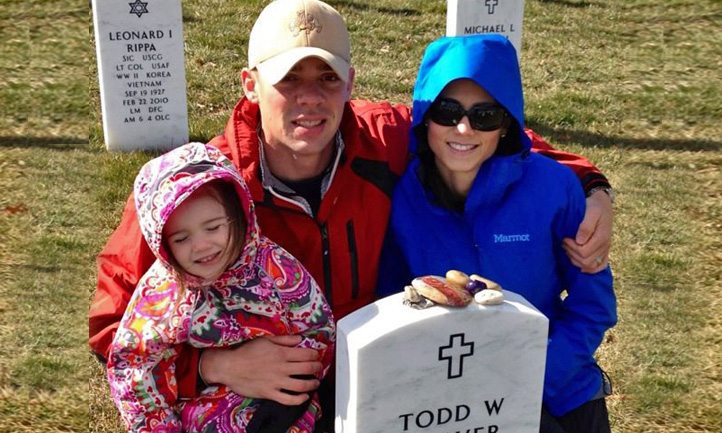 Quite often I'll hear people compliment me on this so-called strength, my ability to inspire others, or my outlook on life after losing Todd. And immediately following such a compliment or kind word, the reaction in my head is always "Why? I'm not doing anything. I'm not trying to be anybody special. I'm not trying to change the world or prove anything to anybody. I'm just sitting here going 'I think I can, I think I can, I think I can'." The mantra doesn't always work. I was reminded of that today.

I had looked forward to visiting Todd’s grave at Arlington National Cemetery more than usual this spring morning. I needed to see him, to talk to him, to be with him before we moved away from the area. I hadn’t visited since Christmas 2012, when Kiley and I had set up his tree. I had tried to find the right words and examples for a three-year-old child to understand sacred places, all the while praying she didn't pick Todd's neighbor’s flowers or move their mementos.

This visit would be harder, but I was shocked once I got there to realize how much harder it really was. We arrived during a sailor's service. It was being held within close proximity to Todd's headstone, so we decided to keep our distance until after the family had laid their loved one to rest. Watching from afar was almost an out of body experience; it was overwhelming. I knew that the woman clutching the folded flag couldn't feel the stinging cold wind that everybody else was feeling. She couldn't see past the casket. She didn't even realize how many people were there to support her and to pay their respects to the young sailor. I knew her numbness all too well. 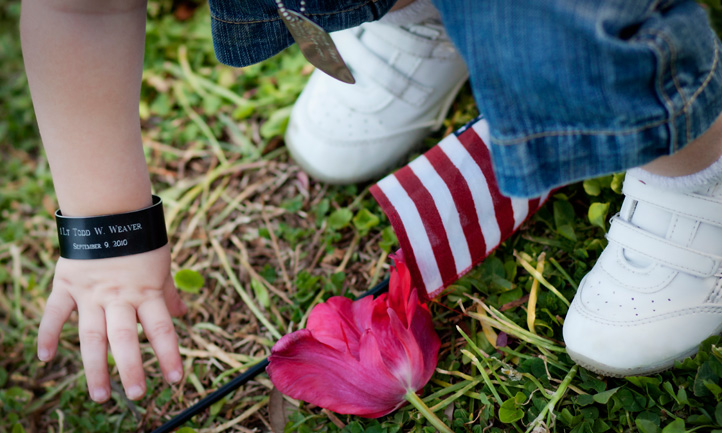 That's when I couldn't keep it together anymore. As I stood sobbing over the grave of the man I thought I'd grow old with, I was renewed by the embraces of my new husband Alex and my daughter Kiley. The fact that I could now collapse into the arms of the man who never lets me fall-being held up by his love and unwavering support-solidified a belief in my heart. That is my strength!

Our world adventure had started two days after Christmas 2012 at The Williamsburg Inn where Alex and I had quietly gotten married in front of our families. Alex had returned to training and I had begun to slowly pack up our house, anxiously awaiting the duty station orders to follow: Guam.

It still boggles my mind that we call Guam home now. That tiny dot in the Pacific Ocean between Japan and Australia is now our home for as long as the Navy lets us stay here. Guam is a U.S. territory fourteen hours ahead of Eastern Standard Time. A land of mountains, caves, waterfalls, jungles, and beaches of coral sands that are gently washed by clear, turquoise waters. Coconuts, plumeria, mangoes, and bananas. A place where the people are relaxed and laid back and always celebrating their culture. Stepping off that plane with my family and taking my first few steps in this paradise renewed my soul.

Guam's most attractive feature, however, has nothing to do with any of the physical beauties I've described. The opportunity for our family was what was most appealing. The chance to walk through a store and not be stopped by a stranger asking me, "How are you?" in that sad tone they save just for me. I know that coming back to Williamsburg was what I needed after losing Todd, but in doing so I was thrown back into the environment I grew up in, where everybody knew me, knew what had happened, and made it difficult to grow through my loss.

Guam has provided us the gift of a new chapter in our crazy lives. I needed to be bold enough not just to say I'm going to live my life like Todd did, but to actually do  it. But strings are attached. I refuse to live without him, and I don't. Todd's urn, flag, recognitions, and awards were the first things to be unpacked and settled in the new house.

To our delight, Kiley has adapted well to island life. She turned four years old on August 17 and started the big day off by asking us if she looked any taller. It is such a blessing to be able to provide her with this unique childhood.

Alex and I found out we were expecting, and the baby is due at the end of January 2014. The excitement of our new world and new path is only intensified as we think about what life will be like as a family of four. I'm sometimes overwhelmed by the many blessings we have been given through having to experience the tragedy of loss. I know we are in good hands and I trust our future will be proof of that.

Looking back, I realize that what can trip us up the most in navigating grief is the "Why?" That one question burrows itself into our minds, multiplying the pain our hearts are already experiencing. I've asked myself that question more times than I can count. The difference now is that I don't find myself questioning why Todd had to die, but rather what his purpose in death means to me and to others. What am I supposed to be learning, listening for, and taking away from the greatest tragedy I've faced in my life?

Three years have gone by. I've celebrated three birthdays for both Kylie and me, found love again, married a wonderful man, moved across the world, and am welcoming a son early next year. But I can still close my eyes and see the shadows at the door, hear my mom screaming when I called home that terrible morning, and smell the dust from Todd's belongings, sent home from Afghanistan. I can feel the pain as freshly as if it were yesterday. And I can do this every single day. But instead I look at how much God has given us since then and try to be thankful for my own life and what He has done with it so far.

It is in these moments that I hope I can continue to honor and remember the hero that I love. Until we meet again in Heaven, I hope we can stop asking why and start asking, "How am I going to make the most of the gift of life I have so graciously been given?"

[Read part one and part two of Understanding a Widow's Heart online in the TAPS Magazine archives.]