(It’s Not What You Think)

When most people hear me say I’m learning to let go, they assume I’m speaking of my late husband, Sergeant Ryan John Baum, who was killed in Iraq on May 18, 2007. Some time ago, I would have drawn the same conclusion, because some time ago I was genuinely trying to let him go. Too much pain, confusion, and uncertainty punched my gut each time I heard his name or recalled our memories. 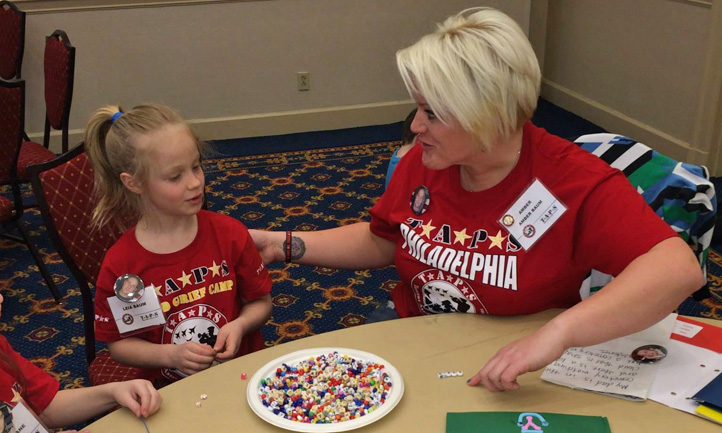 Back on that dark day in 2007, I was coming home from a morning of shopping for Ryan. He had called the night before and asked me to pick up some new pants; he was due home in forty-eight hours to witness the birth of our baby girl Leia. I was nine months pregnant. As soon as I pulled up to our house, I saw them: the chaplain, the rear detachment representative, and a paramedic team. In that split second, my life was forever changed.

For years I lived as the damaged person that moment created. I perilously thought, "If I could just let go of that moment, I could live my life like a normal person. If I could just let go of the fear, anxiety, and panic, I could accept the world as it is. If I could let go of the memories filled with love, happiness, and passion, I could open my doors and allow others to enter my soul." I yearned for the day when I would wake up, and a switch in my body would magically flip from Damaged Amber back to Amber.

Years went by and that day never came. That switch was never activated. I accepted my fate as damaged and adjusted my life accordingly. I desperately tried to live by the phrase "fake it 'til you make it." I thought that if I fabricated my acceptance of Ryan's death, then I would be able to happily make it through my days. I wouldn't live in fear, I would raise our daughter right, I would reconstruct my life, and I would be just another human walking within the crowds of each passing day. All I needed to do was fake serenity while secretly trying to control each and every element which came into our lives. If I could do that, then I would be the perfect duck, allowing others to see the surface of the water, where I'm calm and cool, while obscuring what goes on underwater, where I'm frantically paddling to keep afloat.

This was a great "fake plan," right?

Author Thomas Dreier once wrote, "The world is a great mirror. It reflects back to you what you are. If you are loving, if you are friendly, if you are helpful, the world will prove to be loving and friendly and helpful in return. The world is what you are." In return for living a "fake it 'til you make it" life, I attracted phony relationships, a bogus acceptance of Ryan's death, and a false sense of control. I was the opposite of who I longed to be.

Somewhere along my journey, I began to believe my fake life. Instead of making it, though, I was giving birth to a whole new set of issues, like the inability to distinguish reality from fake-ality. During my failed adjustment, as I forced the issue of letting Ryan go, I brought him closer. His memory became a list of obligations and expectations, all of which crippled me and kept me from accomplishing anything successful or worthy. I wasn't in control of anything. My personal and parenting skills became obsessive instead of supportive. I still suffered from substantial health issues. And my daughter still shed tears.

Each day presented a new and uncontrollable obstacle regardless of how I tried to convince myself or others differently. I wasn't attracting anyone of quality. I surrounded myself with people who didn't even like me, let alone love me. My adjustment was nothing short of failure. Things needed to change.

Enter→ TAPS. Every day I am beyond grateful for the positive change TAPS has brought to my life. I can't begin to thank the TAPS staff and my TAPS peers adequately. Their presence in my life is priceless. Within TAPS, I feel safe enough, sane enough, and able enough to tackle any obstacle. Without them, I would still be lost in my fake existence.

Unfortunately, in those first few years after Ryan's death, I put up a resentful guard against TAPS. Each time I received a magazine it seemed to be filled with smiles and happy people. And each time I asked myself why. After all, we are in mourning and should be sad. I was adamant that TAPS was not for me. Once again, I kept myself from something real and true: the love, support, friendships, harmony, and joy TAPS has to offer.

My first contact with TAPS survivors was in 2010 at a memorial in Colorado, and my first TAPS event was the national seminar in 2012. My life was once again forever changed, this time in a wonderful and heartwarming way. The peer support, peer bonding, and peer comfort blew away a dark ominous cloud that had been hovering over me for far too many years.

TAPS taught me I didn't have to accept Ryan's death. Instead, I could acknowledge it. TAPS taught me I didn't have to get over Ryan's death. I just had to get through it. And most importantly (for me), TAPS taught me that I didn't have to seek closure by letting go of Ryan. I could reconnect to his love. I learned that Ryan would forever be a thread in the fabric of my life; it was up to me to decide how I wanted to weave it. Rather than dwelling on the darkness, I could now take all of the admirable and outstanding qualities Ryan had to offer the world and pay them forward through volunteer work. While he may not personally be present to spread his attributes and character, I am able to let others know how magnificent they were. This is how I reconnected and chose to re-weave my fabric. My life is now vibrant and full of color. It's decorated with real friendships, true love, and beautiful horizons.

So when I say I'm learning to let go, I'm speaking of my faked life. I'm letting go of every fake relationship, I'm letting go of every false sense of control, and I'm letting go of incapacitating expectations. Instead, I'm acknowledging my cards as they've been dealt by getting through the tough days with an immense support system and I'm reconnecting to the love Ryan and I shared, through TAPS relationships and volunteering. There is nothing like the joy I feel when I am able to give someone else the support which once held me up when I had no strength. These are the moments, along with raising our daughter, that I know I am honoring Ryan.

To those who are trying to fake it and to those who are sitting on the fence, I highly encourage you to let go of your fears and join the TAPS family, where we can learn and grow and heal together.