Since the death of my husband, one of my son’s most difficult challenges, aside from dearly missing his dad’s daily physical presence, has been the desire for guidance from this most important man in his life. I have struggled with providing those daily “man” lessons and teaching him how to grow into a good man. I’ve tried my best to convey what is important, explaining what Dad would say in any given situation and filling in what I thought he would do to guide our son Wes. 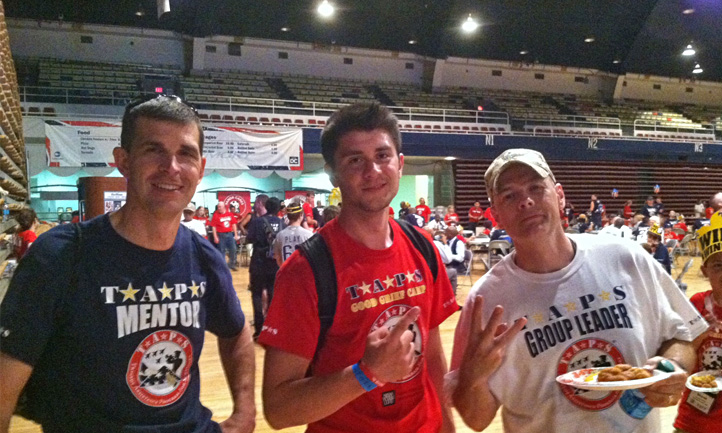 But Wes readily reminds me that I am not a man, nor am I his dad. And he underscores, with an inflection of great injustice, just how cheated he feels by saying he wishes his dad were here to tell him how to conduct himself, "like all the other boys my age." It is very important for him to express that I can never know what he is dealing with, and he is right. I don't.

Wes's last living memory of his dad was at the age of seven, in the midst of the dad hero worship phase. Understandably, he became frozen with the notion of his dad's greatness. Since his dad died in combat, many well-intentioned people verbally canonized his dad with words like heroic, honorable, and noble, creating some incredible pressure for Wes to achieve a similar highly regarded status. Additionally, because of the empty space at the dinner table, my son was also statistically considered to be at risk. These factors cast a huge shadow of greatness to grow in. And yet, Wes learned some real lessons on becoming a man, because he grew up without the "master of the house" in his life. 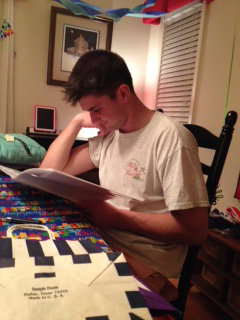 Despite this lack of essential male influence, Wes has grown into an amazing young man. How did this happen? I look at his strapping six-foot-two-inch manly form, noting his remarkable similarity to my handsome husband. I listen to his deep voice, enjoy his keen observations, appreciate his sense of humor, feel confidence in his smarts, and love his stories. He inspires me. He is a young man of his own accomplishments and character.

There are many ingredients that go into raising a decent young man and we have had help along the way. Much of our success is due to incredible support we have had from various men in Wes's life. Although the one man who is most important isn't here, we are lucky to have several others to stand in.

I realized, when my son was about to turn eighteen, just how important these men had been. And thus was born "Project Eighteen." I had a great desire to give Wes a collection of sage advice as he prepared to go off to college and out into the world. This collection would affirm his status as a "good" man-a man his father would be proud of. This would be a birthday gift that Wes could refer to while in college, something to fill some of the big space where his dad would have guided him.

I set about contacting a few good men, eighteen to be precise, one for each year of Wes’s life. These were men who had played an important role in our lives. I was intimidated when I thought about reaching out to eighteen men with such an assignment, yet when I compiled my list of target men, I realized they would understand why I was doing this. I asked each of them to write their thoughts on, “What would you tell your son defines a good man?” I consulted these men because of their remarkable character, their loyalty to us, and ultimately their love. Then I recognized an interesting fact: of the eighteen men, seven of them were in our lives solely because of TAPS—they were in our lives because I picked up the phone one dark day and reached a friendly voice at TAPS.

Over the course of the next few months, each one responded. Some said it was difficult; some said it was cathartic. All said they were glad to do it. Their words were well thought out and respectful. Some were funny. Some were exactly what my husband would say. All spoke to the same message, although in many different ways. When all the essays were in, I printed them and put them in a binder titled, "What is a Good Man." This title was not a question but a statement of opinion. I listed the authors below the title.

I carefully wrapped the book and presented it after all the other gifts had been opened. Wes unwrapped it and flipped it over to read the cover. He examined the names listed below the title. He read them slowly, recognizing each one, and asked incredulously, "Did they all really write in this?” I assured him they did.

My eighteen-year-old is wise and very observant. I can't very often surprise him, but he could not get over that fact that all of these men took the time to write something intended for him. He lingered as he read through the names, increasingly more surprised and remarking with delight. Then he opened the book and read; birthday cake could wait.

I welled up and could feel the love of his dad surrounding us at the dining room table in that moment. Although Wes understands the hardship of not having his dad here to guide him, he could see the blessing in having these men who have stood by him all these years.

Wes read through much of the book right then while his sister and I waited, and it was not one bit awkward. We didn't have the heart to rush him, because he was so immersed. He was finding sustenance in words instead of confection. My boy was becoming a man before my eyes.

I am grateful to the eighteen men who took the time to address things like integrity, honor, humility, listening, obedience, humor, willingness, patience, respect, judgment, and so much more. Their words spoke volumes, and their action of taking time to write the words spoke the language of standing in.

In those painful and hollow moments during the last nine years, when Wes had to learn to tie a tie, shake a man's hand and look him in the eye, ask a girl on a date, drive a car, or take a stand for something, when he most wanted his dad's advice and presence, these men were present in his life. Although he didn't seek them out in these specific moments, they were available and they continued the groundwork my husband laid many years ago. They were there countless times: on hikes in the Rockies, on sailboats, in text messages, at ballgames, in voicemail, at TAPS events, at ceremonies honoring his dad, and more importantly, in the times in between.

I know this project won't replace my son's dad, nor will it answer all of his questions. But having a book authored by some very respectable men will help affirm to Wes that he is on the right course. He will someday be prepared to stand in for others. He already is a good man.