A Successful Formula Toward Healing

A wonderful healing occurs when people gather to celebrate life. It’s a soothing balm for survivors to feel respect for their lost loved ones, and it’s an opportunity for neighbors to show their gratitude for the profound sacrifices made on their behalf. 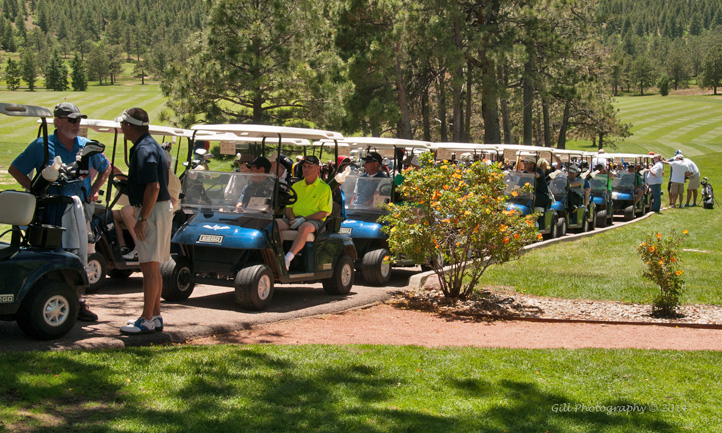 Lynne and Bo Cottrell, directors of the Colorado Celebrity Classic to benefit TAPS, have found a successful formula toward healing: music, laughter, golf, and unashamed expressions of gratitude and humility. It's a powerful combination.

Now in its ninth year, the three-day event held in June in Denver netted more than $250,000 to support TAPS programs. The Dyk and Harris families were title sponsors. Linda Cavanagh and Kevin Kreymborg served as event chairs. The collective energy of our honorary chairs of elected officials, Patriots Committee, and corporate committee of business and community leaders, and an army of more than sixty-five volunteers made the event successful.

The star-studded festivities resumed Friday evening with the Saluting Our Fallen Heroes Dinner Concert. More than 515 guests enjoyed the tasty and traditional pit-roasted prime rib barbeque prepared by the famous Coors Cowboy Club Chuckwagon Crew. A beautifully presented silent auction and fast-paced live auction, propelled by auctioneer Roger R. Seirens, offered gifts from seventy-six generous auction donors and included everything from dinner, spa, golf, and theater tickets to signed sports memorabilia to an all-expenses-paid trip to New York City with a day-long visit on the set and private catered lunch with stars of NBC's The Blacklist. Guests were in a giving mood; even the leftover prime rib was auctioned to lucky bidders.

Entertainers Tony David, Pam Hughes, and Kerry Edwards of WildeFire got the crowd rocking and ready for headliner Jimmy Fortune, Country Music Hall of Fame artist who performed with the legendary Statler Brothers for twenty-one years. Joining his standing ovation performance were vocalists Zach Runquist and Sydni Perry. Steffan Tubbs from 850 KOA radio Morning Show was masterful in introducing the TAPS community led by TAPS Founder and Chairman Bonnie Carroll, as well as the many celebrities from stage, screen, sports, and television that came to Denver to show their support for military families.

The Colorado Celebrity Classic has garnered more than $3 million for TAPS over the past nine years. For their dedication and commitment, Bo and Lynne Cottrell were honored with TAPS' highest recognition, the Soldier's Cross statue. Tom Tarver of Greiner Electric and Jewel Hargrave were awarded the Tony David Volunteer of the Year Award. Both are consistent, versatile, and effective leaders for the volunteer effort.

"Families make a tremendous sacrifice and they should be honored," said Lynne. "We appreciate and honor their loved ones; they are heroes to all of us."

The weekend closed with a shotgun start golf tournament at the prestigious Eisenhower Golf Club at the U.S. Air Force Academy. There were twenty-three teams, with a celebrity golfer on each, and special military teams of airmen, soldiers, marines, and sailors. The Jay's Valet team won first place and the Air Force team won the military competition. Winners were feted at the course following the tournament at the Burgers and Braggin' Rights Award BBQ.

Next year will mark the 10th Colorado Celebrity Classic to benefit TAPS. We can hardly wait!