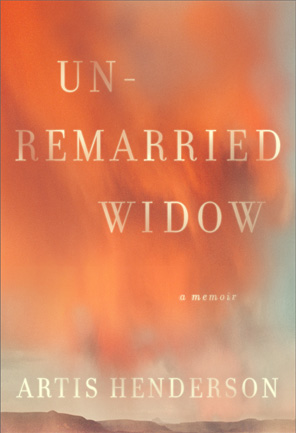 Artis Henderson's Unremarried Widow (Simon & Schuster, 2014)  is her honest, gripping memoir about a fresh, bold love sandwiched between two eerily similar tragedies. I devoured this book with head-nodding agreement, and I am certain every military widow will find an abundance of ways to identify with it.

Traumatic death came calling early in Artis's life when her father, a pilot, was killed in the crash of his single-engine plane. Strapped into the back seat of the plane, five-year-old Artis barely survived the crash. Artis's mother raised her only child to be an independent, educated young woman. By age 23, Artis had spent more than a year abroad, studying and teaching in France. Back from Europe and living in Florida, Artis met her future husband, Miles Henderson, where many a military couple have met-on the dance floor. Chemistry turned this chance meeting into passion and love. Soon Artis found herself living a life she never imagined, in a seemingly foreign world-the world of military installations located smack-dab in the southern central United States. She was the girlfriend, the fiancée and, eventually, the wife of an Army aviator in a time of war.

Artis and Miles were an unlikely match. Miles, a born and bred Texan, was conservative and confident, an Army helicopter pilot straight off a recruiting poster. Artis was a free-spirited non-conformist, an aspiring writer with dreams of traveling the world, the type of travel that would never be confused with a PCS move to a duty station abroad.

Artis made no secret that she struggled with military life. But, honestly, who hasn't struggled with it now and then? In a poignant scene from Unremarried Widow, a newly engaged Artis finds herself at a party hosted by the women she works with at the local school. As part of an introductory, ice-breaker game, each woman was asked to write a question. Artis scribbled down the question that had taken up residence in her waking mind, "What if you love someone with all your heart, but you're afraid that being with him means giving up the life you imagined for yourself?"  The answer came from the others in simple, wise words. "You figure out how to make it work. That's what marriage is." And that's what Artis set out to do. She and Miles shared a once-in-a-lifetime kind of love and topped it off with a genuine respect for each other.

Every military widow knows this love story is split into two parts: the before and the after. The after came early in Miles's deployment to Iraq. Once again, death came calling on Artis. The short life story of Miles and Artis is a familiar one to many a military wife made widow. In place of a happy homecoming when the deployment ended, Artis was dealt a cruel one: the sudden, traumatic death of Miles, a distant location, limited details, non-viewable remains, and the bureaucratic identity of an un-remarried widow, or URW in military-speak.

Onto the pages of Unremarried Widow, Artis spilled out her grief over the loss of Miles. The story doesn't end on a dismal note, though. Out of traumatic loss can come positive growth. Artis saw this growth in the new friends she made at the TAPS National Military Survivor Seminar. She chose to look within herself and ask, "What's next?" This was the same question Miles had posed to her in his "If you're reading this…"  letter.

In Unremarried Widow, Artis does more than tell us her story. With a masterful use of real-life detail, she takes us into her story, and we relive it-as well as our own stories-with her from page one. Artis, you showed us the road through grief is never easy or speedy, but the trip is worth it. Thank you!