Talking About the Hard Stuff

I could be setting myself up for failure as most of what has been weighing on my mind is difficult to discuss. The repercussions could intensify how alienated I feel, but in some lengthy conversations with my personal advisor (Mom), I was gently reminded that if we don't talk about the hard stuff, we don't change the hard stuff. 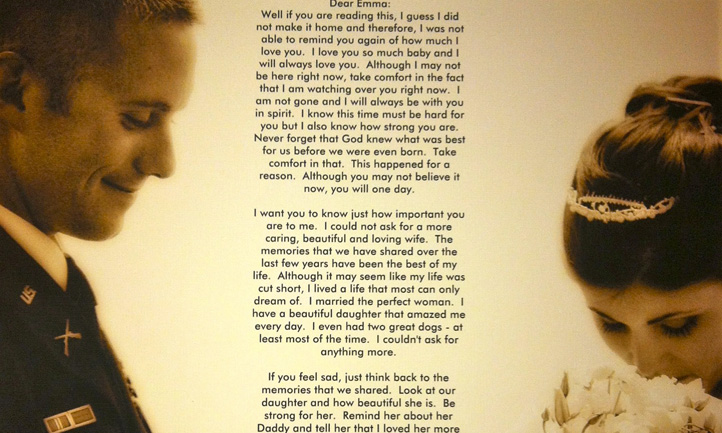 Since last year's global online backlash after sharing Todd's last letters to me and my daughter, I have been less apt to put myself in a situation where I could feel that much judgment. [Note: Emma posted Todd's last letters on her blog and they were copied and pasted worldwide.] Reading the hateful comments from people who must have thought I hadn't suffered enough certainly gave me cause to hesitate.

Can we talk about this, please? Because if I sit on it much longer I'm afraid that I'll build up so much resentment that it could be too late. I was motivated to write about and connect on this issue after this morning's sermon at my church. I felt as if, in a room of over 1,000 people, our pastor was just sitting across from me at a coffee shop maybe, hearing my heart and everything I have been through and learned, and verbalizing it in a way that I never could. That will stick with me forever.

Something to consider: being a widow (young or old, with kids or without) does not mean that the person has lost the ability to decide what is best for herself and her family. Many people aren't aware of how much added burden is placed on somebody experiencing grief when everyone else's opinions and expectations are constantly on their mind. I'm going to tell you something I haven't talked about before and I wish I didn't feel like I had to now. 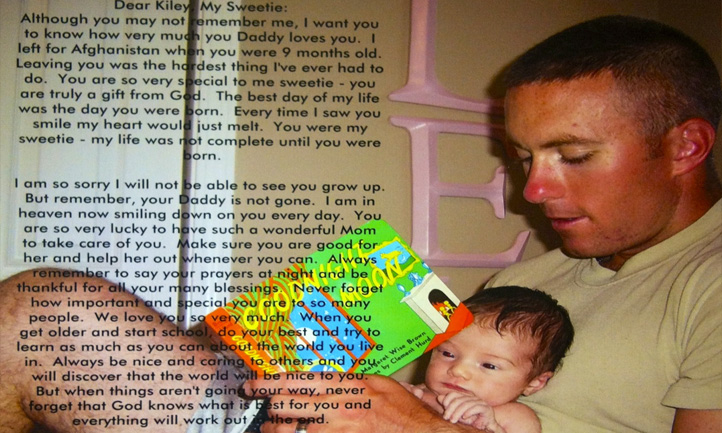 The day before Todd deployed, we were sitting upstairs in the office finishing my battle book. For those of you who have never heard of a battle book, it is a directory of every important piece of information that you could ever think of in order to take care of a military spouse's daily routine in an emergency. If I were to be hospitalized for whatever reason during Todd's deployment, somebody could look at this book and know when to feed the dog, where we kept medicine, and what our daughter Kiley's needs were.

The more important part of that book goes through subjects that we don't ever want to have to consider as a possibility. But it was a possibility. And so we talked about Todd's funeral wishes if he didn't return from Afghanistan. We talked about wearing a uniform versus civilian clothes. We talked about what he would like to take to Heaven. And as painful and upsetting as these discussions were, if the worst were to happen and we hadn't talked about it, I might have questioned every decision I made, wondering whether it was what he wanted.

The hardest part of that conversation was when he told me about wanting to be buried at Arlington National Cemetery. He'd never mentioned that before, and I didn't ask why. That's what he wanted, and I didn't need an explanation. If my husband had to come back to me under red, white, and blue, he would get whatever he wanted. No questions.

But I wanted to know if I would be able to rest there with him when my time came. He just stopped writing, looked at me, and said, "Well, I've always assumed you would remarry," followed closely with, "Kiley needs to have a dad." I can't imagine how difficult that thought had to have been for him. It hurt me to hear it because it wasn't a reality I wanted to live. His tone of voice said more than his statement did; he was serious and tender at the same time.

A lot of what Todd communicated in life never had to be spoken aloud, and during this moment-etched into my memory forever-I felt his desire for my happiness come through in a way I'd never experienced before. I've been trying to come up with a way to express the significance and depth of this conversation, but I can't. I can't because nobody else would understand; it was a bond that only we shared-so different than any other, friend or family alike.

Not having shared this intimate detail of our lives until now, it has been hard to cope with the reactions of others from the moment I started dating Alex. Somehow, the peace that I had-knowing my husband's heart better than anybody-got buried underneath the blanket of unspoken disapproval and abandonment. I started to question whether my decisions for what Kiley and I needed for our future could ever be embraced with love and understanding.

To be totally honest, I don't feel like I'm even a factor in some people's minds anymore. Emma Weaver was replaced with Todd's widow. A bookmark in time, placed at September 9, 2010. Losing a spouse is emotionally devastating, but what makes it worse is that you have lost not only the person you loved, but also your identity as well as the hope that you'll be supported.

Take care of a widow's heart. We just ask for understanding when the time comes for us to move forward in our lives. Maybe our decisions aren't the same as what you would do or hope or expect. But you haven't lived through what we have lived through, haven't lost what we have lost.

This next part is where I'm going to call myself out, and others, too. All I can do is pray that by acknowledging my awareness of it and my desperate hope to connect my heart to yours, it won't be the last bit of communication I ever get to have with some people.

Let’s talk about social media. I take Todd's memory, along with all that I can teach and share with Kiley, very seriously. She needs to know what a great man her father was. And at the same time I want to balance that remembrance with our present and our future. Being able to express happiness again is amazing. Something as simple as a status update or life event is monumental...to me. So like every other person out there, that's what I do.

Except I started to take notice of who commented, liked, or messaged me. A trend was starting to appear. Any time I talked about Todd or tagged a picture of him, I was overwhelmed with positive feedback. Battle buddies, co-workers, old friends, new friends, mentors, strangers, you name it. It was encouraging.

Sadly though, my audience that commented on anything having to do with the concept of "moving forward" was much smaller. It hurt because I was acutely aware of the differences I was seeing. I can only hope that you'll hear my heart now. I'm letting you know how painful it has been to feel that I have lost not only Todd, but the ties to people he cherished on earth, too.

Take care of a widow's heart.

[Read part one and part three of Understanding a Widow's Heart online in the TAPS Magazine archives.]