The second anniversary date of my son's death was April 26, 2014. Another Gold Star Mother had told me the second year was worse than the first, and I didn't believe it. But it was true in many ways. 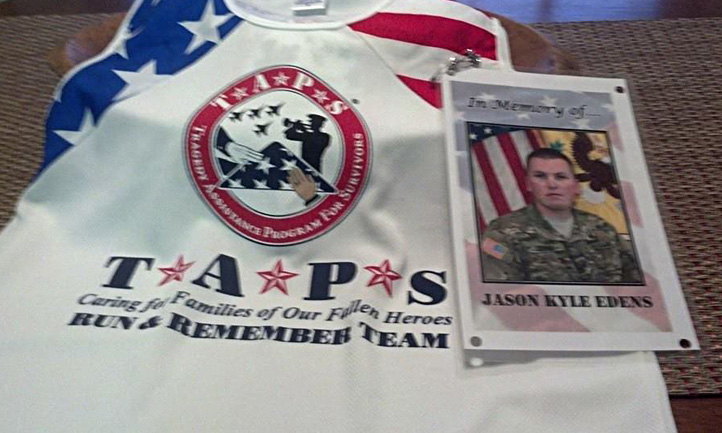 Jason is buried several hours away from us, so we had made a special trip on the first anniversary of his death. I had known for several months that we would be going to his grave, and the stress and tension built each month it got closer. Why was that visit going to be different than the ones before? Because it was a major milestone signifying the ending of all of the firsts.

My husband Mike and I drove to the cemetery that day with my step-daughter and her husband. We lit candles and I stood there and stared at it and cried my eyes out. Yes, it was true. Yes, my son really was buried in that grave. Yes, it was now reality more than ever. And yes, I had to face a second year of living without Jason.

And so the second year began. Each day I continued to get up and pray that it had all been a bad dream. Each morning on my way to work I vowed that I was not going to cry. But a song would come on the radio or I would see a Little Tykes yellow and red car in someone's yard, and the tears would flow. On the way home from work I would make another vow and yet again fail to keep it. I continued to make the vow, though, because I was confident that one day I would make the entire 17 miles without tears, right?

After that first year it seemed like the world had moved on, but I hadn't. I struggled each day with the need to be productive and to carry on with my life, but worried that I would forget. Crazy, I know. How could I ever forget that my child was gone? I remained as active as I could and tried to keep my mind occupied. If I went for a period of time without thinking of Jason, I would almost panic and have to reassure myself that it was okay.

All I had of my son were the memories, and they would come at me like a knife sometimes. During the first year, I was in a daze, but the second year everything seemed crystal clear. I would see his pictures on the wall or see them on my computer, and the tears would fall. I would be sitting at my computer in my home office and look up to see his Gold Star flag and lose it. I would look at his flag case and medals. I could go on and on with the many triggers. The first year I don't think I saw any of that stuff, although it was there. They say the brain has a way of protecting us until we are capable of handling things, and I now understand what that means.

Yes, the second year was worse in many ways, but there were also positive things in my life. The tears came less often, if you can believe that. I met many wonderful people through TAPS and other avenues which supported me and continue to support me in my journey of grief. Some come and go, but many remain. I truly believe that God puts the right people in your life at the right time and place.

In order to combat the continued grief, I got more involved with the community during my second year. I became part of the Big Brothers/Big Sisters program and have a "little" sister. They say in helping others we help ourselves, and I have found it to be true.

I also continued to pursue my love of running in the second year. My team and I raised more than $4,000 for the TAPS Run and Remember Team at the Soldier Marathon at Fort Benning in 2013. I had run my first marathon in 2004 and had forgotten how painful the training and the actual run was. But I decided to do a second one in Jason's honor despite the fact I had promised myself I would never do another! This time I had extra motivation for running through the pain and, believe me, it was painful.

The course started at the historic National Infantry Museum in Columbus, Georgia, and wound itself for six miles through Fort Benning. Then it continued along the banks of the Chattahoochee River on the Riverwalk to downtown Columbus. During the marathon, my knee went out halfway through the race. I kept going for the other 13.1 miles in severe pain, but I was determined to finish. Quitting is not in my vocabulary, and all I could think of was, "I have to do this for Jason." Even with the pain, it felt good to finish.

As I approached the finish line, I saw my husband and three drill sergeants from Fort Benning standing there waiting for me. I was about an hour behind my estimated finish time, so they had been waiting quite a while. Mike had told the drill instructors about my reason for running and they had decided to wait as long as was needed. When I saw that they were holding Jason's picture board, I just started crying. They escorted me to the finish line holding up Jason's pictures while tears flowed down my face. That was an amazing moment. I felt like Jason was looking down and laughing at the sight of them, urging me on.

As we neared the second anniversary the following April, a friend said to me, "Wow, has it only been two years? It seems longer." Not to me... It still seemed like it was yesterday that I was holding Jason's hand, standing beside the hospital bed and watching him take his last breath. I was afraid to move on because I felt like I would forget. I know everyone hasn't forgotten, but sometimes it seems like they have.

I have moments that I think I am truly blessed, but then the reality of my loss hits me again. I am trying really hard to find that balance of grieving and missing my child but trying to carry on and do the best that I can. I know this will get easier, and eventually I will balance it better. I also realize that I don't give myself enough credit. It has only been two years; I try to remind myself of that, also.

Now I look for races and activities that are specific to veterans or military, along with any charity that may benefit someone less fortunate, because yes, even with the loss of my child there are always others less fortunate than I.