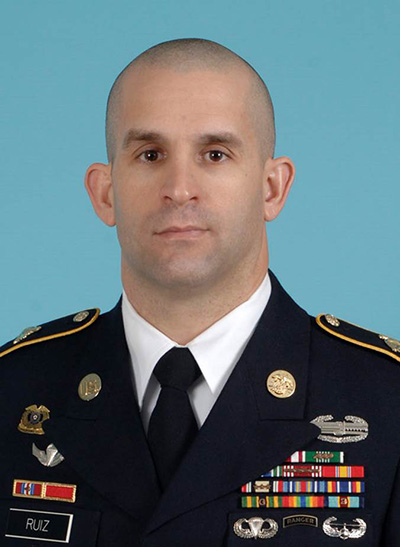 Army soldier of 11 years, husband of 19 years, father of a 19-year-old daughter in college, part-time student pursuing a degree in Management Human Resources…you’d think he’d have no time to volunteer. But that’s where you’d be wrong. Sergeant First Class Pablo Ruiz, III, is a dedicated TAPS volunteer. In the two years he has been volunteering for TAPS, his commitment has surpassed all expectations.

As an active-duty member of the United States Army currently serving with the 3rd Infantry Regiment, Pablo has the responsibility of leading 33 soldiers and considers himself a mentor to them, both at work and outside of work, in his leadership role and personal life. With three tours to Iraq, Pablo is no stranger to service, and he's also no stranger to loss.

During the 2007 surge, Pablo's close friend died after being hit by enemy fire. Pablo was the first to reach him, pull him out of the position, administer first aid, and put him on the medevac helicopter.

"That was truly the hardest thing I've ever done," said Pablo.

Pablo first heard about TAPS in 2013, prior to the 19th Annual National Military Survivor Seminar and Good Grief Camp. As soon as he read about the opportunity, it just made sense to him to volunteer as a Good Grief Camp Mentor.

"The decision to be a mentor wasn't hard at all," Pablo said. "I would want this to be done with my child if something happened to me." Donating his time through what is normally a four day weekend for most active-duty service members "is replaceable," he said, "but the time with TAPS over Memorial Day weekend isn't. A piece of their family is gone; four days is something I can take anytime, so it wasn't a factor," in deciding to donate his time to our organization.

As a mentor, Pablo formed an immediate bond with his mentee. "We kept in touch through this entire year," Pablo said, "and the bond continues to this day." This year, Pablo let his mentee know as soon as he registered, and his mentee requested Pablo as his mentor.

Being a camp mentor spurred Pablo to become more involved with TAPS, starting with TAPS' participation at Mayhem Fest in Bristow, Virginia, and then straight into the Courage Campaign with both the Washington Wizards NBA team and the Washington Capitals NHL team. Nowadays he's helping spread the news about what TAPS is, who we serve, and how to get involved. Pablo truly believes in the TAPS mission, and knows that we offer much-needed programs for military families whose loved one has died.

When asked the most difficult thing about being a volunteer, Pablo simply said, "It's enjoyable; it's rewarding. There's nothing hard about it. Being in the military…spending time in the field in 20 degree weather with other men… that's hard."

Pablo looks at his time as a camp mentor as one of his most valuable experiences and always encourages others to participate if they can. Being brought together with his mentee and his TAPS group is important in "getting to know about them, where they came from, and how the military has molded their future," he said. "Even though their loved one was taken while in military service, the children still very much feel that the military is a part of their family."

We in the TAPS family feel the same way about Pablo.

For Pablo, the bond that he shares with his mentee, the joy of the surviving families at the Courage Campaign launch with the Capitals, and seeing smiles on the faces of survivors is what it's all about.