Sitting on the plane from Seattle to Anchorage, my heart was a mix of emotions. I was headed for the TAPS siblings retreat in beautiful Alaska in February 2013. 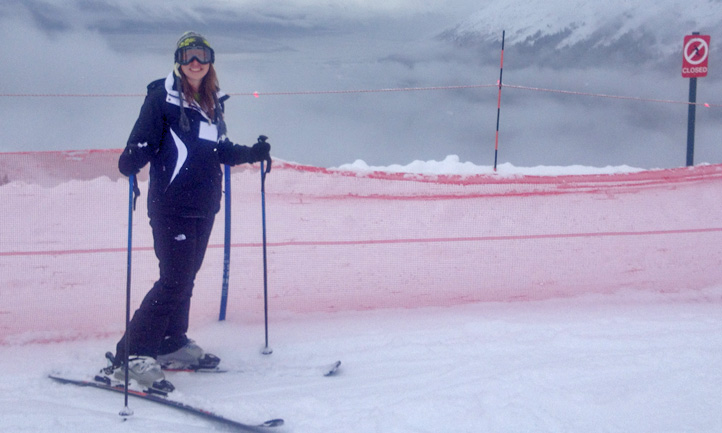 Seeing the start of the Iditarod was something I had always dreamed of experiencing, but never thought would actually happen. Like a lot of my dreams to travel the world, I thought it was out of my reach. When it was mentioned that the TAPS siblings might head north for an early-year retreat in the snow, I jumped at the opportunity.

The weeks and months leading up to the trip were filled with shopping at stores like REI and Gander Mountain. I was determined that despite my fear of the cold, I would be warm in Alaska. Somehow, I knew that cold temperatures could not dull the warmth of my excitement to be there and to be with the other siblings that understood the tumultuous roller coaster of grief.

But sitting on the plane, my heart sank when it hit me that my dream of the Last Frontier was coming true because my brother died.

I tried to stay positive and I genuinely enjoyed all of the amazing views. I actually squealed when we landed. Along with the other TAPS siblings on the flight, I made my way to the USO center and quickly met up with a very dear friend from TAPS who had taught me so much about allowing myself to grieve and opening my heart to others again even though it hurt. I was thrilled to see him and share my excitement.

From the moment we stepped out into the crisp Alaska air and saw the snowcapped mountains, I knew it was going to be a wonderful retreat of healing and rejuvenation with my fellow siblings. I met some of the most incredible people on that trip, some who were further along in their grief and others who were still pretty raw and searching for anyone to tell them it would be okay. No matter how far they were beyond their sibling's death, each one identified with my struggles as I tried to balance the desire for happiness with the sadness of Sammy's absence.

The first day of the retreat was a dream come true. We went snowshoeing near the Alyeska Resort with our amazing tour guide who tromped around in the snow to show us how people were found with beacons when an avalanche occurred. We learned to make an igloo and took photos of each other in front of the North Face. We searched for the tracks of moose and made s'mores over a fire.

And we went dogsledding, something that makes me cry even now when I think about crossing that item off my bucket list. Although we were going nowhere near as fast as Iditarod mushers, I'm sure, my heart nearly burst with excitement as I witnessed Alaska from a whole new perspective behind those beautiful mutts. I'm pretty sure they were just as excited as I was.

With the weather abnormally warm for Alaska's dogsledding season, I decided there wasn't a better way to spend a late afternoon than taking in a run in the 20-degree air. My friend and I made our way through a path, up and down small hills that I was unaccustomed to at home. We stopped a couple of times to eat fresh snow since neither of us brought water bottles. It was clear I hadn't been running in a while and even if I had been, I wouldn't have been ready for my feet to travel over the thick snow and the somewhat steep hills. Finally, maybe a half mile out, we stopped just to take in everything around us.

We talked about my brother, Sam, and I confessed that tucked between the pages of my Bible was the last Christmas card I ever wrote to him-the only one that was never sent. I had been lazy about finding the deadline dates to send cards and packages to APO addresses, and the card never left the top of my desk. It was written, addressed, even stamped. And I was so busy in my own life that I didn't take the time to walk it to the mailbox.

I was ashamed of myself, of how naïve I was to assume Sam would always be there to get the card, even if he didn't receive it until he got home from his deployment. The regret was consuming and the card was always with me as a reminder of my selfishness.

My friend shared a story about his sister and how he had to learn to forgive himself of his own regrets. He had to learn to extend to himself the love he so willingly gave to others. He didn't judge me for my shortcomings. Instead, he listened and encouraged me to grow through the grief process. And grow I did.

It was there in a small clearing on a frosty trail with the sun streaming through the leafless trees that my heart melted right along with the snow from the branches above. I decided to forgive myself-for not sending that card and for not telling Sammy that I loved him one more time. I realized that he would want me to be happy and enjoy the freedoms for which he fought.

There in the great, wide expanse of the Alaskan wilderness, I allowed myself to heal just a little bit. As one of my fellow siblings put it, I had cold hands and a warm heart.

And I felt Sammy with me every part of that trip, from a jaunt in the snow in a bikini to my very first face plant in the snow while skiing, to the sight of the Iditarod dogsled teams racing by me on Fourth Avenue for the ceremonial start of the iconic Alaskan sport. I even felt him beside me as I sang along to Hobo Jim's "I Did, I Did, I Did the Iditarod Trail" with other Reindeer Run watchers. I felt his presence as I fit into a tight spot for a group scavenger hunt photo and did my version of an Irish jig to a Flogging Molly song.

I chose to replace my regrets with admiration and gratitude for Sam's service to my family and our nation. He was a great Marine and an even better big brother, and I want to share his story. I never want anyone to forget his sacrifice, but even more than that, the amazing man that he was.

I'm so indebted to TAPS and to Sam for making my dream trip happen. And I hope I can give back to a group that has given so much to me by running with the Run and Remember Team, raising money to help support future retreats and the care of family members that so desperately need someone to tell them they aren't crazy as they experience the wide range of emotions that come with the grief journey.

I still have my "bad Sammy days" when the haunting memories of December 2011 come flooding in and with them tinges of regret. But I will always remember the days in the snow and how TAPS helped heal part of my heart.