During the dark times in our lives—be they tragedy, loss of a loved one, illness, or abuse—our hearts build up walls as a way to protect us from further pain. How much can one heart take, after all? My husband First Lieutenant Todd Weaver died on September 9, 2010. In my own journey of loss, while simultaneously feeling comforted by knowing Todd is in Heaven watching over our daughter Kiley and me, I also built up my own walls so that I might never have to experience this pain again. 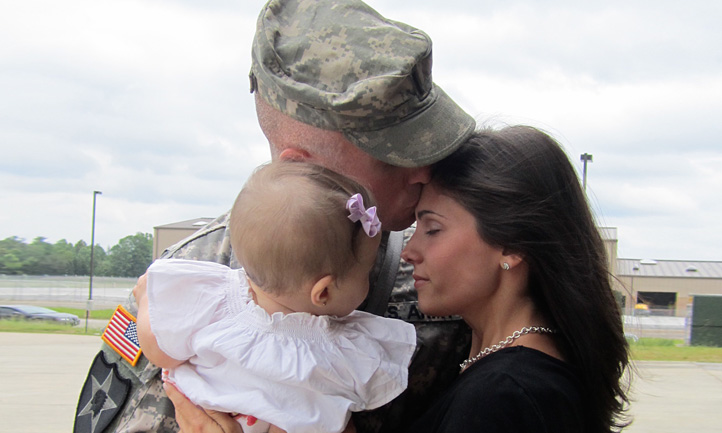 My mindset was one of independence and resilience. Kiley and I were going to be just fine! I wanted nothing except to take care of her and raise her in a way that would make Todd proud. I thought I was strong. I thought I had my head on straight. I was learning that God's plan was above my own plan for our lives. I had to be open to listening for what it was He was teaching us now. I thought I could help others gain a new perspective on death. But I wasn't helping myself.

"Ma'am, would you like me to help you to your car with these bags?" My answer was always, "No, I've managed so far.” I imagined Todd in his last moments: fighting for Kiley, fighting for me, fighting because it's right—to the end. It's what motivated me to continue on and make him proud. If I was ready to quit running, put down the trash because it was too heavy, or scream because my patience had worn thin with Kiley's shenanigans, I didn't. I pushed myself through the task because I reasoned that Todd could have done it and so could I. I owed it to him.

But something clicked about a month ago. My "resilience and strength" was a wall—a wall to keep anything or anyone from hurting my heart ever again. I had been punishing myself by avoiding any idea of happiness of heart, as I felt it would be dishonoring Todd. It was my way of matching his sacrifice. I shouldn't have felt that way. And I know that now.

On September 11, 2010, just two days after Todd was killed, our family and friends had gathered in the Sunken Garden at the College of William and Mary. The ceremony remembered those lost on 9/11, and a wreath was added for Todd, as he was a graduate of the college. A man who was a student with Todd had come to pay his respects. He was a familiar face. He expressed his condolences and tried to brighten the mood by talking about some of the good times with Todd.

A few months passed with a few "hello's" and "how are you doing's" from this man, Alex. He began to make himself available to listen to our story. He had become a very good friend. I could share what I was feeling and everything we'd been going through. I enjoyed talking to him and laughing with him—but I couldn't read him. I wanted to make sure he didn't misinterpret the friendship because that door was closed and locked. And then he deployed.

A few more months passed, and the door was still locked. I was just fine with having a friend to talk things out with. And then he was injured. During a training exercise, Alex sustained an eye injury and had to be sent back to the states for treatment. That’s when I decided I needed to go see him. When he opened his door, I unlocked my mind's door.

It is now clear to me that our hearts and our minds will not let us do things that they know we are not ready for. And my heart decided it was ready to take risks again. Because that's who I am. I was built to support the people I care about. To stand beside them in times of trouble. I wish I could have learned this lesson in a book rather than having to live it out—but losing Todd has taught me so much about what I value now, what isn't worth holding onto, and what is. I feel like I've gained an entire life's worth of lessons since Todd's death. Because of that, I have been able to walk with Alex as he navigates the uncertainties of his healing and the future of his career. He had been so helpful to me from early on and I was blessed to be able to give that back.

Todd's fingerprint is permanently pressed into my heart. He will never leave. It is not possible. Our daughter will know him to the best of my ability. My family tree doesn’t change because Todd is gone. He didn't walk out the door; I didn't divorce him. He was sent home to Heaven. I have been blessed to be supported by family and friends when the opposite is all too often the case for widows. They get pushed away. Erased.

Knowing how lucky I am to have such a great relationship with my in-laws, I was scared of the thought of changing that, based on my “moving forward.” Of course, this was all in my head and totally irrational. I knew they wanted only for Kiley and me to be happy, but I was scared. Scared that a new relationship could be interpreted as a replacement for Todd. I care a lot about what others may think. And maybe that's something I have to work out on my own.

I have accepted that I don't fit in a box. You can't tie it up with a pretty bow and slap a tag on it. I'm going to be sad...but more importantly I'm going to be happy. And I am. I'm happy that after all we've been through, God brought us a man who has the strength to walk beside us on this journey, accepting this life we live and sharing in it with us.

I love a man in Heaven. I always will. Todd Weaver gave me more in six years than I could ever have imagined for myself, our daughter being the best part. But I also love a man on Earth: Alex. This love doesn't replace what I had with Todd, and I don't want it to. Todd was a part of my life so that I could cherish the memories, learn from them, and grow. One of the beautiful things about Alex is that he gets that. His being in our lives is a gift. He is his own man, different in so many ways from what we had, never replacing, but broadening and building on where we've been.

When I saw Alex after his fourth eye surgery, my heart could not ignore how much this man meant to me. As devastating as this experience has been, both my own and now his, we lean on God and each other knowing that our plans don't have much to do with God's plans. And it is His plan to put these challenges in our lives, building our character, creating the experiences that give our lives meaning and value. What kind of a life are we living if we can't come out of it saying we learned a thing or two?

I don't know what the future holds. I'm not supposed to. What I do know is that I'm happy, and hopeful that as we navigate this relationship there will be more to share. Alex, Kiley, and I are on our own journey. And Todd's spirit will always be with us, experiencing the milestones to come right along with us.