“We shared our dreams, cried until we were sick, and laughed hard with each other because we felt safe enough to do so in our own company.” ~ Bonnie Carroll 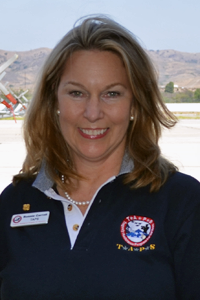 Following a 1992 Army National Guard aviation accident that took the lives of eight service members, a small group of survivors discovered new strength and the beginning of healing when they turned to each other for comfort. Connecting with each other, they found the support and understanding they had been seeking. At the time, no formal organization existed that provided a place where they could share their pain while also reflecting on the pride they felt for the service of their loved ones.

From this informal group, Bonnie Carroll took the initiative and began to research best practices of national peer-based support groups. In 1994, TAPS was born, giving military survivors a national organization in which to connect with others and seek support.

The first TAPS National Military Survivor Seminar was held in the nation’s capital in 1995, drawing survivors from around the country. Within a few years, TAPS had caught the attention of senior military leaders. In 1997, General John Shalikashvili, then Chairman of the Joint Chiefs, noted the importance of the work TAPS performed, saying, “I have been thinking since I heard about TAPS: why is it that the military never created something like this? And then it became patently clear to me that there’s no way to organize something like this in the military. It can only be done by people who have walked this very difficult road before you, and who are now willing to devote their energies and their caring and their heart, to take your hand and say: walk with me, I can help you.”

Under General Shalikashvili’s leadership, the Chiefs of Staff of each service branch directed their casualty officers to connect families to TAPS, a practice that continues today aided by formal Memorandums of Agreement.

By 2001, TAPS had laid the foundation to be available to assist families during one of our nation’s darkest hours. Following the September 11 attacks, TAPS was called upon to support families at the Pentagon. For weeks, TAPS staff and volunteer survivors provided constant support, understanding, and compassion to newly grieving families.

In the years that followed, TAPS embraced thousands who experienced the death of a loved one in the Global War on Terror. Along with the increase in combat deaths, training accidents, fatal illnesses, and suicide deaths rose significantly. With the compassionate care that began in 1994 and the work of a small, dedicated group of people, TAPS was able to expand and meet the challenges and needs of the ever-growing number of newly grieving families, while adding programs that bring TAPS services closer to survivors.

Over the years, individuals, groups, and corporations have blessed TAPS with their contributions to our mission. They share the same dedication to honor the service of our men and women in uniform by caring for their loved ones left behind. Through our joint efforts, TAPS has been able to provide help, hope, and healing to more than 40,000 men, women, and children. These individuals can find comfort and strength together, just as a small group of widows did 20 years ago.

It started with a dream…a dream to remember the love, celebrate the life, and share the journey.