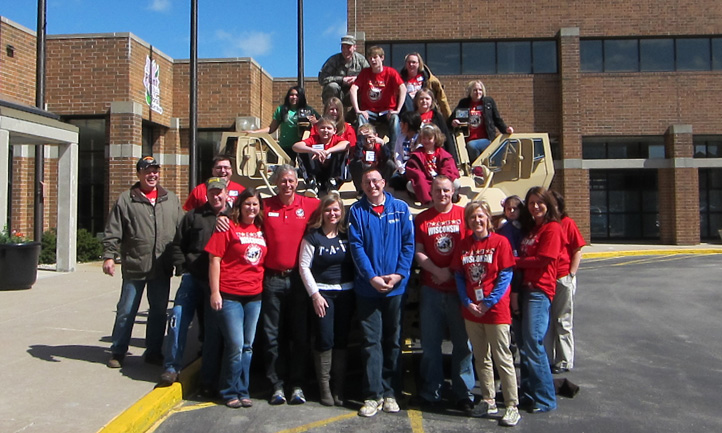 "We're honored to come to work every day to support our nation's heroes with the most advanced military vehicles in the world, and our ties to the military run even deeper than the trucks we build," said John Urias, Executive Vice President of Oshkosh Corporation and President of Oshkosh Defense. "Many of us at Oshkosh, including myself, are retired or reserve military members, or have loved ones who are serving. Supporting TAPS' mission of providing assistance and comfort to the families of our fallen military heroes is a source of great pride for every one of us."

Oshkosh has a long-standing history of charitable giving and support for programs that assist members of the armed forces and their families, both in the field and when they return home. The leadership of Oshkosh fully embodies the spirit and intent of this patriotic tradition. Both by personal example and through exemplary leadership, Oshkosh has been at the forefront of supporting our nation's military and their families. We at TAPS are especially blessed with their far-reaching support through employee volunteer programs, extensive charitable giving, and invaluable partnering opportunities.

Oshkosh's charitable contributions to TAPS have exceeded $450,000 with a portion directed for an annual TAPS Regional Survivor Seminar and Good Grief Camp held in Wisconsin. This year's program will be held in August and is expected to be another resounding success with an even larger participation of survivors throughout the region.

Oshkosh has set a goal of engaging more of its employees in their company-sponsored volunteer programs. This has been especially true in their volunteer support of TAPS, both with programs and fundraising. Oshkosh employees took a very active role in helping coordinate the survivor seminar and camp activities, and they turned out in force as volunteers for the entire weekend.

One of the most successful and creative fundraising campaigns, Supporting the Families of America's Fallen Heroes, has raised more than $200,000 for TAPS. This interactive nationwide campaign, managed by the Oshkosh marketing team, engages individuals through Facebook and signup boards to express their support of TAPS. In turn, Oshkosh donates $2 for every Facebook "Like" or signature on event campaign boards.

Oshkosh Defense defines the very essence of a corporate/nonprofit partnership. Not only have they directly supported TAPS in many important ways, but they have opened doors for event opportunities with the Washington Redskins, the Green Bay Packers, and the Adopt a Military Family holiday gift giving program.

We are so very grateful to the entire Oshkosh team and extend a special salute to Charles Szews, Oshkosh Corporation Chief Executive Officer; John Urias, President of Oshkosh Defense; and Jay Kimmitt, Executive Vice President of Government Operations. Thank you!