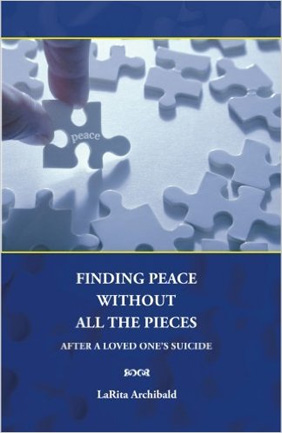 A few months after the suicide death of my beloved husband Ian, my academic side and counseling training kicked in. I decided I was going to learn as much as possible about how to recover from losing Ian to suicide. I scoured Amazon for books on suicide loss and healing and ordered them all. I scanned through a couple of them, but nothing really spoke to me. The books went into a box somewhere and were shoved aside during my move from Texas to Washington, DC.

Last October I attended the TAPS National Suicide Survivor Seminar in Colorado Springs. I met amazing survivors, learned so much about my own grief journey, began to heal, and actually had a lot of genuine laughs with amazing friends. At the seminar I had a conversation with my dad about books that could be helpful to our healing. Unfortunately, I couldn't personally offer very many suggestions. So, upon returning to DC, I decided to actually sit down and read one.

I spent Christmas break reading the beautifully honest book, Finding Peace Without All the Pieces: After a Loved One's Suicide by LaRita Archibald. LaRita is the surviving mother of Roger Kent Archibald whom she lost to suicide in 1978. Finding Peace Without All the Pieces is the sincere, straightforward roadmap to putting your life back together after the suicide death of a loved one.

In the early pages of the book LaRita warns her readers that there will be sections that they may not be ready to read. She gives us permission to skip them or come back to them when we're ready. I chose to read everything and understood what she was warning against. For those whose soul wounds are fresh, I urge you to trust your gut and sensor yourself to skip the chapters that may be painful to read at your particular position in your grief journey. This book is so incredibly well rounded and all encompassing that you will find chapters that seem specifically written for you and your pain, and I am certain you will find healing in whatever sections you choose to read. LaRita's words touched me, inspired me, and, validated my feelings and the life that Ian lived.

In the chapter titled "Is Suicide a Choice," Archibald eloquently shares what she knows of the suicidal mind and helps her readers to release themselves from the guilt and blame so often associated with this tragic loss. I have struggled with the concept of "choice" since Ian's death. This chapter allowed me to see Ian's last act as the most difficult choice he ever made, one that was made out of desperation and a desire to stop extreme despair, rather than that of a choice to leave this world and me. For that realization, I will forever be grateful to Mrs. Archibald.

The section titled "Victim ~ Survivor ~ Thriver" spoke straight to my heart. I read it and remembered my fresh pain-the intense wish to someday be able to go three minutes without crying or physically aching, the desire to one day live a fulfilling life and even, dare I say it, feel happiness again. LaRita chronologically outlines the progression from being a victim of suicide, to being a survivor of suicide and eventually becoming a thriving human once again. While I am in no way "over" my loss-and will never be-I saw my own journey in this chapter.

I attended my first TAPS Suicide Survivor Seminar nearly two years ago, and was most definitely a victim. Through intense counseling, an incredible support system, lots of soul searching, and an unending outpouring of support from the TAPS family, I wound up as a survivor-breathing, laughing, working, and living. Now, after having survived two years without my Ian, I can say that I am thriving.

Finding Peace Without All the Pieces has helped me to patch up some holes in my heart that needed attention, but more importantly, it helped me to recognize and validate the victory of living after such tragic loss. I am certain LaRita's words will touch and inspire those who read them, as they have me. On one of her last pages, LaRita offers the following promise to those aching from the pain of suicide loss. I believe it sums up her entire message and the heartfelt, honest beauty found in her book: "Believe it, my wounded friend. There will be a time when you won't hurt as bad as you do today; a time when you will laugh without feeling guilt; a time when you will again experience pleasure and look forward to each day with gratitude. Yes, there is a time ahead when you will flourish, thrive."