Nicki Bunting may be a busy single mom to two active little boys, but she also cares about helping others and wants to give back to the community. When TAPS Magazine caught up with Nicki by phone in December, she was busy getting holiday gift cards ready to mail to military widows who were struggling. 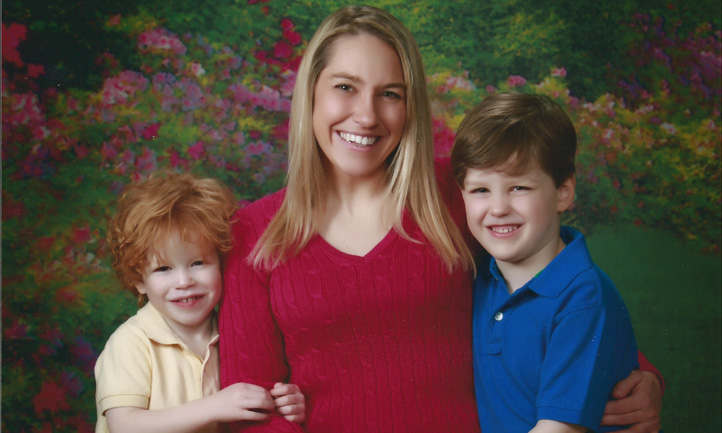 “I know that when I was in my worst of times, I needed a lot of support. To be able to support others when they are in need helps me, too,” said Nicki. She had just gotten home from a cross-country flight to Snowball Express with her older son Connor, and surely could have used a little rest. But she was hustling to get envelopes in the mail before picking up her son Cooper at preschool. That’s typical for Nicki.

Nicki’s husband, Army Captain Brian “Bubba” Bunting, died in Afghanistan in 2009, just days before Nicki found out she was pregnant with their second child. “Knowing that I was pregnant with him was what gave me the strength to keep going,” said Nicki.

A few months into her pregnancy, Nicki founded a 5K race and christened it “Bubba’s Belly Run,” to honor her late husband. TAPS and other Veterans Service Organizations benefited from the proceeds, but the race also helped the public better understand the sacrifices our military make. Thousands of flags lined the course to honor our brave service men and women who died in the cause of freedom.

Nicki got connected to TAPS that year, where she found peer-based emotional support and help with her benefits questions. “TAPS has always been there to answer my questions with the correct answer, which is important—a truly wonderful resource,” said Nicki. “I knew that TAPS was there and that if I needed anything, they would be there for me, no matter when.”

Other members of Nicki’s family also found help through TAPS after Bubba’s death. “For my family, my in-laws, two of my sisters-in-law, TAPS has been there. There are not a lot of resources for siblings. TAPS is the only organization that helps them,” said Nicki.

Cooper never got to meet his father and Connor was only a year and a half old when Bubba died. Nicki worries about how they will grow up without a dad, but finds support in connecting with others through TAPS. “Knowing that there’s an organization there for us for the long haul puts my mind at ease, and I know my boys will be supported,” said Nicki.

Nicki attended the Alaska Widows Retreat in 2011, where she participated in the 5K, raising funds with the TAPS Run and Remember Team while making connections with other military widows. “I feel like I just kind of have a piece of normalcy back. I don't feel like an outsider,” she said.

Although she enjoyed holding Bubba’s Belly Run each year, Nicki made the painful decision in 2012 to stop organizing the race. She felt she needed to devote more of her time to Connor and Cooper. She continues to give back to help others in the military community in other ways.

Nicki will receive the Senator Ted Stevens Leadership Award at the TAPS Honor Guard Gala in March. Inaugurated in 2011, the award recognizes a surviving family member of our fallen military who has reached out to help others. “This award means the most to me. Knowing that the people at TAPS who I look up to so much, think so highly of me, means the world to me,” said Nicki.

At TAPS, we think the world of Nicki, and are grateful for her example of giving back to others.