Since October of 2000 when the first Run and Remember Team of two runners raised nearly five thousand dollars, fundraising has been a part of the team’s efforts on behalf of TAPS. Not only do TAPS runners spend time training for the event, but they also use their skills and ingenuity to raise awareness and raise funds in support of the TAPS mission. 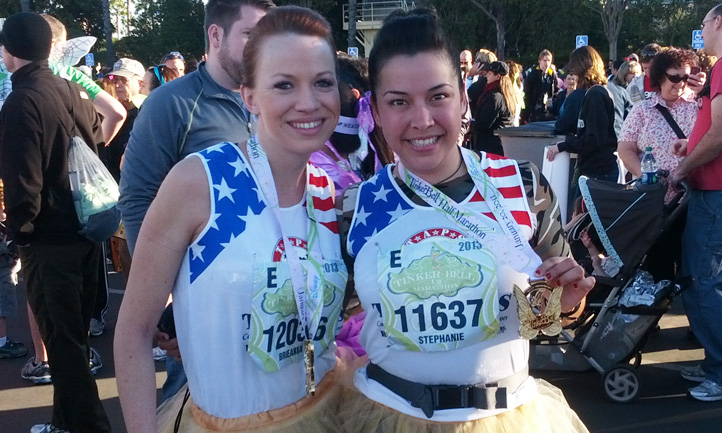 Some runners run only one time, while others come back year after year. They put our loved ones’ photos on their backs for the big event, but for months leading up to the race, they put their hearts on their sleeves and ask friends, neighbors, and community to follow their lead. We asked some of our runners for the secrets to their fundraising successes, and they shared their approach to raising funds as well as their reasons for running.

If you’ve been considering joining the team—whether to run, walk, or cheer others on¬¬—some of the ideas that follow may help you ease into fundraising for TAPS.

Starting in the year 2000, Run and Remember Team Director Marie Campbell has raised between $2,000 and $5,000 each year. In the beginning, she told donors of the impact TAPS had in her own healing. As a “seasoned” surviving spouse, Marie now shares stories of more recently bereaved survivors. “TAPS was there to help me when I needed it, because generous people gave their dollars,” she said. “Now I want to pay that gift forward so that other families can receive the help they need to cope and heal.”

For the most part Marie has the same returning donors each year. She asks only once a year, using Facebook to solicit donations to her fundraising website. However, she shares some of the amazing things that TAPS is actively doing by posting videos or news articles throughout the year. “It gives my donors opportunities to see their dollars at work,” she said.

Ross Harris is an Army veteran who lost a brother in the 82nd Airborne while Ross was still in high school. At that time, TAPS did not exist. “It never crossed my mind that there should be someone I could talk to,” said Ross. “Had TAPS existed, there is no doubt my family would have benefited.”

Ross uses the power of multiplication in his fundraising efforts. Once people donate, he asks them to reach out to others. His family, friends, Army buddies, and coworkers help spread the word and find additional supporters. Ross also created a PowerPoint presentation to show the impact of military death on surviving families. “I am not afraid to ask anyone at any time to support TAPS,” he said. “I just talk to everyone I can and never hesitate to ask for one dollar or ten or a hundred. Once I started talking to people, I kept increasing my goal to ensure that people wouldn’t limit their donation just because I had met my goal.”

Joanie Montgomery has been running in support of TAPS since 2006. She makes use of social media and her imagination in her fundraising efforts. “Tell your friends that to get their money, you will cook for them, clean, or even change your appearance,” she said.

Using Facebook, Joanie posts her fundraising offers. Whether it’s home-baked cookies for donors or taking a pie in the face, she sets the donation at a specified amount and adds the link to her fundraising page. Some offers lend themselves to posting additional photos to generate interest. For a pie in the face, post photos of the pie before and after (on your face) when donations total the specified amount. “The main thing is to think of an incentive, place a value on it, and then post photos of the proof,” said Joanie. “Remember to thank your donors. Everyone likes to see his or her name in print. Get a photo with the donor and post that, too, if you can.”

Scott Schmidt’s secret is in the planning. He starts four months before the race. Working with survivor Dawn Rowe to share her story in his “ask” email, Scott wanted his network of friends and associates to be able to identify with a specific person. “I wanted to differentiate TAPS from all of the other noble causes by showing the human aspect of it,” said Scott. “I think it made a huge difference. It’s much easier to give when you see a face and hear a story.”

Scott made sure he was the first to donate ($200 to set the bar for other donors) and that it was displayed on the scrolling banner on the fundraising website. Follow-up is another key. He sent a note to his list of potential donors every three weeks, giving updates on his training, information about TAPS, and reminders that corporations sometimes will match their employees’ donations. Each time, there was a wave of donations. Starting with a goal of $5,000, Scott reached it in a week. He sent a note of appreciation for the support, and raised the goal to $10,000, followed by $15,000 several weeks later.

Shalan Webb is the surviving spouse of Staff Sergeant Chris Webb. The first year she ran was the easiest year to raise funds. Chris’s death was still recent and many people wanted to support the family. “I sent the letter to every single person I had an email for. If I didn’t have an email I sent a letter through the mail.” The next year she had moved to a new community, but formed a larger team and created a competition among her team members. “I wanted us to be the top fundraisers like we were the year before.”

When Shalan’s daughter Mary was finally old enough to run the MCM Healthy Kids Fun Run, Shalan geared the fundraising to include Mary’s story. “Running is a small way for me to show my appreciation to an organization that means the world to me. I truly have no idea how I could have made it without TAPS.”

Tim Savoy joined the Run and Remember Team in 2011 at the age of 19. When TAPS paired Tim with Patrick Dolphin, Tim reached out to the fallen soldier’s family to learn as much as he could about Patrick. “Patrick’s mom and dad both support my campaign and help me recruit donors,” he said. “In a way, we have become a part of each other’s support system.”

As an undergraduate, Tim’s network of donors consisted of students on tight budgets, and social media allowed him to reach a donor base that he otherwise might not have engaged. His approach was to develop a campaign. Using a weekly video blog on YouTube to encourage donations, he recorded blogs about his training and reflected on Patrick’s life as well as his own. “Even though I am running a one-time event,” he said, “the narrative of my fallen soldier’s story can be told over the course of several months.”

Tim runs for TAPS because it reminds him every day of the sacrifices made to protect our country. “Patrick and I will never know each other,” he said, “but I feel like I know him because of my journey with TAPS. Even as I reflect now, I think about how much more we can do to support our soldiers and their families. TAPS has forever changed me for the better.

For more information about running, fundraising, or having your loved one paired with a TAPS Run and Remember runner, write to teamtaps@taps.org. You may even find that healing comes your way as you set out to embrace the mission of TAPS and give back so that others who follow will find help, hope, and healing.