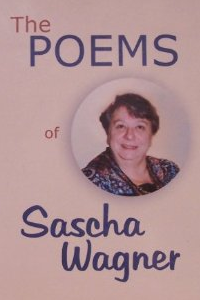 This holiday season, if you are looking for a gift to give to yourself and perhaps to others who grieve, I would like to recommend The Poems of Sascha Wagner. It’s a volume of poetry sold exclusively by The Compassionate Friends (TCF). TCF was started in England almost forty-five years ago and has grown to become an international self-help organization offering friendship, understanding, and hope to families that have experienced the death of a child of any age, from any cause.

But don’t let the relationship stop you from ordering this book if your loved one was your spouse, sibling, or parent. The Poems of Sascha Wagner contains 184 pages of comforting poems along with the occasional heartfelt saying coined by Sascha Wagner. While some of the poems and sayings reflect Sascha’s relationship as the mother of not one, but two, children who died, many of the poems will resonate with anyone who grieves.

The poems are written in simple, forthright language, making the book perfect for readers of all ages. Although the reading is easy, the messages are profound and thoughtful. They are especially helpful to those who are new to grief, but also bring light and hope to those who are farther along.

The book is divided into five sections that mirror our journey on the strange path of grief. The first section, titled “At First,” details the early days of grief and the unanswered questions our souls agonize over. The second section, titled “Findings,” shows us the miniscule signs that point to areas of small progress and hard-won healing. The third section, “Bittersweet,” brings up recurring themes, while the fourth section, “Full Circle,” details the calendar cycle from New Year’s Day to the winter holidays, including both Hanukah and Christmas. The last section, titled “Endowment,” contains reminders of the legacy of our loved ones. You can pick up the book and find solace for a few brief moments or spend an entire evening basking in the comfort and love of a person who has walked the road of grief ahead of us.

I find it remarkable, if not downright difficult to believe, that English was not Sascha’s first spoken language. Born in Bremen, Germany, Sascha immigrated to the United States in 1947. Her new life in America was tragically marred when her son Nino drowned. Fifteen years later on the anniversary of Nino’s death, Sascha’s daughter Eve died by suicide. Having lost her only children, Sascha managed to survive and persevere, earning a bachelor’s degree from the University of Colorado in 1968 and a master’s degree in 1975 from the University of Denver. After spending thirty years in various areas of mental health work, Sascha initiated a professional support service for persons with panic disorders and/or agoraphobia.

Before her death in 2003, Sascha provided workshops internationally as well as writing several small volumes of poetry. Her poems have provided solace for bereaved people for years, having been used extensively in TCF chapter newsletters. After her death, Sascha’s estate awarded the copyrights for Sascha’s writing to TCF, so that her words could continue to encourage others whose hearts are broken.

You can order copies of The Poems of Sascha Wagner from the The Compassionate Friends (TCF) website. But don’t wait too long if you want the book for the holidays, as quantities are limited.

By Betsy Beard, Surviving mom of U.S. Army SPC Bradley S. Beard: Betsy Beard served as the editor of TAPS Magazine for seven years in addition to volunteering as a peer mentor, care group facilitator, and national workshop presenter. In that time she authored a number of TAPS publications and Quick Series Guides, as well as the award-winning children's book, Klinger: A Story of Honor and Hope and many articles for TAPS Magazine. Betsy has been published in Living with Loss publications and various newspapers. She currently is a freelance book editor and serves as the awards director of Military Writers Society of America.  She lives in North Carolina with her husband, Randy.