When I was about three years old, I received a diminutive barrel-back rocker for Christmas from my aunt and uncle. Secured against the bottom runner was a little music box that would play a tinny melody with each forward motion. And when I rocked back, the music stopped. I don’t remember what my brother received that year, but I’m certain it paled in comparison to the significance of my gift. I loved that little chair, and when I left home to start my own family, it traveled with me. 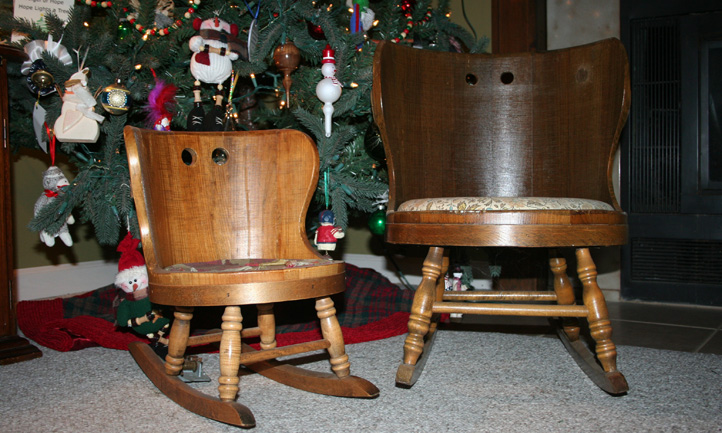 The year my daughter turned two, I had her picture taken with that little heirloom, thereby doubling the sentimental value for me. Of course, she isn’t sitting in it but rather escaping it, forever captured in print with an obvious “no” on her lips. As long as there was no camera around, she spent hours rocking in that chair during her toddler years, creating her own melody with the rocking motion.

Many years later, I had that oaken treasure refinished by a dear family member, who lost a short but valiant battle with cancer shortly thereafter. At the time of refinishing, she didn’t yet know that she was ill, and I’m thankful to have a piece of her talent to remember her by.

It is mystifying to me that an inanimate object can hold such a special place in my heart. That rocker may have been just an ordinary gift for a rambunctious toddler long ago, but today, it tells so much of my life story. When I look at it now, I hear the music and feel the love of my paternal family. I remember my daughter as a little girl and sigh at the memory of such an independent spirit so early on. I see, in the even staining and sanded edges, the handiwork of the sweet lady who spent her life rescuing and restoring antiques. And I remember those sacred holidays spent with my brother before he died in a land far away and our Christmases lost their “Merry.”

Memories are like that. Little moments that come and go with no great significance—until much later when you realize that they mean everything.

On several occasions throughout my adolescent education, I remember teachers asking us to write about our earliest childhood memories. Invariably, the vast majority of the class would write about the holidays, and more specifically, about Christmas. We would remember a certain toy we received, or something humorous a family member did, or a tradition that had taken root way back then. The significance of those writing experiences somehow escaped me until I became an adult. We don’t remember things; we remember the feelings attached to them. Our pencils may have been telling the printed tale of perfect gifts, but our hearts were writing in joy-infused cursive about the emotion wrapped within.

The truth is, there really is a magical quality about the holiday season. When you’re not grieving, that is. Whether you celebrate Christmas or another tradition during the dark month of December, there’s a spirit of hope and renewal that lifts its wings as the month presses on. It’s as though the memories scattered at your feet chase after you throughout the thirty-one days. Even when traditions change abruptly, the memories linger.

If you have recently said goodbye to your loved one, then you might be thinking at this point that I have spent just a touch too long, wistfully shaking snow globes. (And you might be right!) I admit, holidays have lost their luster, and sorrow has sucked the joy from my soul, too. Christmas just isn’t what it used to be, and it will never be what I had hoped.

Michael’s death shattered my world. Quite literally, the music just stopped. There was nothing joyous or spontaneous or beautiful anymore. The silence was beyond deafening. It was eerie and depressing. And suffocating. The only music I could hear was the haunting echo of Taps and the chilling squeal of the bagpipes that accompanied Michael’s burial.

My first holiday after Michael’s death was raw and painful. I couldn’t bear to listen to the carols or look at holiday advertising. I barely tolerated bell ringers at store entrances, and I wanted to scream at shoppers who sat out all night on Thanksgiving evening just so they could be the first to have a meaningless possession. Didn’t they know what was really important? Everything made me cry, and it hurt too much to even think about our childhood memories, let alone attempt to continue the traditions.

The next Christmas was different. Not easier. Just different. I cried a little less and smiled a little more. I braved the legendary Black Friday shopping day, but my heart wasn’t in it. I didn’t care if I bought anything or scored any bragging rights on landing an amazing deal. I could tolerate the Christmas carols, but I could only mouth the words. I couldn’t give voice to the meaning.

This will be our ninth Christmas without Michael, and I’ve noticed that the music has returned once again. It’s a different song, a lower pitch, a slower tempo. But I hear the music again. The tears sometimes still surprise me at the most unexpected times, but they’re more of joy than of sorrow. The memories flood my soul and have nowhere to go but down my cheeks.

A few years ago, I happened upon a slightly larger version of my childhood rocker. The same curved back, the same tapered runners, the same glossy sheen. The seat is in far better condition, and it would certainly support more weight, but there is no music box. Just a simple rocker. Not having the space for it in my home, and not having any logical use for it, I did what made sense to me at the time: I bought it. It’s currently sitting in my attic, beside the first one. No one outside of my family knows it’s there, but I do. And it makes my heart smile.

I don’t know if Michael ever even sat in that original rocker at all. But to me, it doesn’t matter. That little rocker reminds me of a time in my life when my brother was full of life. An infant, a toddler, a young boy, a man… a husband and father. Always a son. Always my brother. Always beside me.

And the larger rocker? I can’t really explain why I bought it. I simply don’t have a logical explanation. But I love it. And I love that it doesn’t have the music box that the original version does. It’s a good reminder that sometimes silence is just as important as any other melody. Sometimes the music really does stop… and that’s okay. We lose our rhythm, stop moving, and are just still. That’s a part of the healing. When we begin moving, begin to get back into our old/new self, the music will begin again. Eventually.

Depending on the pace of our new-found lives, the music will sound different. Slower or faster. Sweeter or with more bass. Louder or softer. A simple melody or four part harmony. A gentle lullaby or a frenzied techno number. Perhaps we’ll need earplugs to tolerate the sound we create…at least until we settle on the right rhythm and volume.

I bought that second rocker, not because I needed it but because it reminded me of Michael. Two rockers that tell a story. One with the melody of my youth, and one with the silence that grief drags in. Both will go by my tree this year, because they remind me of us as kids, side by side, still rocking on.