Making Memories Across the Ocean

“Remember the Love, Share the Heartache, Honour the Fallen However They Fell” ~ Bereaved Families Support Group 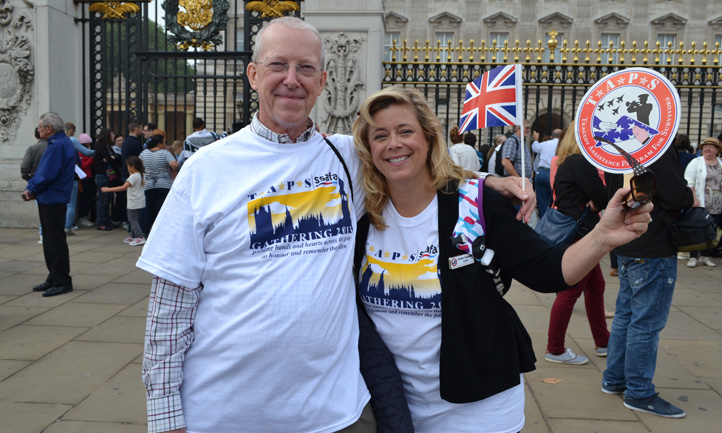 Joining hands and hearts across the globe to honor and remember the fallen was the essence of the first ever TAPS/BFSG gathering. The Bereaved Families Support Group (BFSG) is a program of Soldiers, Sailors, Airmen and Families’ Association (SSAFA), a United Kingdom nonprofit organization that has been supporting their military families since 1885. This year TAPS families were graciously invited to join BFSG for an annual national meeting held in Glasgow, Scotland. With great excitement, the American families traveled across the pond to represent TAPS in the United Kingdom.

As the TAPS families arrived, they were treated to a spectacular glimpse into London’s rich military history and culture by special ambassadors Roger and Maureen Bacon, bereaved British parents. They were among the many others who had the vision to bring our two groups together to remember the love, celebrate the life, and share the journey.

The group was then whisked away for their first adventure in the foreign land. They participated in a historic walking tour around Buckingham Palace followed by a visit to Westminster Abbey.

Roger, with his passion for military history, shared how the British honor their fallen. One significant and honorable way the English remember their fallen is to travel to memorial areas around the country and place a wooden cross with their loved one’s name and picture on it.

“As we stand here at Westminster Abbey today,” said Roger, “imagine how on Remembrance Day there will be hundreds of wooden crosses stretched as far as you can see, honoring our fallen soldiers.” Many reflected on what a sight that would be to see in November. Silence and respect were the watchwords that day as the families were personally invited to have a cross placed on Remembrance Day this year, a touching tribute for the American participants. Remembrance Day, also known as Poppy Day or Armistice Day, is observed in the United Kingdom on November 11 each year.

The group was in for another special treat as Lord Dannatt, a good friend of the Bacons and Constable of the Tower of London, arranged a private tour of the Tower of London to include Queen Mary’s house. The Yeoman Warder tour guide was especially interesting, as he regaled the group with chilling stories about the Tower’s 1,000 year history.

A precious and solemn moment took place during the visit to St. Paul's Cathedral, where the group viewed the American memorial nestled in the back of the beautiful cathedral. The group was particularly touched by the special welcome to TAPS families during evening song.

After a long day of touring key areas in London, the TAPS tourists joined together for a meal at a traditional pub to rest, relax, and reminisce about the day’s events.

In addition to the London tour, the families toured Windsor Castle, where they watched the changing of the guard. The families enjoyed a meal that included superb British entertainment and thanked Roger and Maureen for their wonderful hospitality.

With bubbling anticipation on their train ride north, the families arrived at the Glasgow, Scotland rail station in advance of BFSG’s national meeting. Many shared how inspired they were to meet, comfort, and share their loved ones with fellow United Kingdom bereaved families. The grand welcome at dinner laid a foundation for memorable moments to come as the families gathered.

TAPS survivors did not hesitate to reach out and share the heartache and—more importantly—the wonderful memories of their loved ones. The buzz filled the room as instant connections were made. The true joy of memories and experiences were shared as parents from both sides recognized the horrific losses worldwide.

One of the highlights of the weekend occurred when Bonnie Carroll, president and founder of TAPS, was given the honor of laying the wreath at the war memorial in Victoria Park. Participants laid roses with pictures of their loved ones alongside the wreath. 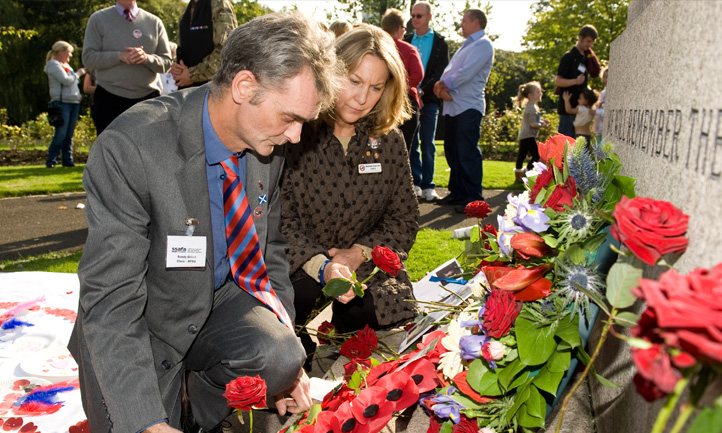 “We are all going through the same loss together as bereaved families; many of our loved ones even served alongside each other,” said Carroll. Tears were shed, hugs of comfort were given, and lifelong friendships were formed. As the meeting came to an end, families exchanged contact information and promised to adopt each other’s loved ones. Many shared that they would count it a privilege to honor and cherish the fallen regardless of the distance apart.

During the closing ceremony, the families reflected on the common thread that allowed them to participate in the joint TAPS/ BFSG Gathering 2013.

Andy Weiss, surviving father of 1LT Daniel Weiss.
From the incredible day hosted by Roger and Maureen Bacon to the seamless inclusion by our new old friends at the BFSG meetings in Glasgow, Julianne and I learned that grief knows no boundaries and our mutual love and respect knows no limits.

Helena Tym, surviving mother of Rifleman Cyrus Thatcher
The over-riding feeling that we got when we came over to Washington for the TAPS National Military Survivor Seminar was the warmth of the welcome and how we were embraced by TAPS. I hope that the TAPS families who came to Glasgow felt the same. Within the folds of TAPS and BSFG, there is a feeling of safety and comfort—rather like putting on a favorite pair of slippers. I know we now have those we can call on who live many miles away but will always have time to listen and care.

Marilyn Collins, surviving mother of SGT James Collins, Jr.
My experience at the Glasgow/London event was all about connections. Some with people I am sure I will see again at TAPS events. Some with people I will never meet again but will never forget. And, of course, it was another connection with my son. Another way of remembering and honoring his life. An experience my husband and I will cherish for the rest of our lives.