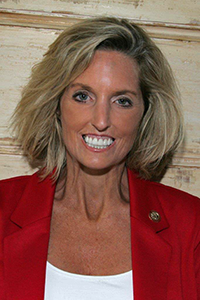 As fall approaches, I am filled with a mix of emotions as I’m flooded with memories of the past and passion for my newfound purpose. October is the month when I married my best friend and soul mate, John Ruocco. He was the life of the party and loved any excuse to be with friends and family to celebrate. Halloween was his favorite holiday, giving him an excuse to dress up and act like a kid. He found joy in everything autumnal—the smell of wet leaves, the brilliant colors on the trees of New England, and of course, football. Even his birthday occurred in the fall. I always looked forward to fall because we would get away on our anniversary, just the two of us; it was “our time.”

When my husband took his life on Superbowl Sunday 2005, everything changed. I felt alone, confused, and isolated. I didn't know anyone who had experienced this kind of loss. I was ashamed and angry and exhausted, too devastated even to look for help. I would look at my boys, Joey (age 10) and Billy (age 8), and see their pain. But I couldn't take it away. I felt helpless.

I especially dreaded the fall. How would I make it through our anniversary weekend? Halloween was going to be torture. My two little boys would want to go Trick or Treating. I didn’t want to take anything else away from them, but how would I do it? My family and friends meant well, but they didn’t get it. They thought it would help me to get dressed up and see my kids having fun. I realized then that I needed to talk to others who had navigated this journey and could offer me guidance. They had to be out there; I just didn’t know where.

I remember the night I found the pamphlet. I was sitting on my bedroom floor at 2:30 a.m. sorting through my mound of papers and crying. Tucked in the pile was a brochure from TAPS. I read it carefully and wondered if this could really include me. I hadn't felt welcome in so many of the support systems for military survivors. I also didn't feel like civilian suicide support understood my husband’s journey, his commitment to serving his country, his sacrifice, and his injuries.

TAPS carried me through those first years by offering a multitude of support, not only with my complicated grief but with other issues, such as benefits. My journey started slowly, reaching out to others, supporting one another, and sharing strategies for coping. I learned it was okay to tell my kids that I wasn’t up for Halloween, but their aunt was. I learned to accept help. I learned that people who wanted to help were grateful when I gave them something specific. But the most important lesson was that finding meaning and purpose in my husband’s death is incredibly healing.

A lot has changed since 2005. There is more awareness and a little less stigma. TAPS now has an internationally recognized postvention program for survivors of suicide loss. We have Memorandums of Agreement with branches of the Armed Forces that allow us to offer support immediately.

This fall, Joey will leave for college, instead of preparing for Trick or Treating. Billy will look forward to his TAPS mentor attending one of his games. September is Suicide Prevention Month, so I will travel around the country talking to service members, providers, and the media. I will request that they all remember Marine Major John Ruocco for how he lived and served, and not just for how he died.

This fall, TAPS will hold the 5th annual National Suicide Survivor Seminar. I want survivors of suicide loss to know you are not alone. Join us in Colorado; you can get through this and we are going to do it together.