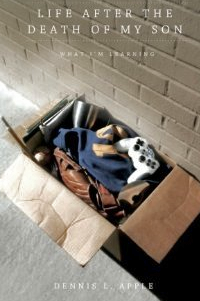 Beginning right after the sudden death(from mononucleosis) of his 18-year-old son, Dennis Apple began journaling his soul-searing questions, his frustrations with friends and family, his anger and disappointment with God, and his emotional and spiritual battles. Each time he filled one journal he would add it to the stack in the storage closet. From these journals, Dennis chose the top ten lessons he had learned in his journey of grief and wrote Life After the Death of My Son: What I'm Learning.

These lessons became chapters: Will it always hurt this much? Will our marriage survive this? Am I losing my mind? Where is God? I don’t want him to be forgotten. His birthday is coming. I love my church—but sometimes it hurts to be there. I didn’t cry this morning. I’m beginning to live again. A wounded healer?

As you can see from the chapter titles, the book touches on the human connections and the challenges that result from the death of a child. In addition, Dennis delves into his strained connection with God following the death. This was very comforting to me, because Dennis had the same struggles in that area that I was having, despite the fact that he was a protestant minister.

Life After the Death of My Son is refreshingly honest and presents an unvarnished account of Dennis’s grief journey, while offering hope, validation, and connection. He has a way of writing that is engaging and truthful. His vulnerability is palpable. Dennis’s transparency as he reveals his anger with God and the questions he had regarding his faith are comforting just because of the way he exposes his personal internal battles.

Those who have walked the grief journey and felt that their faith was shattered know that the questions outnumber the answers. And the answers are not the same for everyone. The book offers a Christian perspective, but not in a way that would deter those of other faiths.

Parents, in particular, will identify with many of the thoughts Dennis shares, but I certainly would recommend this book to anyone who is struggling with their faith after the death of someone close. Many will have their own struggles validated as they relate to the shared processing of sorrow and questioning of faith. In addition to having aspects of their own emotional and spiritual journeys validated, I believe readers will find comfort in realizing that they are not the lone traveler on this path. Grief counselors, extended family of the bereaved, or anyone who wants to—or should—understand the pain after the loss of a child would also benefit.