This year, I am running the Marine Corps Marathon as a member of Team “Doc” Almazan. While I never met Army Sergeant David Almazan, a combat medic killed in Iraq in 2006, I’ve run several races in memory of him and in support of his surviving wife, Salina Jimenez, whom I met during the 2010 Marine Corps Marathon. 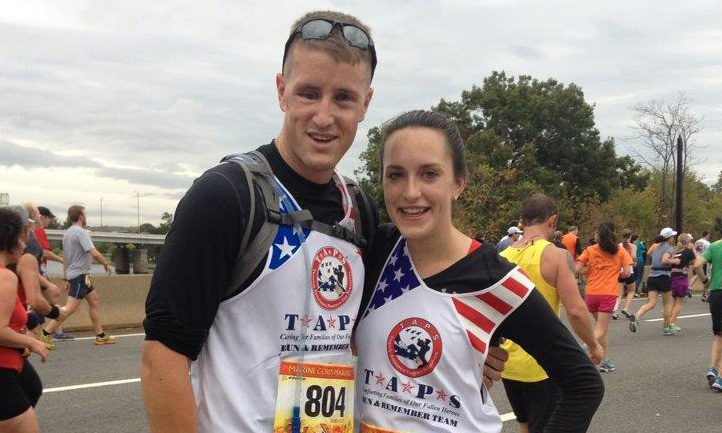 My running mate is Staff Sergeant Jeremy Boutwell, who medically retired from the Marine Corps in July. Despite his injuries, Boutwell has committed to pounding pavement for 26.2 miles. In addition to running for Almazan, Boutwell is also running in memory of several friends he lost during his deployments to Iraq, including Pfc. Ricky Morris, Pfc. Brandon Smith, and Lance Cpl. Nicholas Perez.

On Sunday, Boutwell and I will participate in the inaugural Navy-Air Force Half Marathon in Washington, DC, as part of our training. I’ll be wearing my TAPS singlet with Almazan’s photograph on the back.

Last weekend Jeremy flew in from Texas and after a well-balanced meal of spaghetti, Oreos, and Gatorade Saturday night, we felt ready to run 13.1 miles. Before crossing the start line, we had a chance to mingle with other TAPS Run and Remember teammates. After the race, Jeremy said, “We really couldn’t have asked for a better day to run that race.”

We still have a lot of training to do, including an 18-mile training run this weekend. It will be the longest either of us has run during our preparation for the marathon and, of course, we won’t be able to pump each other up with words of encouragement as the trail gets tough.

But we couldn’t be more confident that we’ll both be ready for Marine Corps Marathon after last weekend’s race. We were able to validate a pace and pin down how long we’ll spend at each water stop. And while Jeremy is nervous for how his body will respond to running 26.2 miles, we’ll both be ready to take it one mile at a time.

“I’m not running for me,” Jeremy said. “I’m running it for Marines who are no longer with us. I’m going to do anything I absolutely have to do, up to and including crawling my way across that finish line.”

Marine Corps Marathon is exactly one month away. With just a few weeks left to embrace the blisters, multi-hour training runs and insatiable cravings for carbohydrates that accompany marathon prep, we have encountered a number of challenges. Last weekend Jeremy and I both missed one of the longest training runs on our schedule. I got hit with a sinus infection that kept me in bed for a couple of days and Jeremy wrestled with a fever and increased pain in his lower back following a cortisone shot that was intended to relieve the pain.

Catching a cold during marathon prep is one of the most frustrating parts of training. Most runners I know get sick mid-season due to a change in seasons and overall exhaustion. We were no exceptions. But we’re both back on our feet and planning to clock some serious mileage this weekend.

We realized how much easier long training runs can be when we run together. “Doing the long runs is no fun without a partner,” Jeremy said. I suppose the easy solution would be to grab a friend to run with, but the problem isn’t finding someone who can run long distances; it’s finding someone who actually wants to run 18 miles.

Carrying a sustainable water supply can be a pain. There’s no shortage of funky water bottles, waist bands, and hydration packs available on the market, but when you’re running long distances the gear can often rub the wrong way. That’s a perk of doing an organized race during training season—the guarantee of having a water stop to replenish every two or three miles.

The marathon is now just around the corner. With less than three weeks until the race, we each completed a solid and steady 19-mile run over the weekend. We both finished in about three hours, causing us to slash our goal in the actual marathon by 45 minutes, from 5 hours down to 4 hours, 15 minutes.

All things considered, we’re each feeling strong. Not too sore, just a little more hungry than usual from all the calories we’ve been burning. Jeremy said he “felt like a million bucks” and experienced little to no pain during or after his run. I’d say I felt more like a quarter of a million bucks. I think we’re both doing surprisingly well. As Jeremy pointed out, the anticipation of a 19-mile run was worse than actually running it.

We’ve found some new ways to keep each other motivated and even exchanged surprise training gifts. Jeremy sent me a pink CamelBak as a response to one of my previous posts about how I haven’t found a hydration pack that I like. It’s lightweight, rides high on my back, and fits perfectly.

I sent Jeremy a pair of neon yellow laces. One of the first times we spoke he mentioned that he’s generally restricted to one type of sneaker (which usually only comes in grey). Jeremy has to have a cobbler build up one of his shoes exactly one inch in order to compensate for a shorter left leg from his combat injury. I thought the yellow laces would spice up his sneakers…I’m not so sure he’s as thrilled with my gift as I was with his.

We’ve also been in touch with Salina, Doc’s widow. She told us, “When someone on the route shouts out a ‘Hooah,’ it’s worth the training, the mileage, and the drive to live for our fallen hero.”

Staying motivated in these final weeks can be tough, but encouragement and communication with teammates around the country seems to be getting the job done.

Eighteen weeks of training and 26.2 miles later, we made it to the finish line of the 37th Marine Corps Marathon. Despite incoming Hurricane Sandy, we ran alongside some 30,000 runners from every state and 54 countries. The turnout was the largest participation in the event’s 37-year history.

Jeremy and I finished the race in 4 hours and 25 minutes. We ran a little slower than we anticipated (due in part to a few too many pit stops and windy weather) but still crossed the finish line well under our original goal of five hours.

For those last five miles, rather than thinking about crossing the finish line, our strategy became focused on making it to the next water station. Two miles from the finish, the idea of completing the race started to feel real. We could hear the crowds cheering at the Iwo Jima Memorial, and the words of a passing runner helped us regain our momentum and pick up some speed after we stopped to walk.

“Doc would be proud,” the runner said.

When we crossed the finish line, as Marines and thousands of spectators cheered, we couldn’t have felt better. It was an emotional moment and I felt humbled and proud to be a part of it.