A Brother’s Loss During War

I am a man. I am a brother. I am a combat veteran. And I am a sibling survivor. Nowadays, there are not that many of us who have survived going to war and, at the same time, lost a family member to that same war. In the 1940s there were more of us. A visit to the Arizona Memorial at Pearl Harbor will give you a great example of the magnitude of this reality in just a single event. More than 30 sets of siblings were lost on that one ship alone on that day. What we find in today's wars is nothing near that. 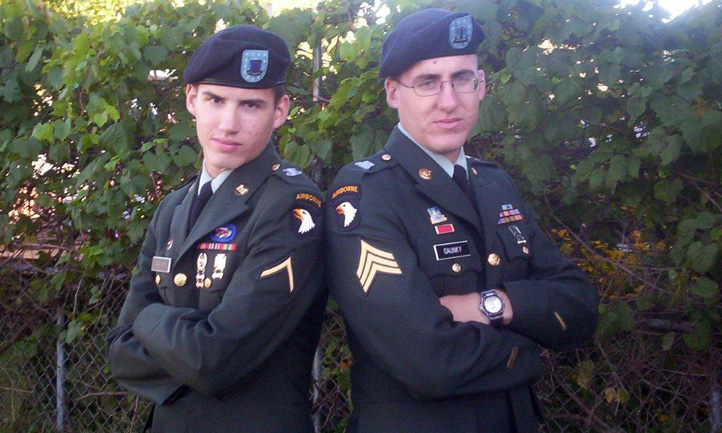 Not long before my second deployment, after my youngest brother Alex had finished his leave and gone back to his unit for last minute preparations for deployment to Iraq, I made my mother a promise. Like the stereotypical movie scene in which the more experienced soldier promises the soldier's mother that he will bring her son home, I told my mom that I would keep an eye on Alex and make sure he got home safely. It sounds so cliché to say that, but it’s true. I said that. And when I didn't bring Alex home the way we had all hoped, the guilt that came with being the soldier who lost a comrade and the brother who lost a sibling seemed almost impossible to describe, even to my own family.

It was November, 2005. My parents were in the middle of a second round of deployments for their sons. Alex was on his first deployment. My older brother Dave and I were on our second. The previous fall my parents had displayed a Blue Star Service Flag with four stars emblazoned upon it. Now they were enjoying the luxury of having only three blue stars and, thankfully, no gold. That reality would not last.

It was a Thursday morning, and I was getting off a twelve-hour shift on a Forward Operating Base on the west side of Baghdad. Dave was on a ship nearing port in the United Arab Emirates. Alex was 140 miles northwest of me in a city called Bayji. His team volunteered to go out to support another element in their company that was taking fire. But a civilian vehicle crossed the highway median and hit Alex’s vehicle. It rolled and Alex was severely injured, transported to Germany that day.

Twelve hours later, I saw a report and emailed Alex, asking him to let me know he was okay. A response from him never came. Instead I got an email from my dad, confirming that Alex was in bad shape. Before the end of the next day, I arrived in Germany, only to find out that Alex had not survived his injuries.

The following Wednesday I escorted my little brother's remains home. From the Mortuary Affairs office at Landstuhl Army Medical Center to Frankfurt Airport to Cincinnati to Milwaukee and then home, I only left his side for a few hours. During that period, I was caught and trapped in a dual role. A difficult role. I was not only the sibling of the fallen soldier; I was a representative of the military to the family of the fallen.

By the time the escort mission was complete, it was Thanksgiving Day. Dave arrived home from the United Arab Emirates in time for the wake and funeral. But within a few weeks, we were back with our respective units and back in the war. The nearly immediate return required us to put off that most important part of loss for those who are the family of the deceased. We put off, like any other service member, the mourning that we would one day have to deal with. For ten more months I remained in Iraq. Even then, after returning from war, it was hard for me to take the time to grieve.

In my experience, the mentality of men in general and the military in particular is to "suck it up and drive on." Mission and taking care of troops takes priority. Taking care of oneself is secondary. That mentality stuck with me far longer than it probably should have. It was easy to feel isolated. The military didn't really want to talk to me about my brother’s death. And many in the survivor community didn't want to hear about my time of service.

This difficulty in connecting completely with people from either group was frustrating. I had to find my own way to survive the hard times: the holiday seasons, the birthdays that would never be, the thoughts of potential family I might have gained, the anniversary of the loss. All of this has taken me a long time to be able to handle.

To deal with these issues, I have found several things that helped. I have worked to reestablish family connections. I also worked with counselors (one at an Army hospital during service and two at the VA since leaving the military). They have helped me deal not only with my grief and guilt over my brother’s death, but also on other issues due to my military service. About a year after that second deployment, I found TAPS and made some connections that have helped me. Beyond that, I have tried to retain relationships with those with whom I have served, and I still try to bridge the two distinct roles of my life: combat veteran and grieving brother.

Even in the solitude in which I have found myself—not being able to really relate to many people—I have strived to help carry the burdens of those who cannot speak of their own loneliness and sorrow. I have used my experience to help and give to others. I work to help other veterans in my area deal with their issues, and I work to support those who have suffered traumatic or sudden losses.

I also try to bridge the gap between those of us who have fought or have lost a loved one, with those who don't yet understand our loss and grief. In some way, that seems to be the only thing that I can do that in any way makes up for the grief and the guilt that I have experienced. I know that sometimes when we are dealing with our grief and loss, the situation may seem insurmountable, but it is not. I am living proof of that. And I know that all of us can start our own individual journeys on the road to healing as well.