Love, Loss, Grief, Healing, and Everything in Between

My husband once told me that despite the challenges life, law school, and the future might bring, all that mattered at the end of the day was that we had each other. He told me he would love me through the best of the best times and the worst of the worst. He was standing at a pay phone in Iraq when he uttered these words. Just a few months later, the worst of the worst times would begin for us. Well, not for us, but rather for me. 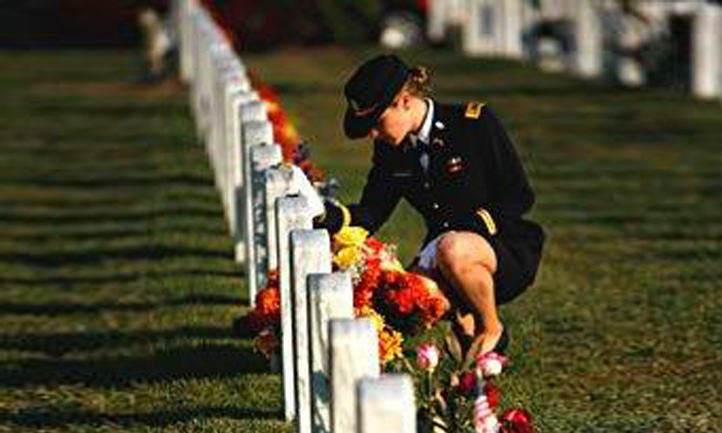 Jon and I met when I was a freshman and he was a senior at The Johns Hopkins University. At eighteen years old, I was a dedicated academic and allergic to exercise. I was not even a U.S. citizen, having moved from Scotland to Massachusetts when I was ten years old. Despite these handicaps, I loved military history and decided to join the Army ROTC program. I'd seen all the "Army of One" commercials where female Soldiers jump out of airplanes and blast through targets with M16 rifles. I knew it would be a challenge, but I was anxious to see if I could master this new and unfamiliar set of skills.

Jon was the Cadet Battalion Commander when I showed up at the ROTC building in my little white shorts and silver hoop earrings (I was yet to undergo my transformation from "girly girl" to "tough warrior"). After months of learning by some trial and lots of error, I began to understand what I had signed up for. Better yet, I came to know the man I would later agree to marry.

By the time Jon dropped to his knee and asked me to be his wife, I had been dreaming about those magical words for two years. A year later, I graduated and was commissioned in the U.S. Army. It was Jon who administered the officer's oath to me on May 24, 2006. Just weeks later we were married. Our wedding was like a scene out of a bridal magazine, and our whirlwind honeymoon was nothing short of heavenly. When we returned home, however, we had only five weeks together before Jon deployed to Iraq.

While I embarked on my new life as a law school student to pursue my goal of becoming a military attorney, Jon became a minor celebrity in his unit overseas. He performed logistical feats like delivering sixty boxes of hot pizza to Soldiers at nine different outlying landing zones and producing cold Diet Coke for the caffeine addicts.

There was no way to know what was about to happen when I got the knock at the door on April 7, 2007. The weeks following the news of Jon's death were a blur of disbelief. I ate nothing for two straight weeks and became gaunt and listless. The world continued to turn, yet I was paralyzed, rooted to the spot.

How could everything I loved be gone in an instant after taking years to blossom into the beauty of our life together?  I stumbled through the process of picking up the pieces of my broken life, unable to fathom Jon's palpable absence. For months, I found myself writing everything down-every precious detail, every precious memory. I feared forgetting what had made Jon who he was.

A month after I buried my husband at Arlington National Cemetery, I decided to withdraw from law school to become an active duty officer at Fort Bragg, where Jon had last been stationed. Many were concerned that I was making a hasty decision for the wrong reasons, but I knew that it would give me something to focus on other than myself. I spent a year in training before deploying to pick up where Jon left off, in Iraq. As an Army officer I wanted to do my part in contributing to the war effort overseas; as a widow I wanted to see for myself the place that my husband had spent his final days. Iraq did not give me all the answers, but it did allow me to recognize the potential I still had to do some good in this world, just as Jon would have wanted.

The bomb that ended my husband's life had come very close to shattering and completely destroying mine. Nothing seemed to lift the emotional weight that crushed my spirit when I contemplated living ten, twenty, perhaps even seventy more years without the one person I always said I couldn't live without. It took me four long years, but I finally figured out that some of the decisions I was making-or not making-were actually hurting rather than helping me to process the reality of Jon's death. So I made three new decisions. One was to avoid new relationships until I felt better. The second was to start a blog, through which I have worked out many issues. The third was to return to law school to finish the degree Jon always encouraged me to pursue.

I am now over half way to my goal of joining the JAG Corps and serving the Soldiers who serve our great nation. As I look back on the six years since my husband's death, I recognize that although my journey through love, loss, grief, and healing has been fraught with emotional heartbreak, it has also included some remarkable achievements and moments of pure joy.

I had absolutely no idea what to do when those two notification officers showed up at my door. Nor did I have any idea what to do when they handed me a check for several hundred thousand dollars-a check that represented my husband's way of making sure that I'd be taken care of if our worst nightmare should become a reality. I hate to use the term blood money, but it often felt that way. I never felt right about using that money for anything that didn't have some greater meaning-that is, until now. Last fall, I experienced one of those quintessential moments of pure joy when I made the decision to use half of Jon's insurance money to create an endowment and fund the Captain Jonathan D. Grassbaugh Veterans Project.

When I thought about how I might turn a nightmarish situation into something good for others, this was it. The project will help veterans facing myriad issues-financial crises, landlord-tenant disputes, foreclosures, and other problems-that require an attorney's help to reach a solution expeditiously. Beginning this fall Ohio State law students, under the supervision of a qualified lawyer, will work with these clients who have served our country. This work and this project mean more to me than any material thing that money could ever buy. This is my husband's legacy, and it's one that will go on long after I'm gone, too. It means that my other very worst fear will not come true-that in time, Jon will be forgotten.

When I graduate from law school next year, my dream of becoming an Army JAG officer will finally come to fruition. I wish Jon could be there to see me walk across the stage and receive that long-awaited degree. More than anything, I wish he could be there by my side while I experience the joys of professional success in an organization I already love.

I don't know exactly what else the years ahead will hold for me. But no matter what I may do in the future, I will continue to take flowers to Arlington and ask Jon to give me the strength to find my way as I continue to trudge clumsily forward. I will continue to reach out to others who find themselves in this impossible situation and to lean heavily on friends and family. Above all else, I will continue to love Jon, my beloved husband and best friend, just as he told me on the eve of our wedding, "always and forever, and nothing will change that-ever."