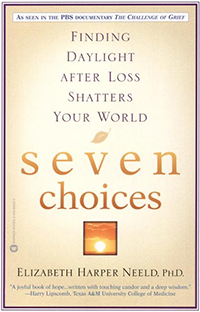 Early in my grief journey, I looked desperately for books or manuals or instructions-anything to help me get through each day-but bookstores didn't stock very many books about grief. I found this perplexing since death is universal and most of us will experience the loss of a loved one at some point before we ourselves die. For TAPS survivors, that loss seems to occur sooner rather than later, because many of our loved ones die in their teens, twenties, and thirties.

Seven Choices: Finding daylight after loss shatters your world by Elizabeth Harper Neeld was one of the few books I did find. I surprised myself by buying and actually reading a book with the word "choices" in the title. And not just one or two choices. Seven of them. It seemed to me at the time that there were no choices in grief. I felt as if I were caught up in a tornado and that there was nothing I could do other than to go along with it wherever it went.

Elizabeth Neeld quickly drew me in. She is an engaging writer whose husband died suddenly when he was taking a six mile run one evening. Even though I had lost a child to war, I felt somehow connected to an author who had experienced the grief of an immensely important person in her life.

In Seven Choices, Neeld describes seven major points on the map of the grief process. 1) Impact: Experiencing the Unthinkable, 2) Second Crisis: Stumbling in the Dark, 3) Observation: Linking Past to Present, 4) The Turn: Turning into the Wind, 5) Reconstruction: Picking Up the Pieces, 6) Working Through: Finding Solid Ground, and 7) Integration: Daylight.

Each chapter begins with an account of Neeld's own experience. She then describes characteristics of that point in grief, using the examples of sixty other grievers who were willing to discuss their grieving processes with her. Parents, children, siblings, spouses, and friends illustrate different aspects of the grief journey. Each chapter then includes a section that explains Critical Considerations during that time frame followed by sections subtitled The Choice and What We Need from Family and Friends.

Seven Choices is a book that is relevant for years after the death of a loved one. It is not necessary to read the entire book at once. In fact, I found it helpful to simply read new sections when I felt ready to do so. I have also found that it is useful to go back and re-read some sections, since the grief journey feels somewhat cyclical to me. By that I mean that we pass certain points in the journey more than once, but hopefully from a different perspective as we journey: more like a spiral that passes certain points on its upward course.

Additional resources for all who are grieving can be found at the end of the book. There is a section titled Helping Children and Teenagers Deal with Loss, as well as a Directory of Resources that includes TAPS, and Chapter Notes for those who want more information.

Betsy Beard served as the editor of TAPS Magazine for seven years in addition to volunteering as a peer mentor, care group facilitator, and national workshop presenter. She currently serves as the vice president of Military Writers Society of America and edits their annual anthology. In addition to contributing many articles for TAPS Magazine, Betsy has been published in Living with Loss and various newspapers. She wrote the award-winning children's book, Klinger: A Story of Honor and Hope, which earned three gold medals and a silver medal. She lives in North Carolina with her husband, Randy.