My Journey of Grief

I have always thought of myself as a strong person. In reality my strength had never really been tested until I experienced the losses of the last 13 years. I lost my dad in 2000, a half sister in 2004, another half sister in 2008, my mom in 2010, and my son in 2012. I have to say that I had handled all of my losses up to my son's pretty well. I was sad and did my share of crying, but things had gotten easier. When my 22 year old son, Specialist Jason Edens, was wounded in Afghanistan and then died 11 days later on April 26th, grief took on a whole new meaning. 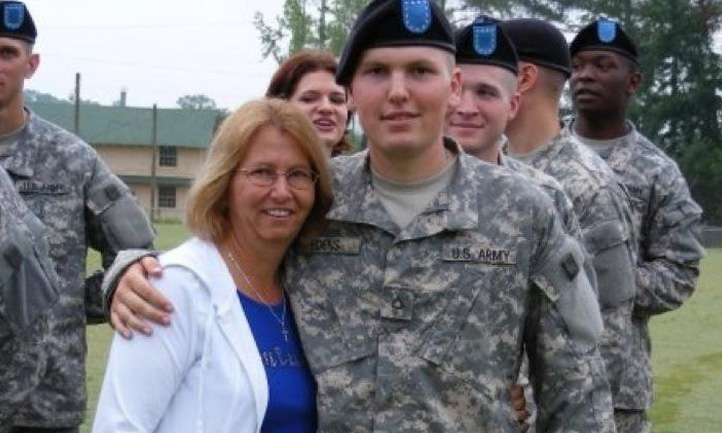 After Jason's funeral, I returned home to Alabama and took another couple of weeks off before returning to work. Every time I was alone I just couldn't stop thinking about my son and my pain. I kept replaying every moment with him over and over in my mind. I would go and look at baby pictures, even organizing them all into chronological order, and would just flood them with tears while I was doing it. I thought this could not be healthy for anyone.

So I picked myself up and I headed back to work, because honestly I just didn't know what else to do. I love my job or that probably would not have been an option. I had been gone for five weeks and my coworkers had kept everything caught up for me, so I was able to ease back in. It was a really busy time of year so I managed to keep my mind occupied all day. The nights were the hard times. I would come home and the thinking and crying would start again. I was desperate to find help.

One of the first things I did was get on the computer and look up Gold Star Mom groups. I contacted one in Georgia and they invited me to come, so I drove the 2 ½ hours to meet with them. I met some wonderful ladies there but found out that the Gold Star Mothers are not really a grief support group. They are more about raising awareness for veterans and doing things to help educate people about military issues. I left there feeling worse, although I did make a very good friend that I am still in contact with.

I wanted someone to "fix" me and my pain. I was just so anxious and so sad. I contacted the Fort Benning Survivor Outreach Services (SOS) office and, after several tries, finally went there to talk to someone. The coordinator gave me the number for a counselor that they have on staff, and I called to set up an appointment. When I met with her it was okay, but she had never lost a child so I just didn't see how she could understand.

My next thought was that I should try a regular paid therapist and I went through my health insurance to set up an appointment for counseling. I went several times, but again I realized that they did not have a clue what I am going through. Still desperate for help, I just didn't know what to do.

I bought and read books and found articles on the internet. Someone at my church told me about hospice, so I contacted them and went to some group meetings for a while, but again it seemed like they could only get me so far.

Since I was still searching, the hospice workers told me about The Compassionate Friends and I thought maybe I was getting closer to a good fit for support since these were all parents who had lost children. I attended a few of their sessions before deciding that losing a child serving in the military is a whole different experience.

By this time I had been through several instances of depression and several anxiety attacks. I think the real turning point finally came when I attended the Gold Star Mother's Day luncheon at Fort Benning in September. It was at this meeting that I met other newly bereaved mothers who were still grieving and searching for each other.

From their recommendations, I connected with several online groups. I know it sounds crazy but I found comfort, acceptance, and understanding with these groups, although I had never met the members. It was also through these groups that I learned about TAPS. I had been given a TAPS brochure way back at the beginning, but it had been filed away with all the other papers people were giving me at the time. As you probably know, we are barely aware that we are even alive at that point in time.

I attended my first TAPS event in February, and I must say it has been the best thing that I have done in all these months of my new "normal" life. It was at this TAPS Parents Retreat that I found others who totally understood my grief. I really don't even know how to put into words the value of this retreat. As a parent who lost her son less than a year previously, I had been searching for a beacon of hope, some sign that someday I would be able to enjoy life once again.

Spending time at the retreat with all of the other parents was a life changing experience for both me and my husband. We are miles further in our grief process now than we were before the retreat. My husband, as a step-parent, saw others grieving and now understands the huge amount of grief that I am feeling. We all came into this retreat as strangers and parted with lifelong friends. It was so nice to be able to talk about my son and not make someone uncomfortable. The retreat was a place of hope, sharing, safety, and healing. My only regret is that I had to leave and return to the real world.

How have I survived this first year? I did it by searching out help and not giving up until I found it. I did it by carrying on my everyday life as much as possible and trying to give it my best shot. I did it by continuing to challenge myself physically. I am a runner so I made myself join a running group that meets on Saturday mornings. And last, but certainly not least, my belief in God has helped me through my pain. The hope that one day I will be reunited with all of my lost family members keeps me going each and every day.

Am I okay? No, I will never be okay. I still cry several times a day. But I refuse to let my grief define who I am. Do I sometimes feel guilty about carrying on with my life and trying to enjoy it? Sure, but I am still on this earth, so I must make the best of it. It is what my son would want me to do. I will choose to make the most of the time I have left on earth and try to live every moment as if it were my last. And I will continue to fight to live in this new "normal" and make my son proud of me.