TAPS provides support for anyone affected by the death of a service member, and that includes the battle buddies who trained and served with our loved ones. Not only are these service members TAPS survivors themselves, but many of them become runners and fundraisers on the Run and Remember Team as well. Sometimes they meet the family of their close friend who died. Often they are able to share stories of the one who died. Always they wear the names and faces of their friends on the back of their TAPS running singlet. 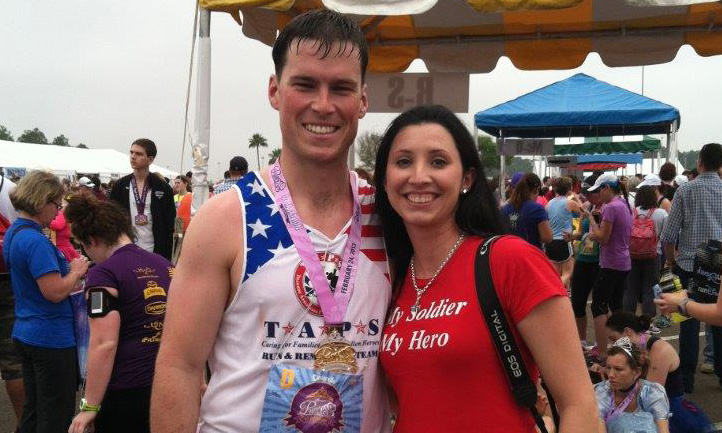 Coming from all the branches of service, these special runners count it a privilege and an honor to remember their fallen. Running in memory of a battle buddy can provide an outlet for healing for those who have taken the oath. It also helps them in their commitment to staying in top physical shape when they are still active duty.

Army Staff Sergeant Chris N. first heard about TAPS when his fallen teammate's widow attended a TAPS retreat. "My team did research into the charity while we were still in Afghanistan, and immediately we were interested in TAPS and the impact it had on our community."

After returning home, Chris ran the Disney Princess Half Marathon for TAPS. "Running helped me in my process of grief," said Chris. "I lost several friends in Afghanistan last year, and they are all heroes to those of us who made it through the deployment. If I could talk to them now, I think they would all agree that their loved ones needed all the help they could get-and that TAPS is a great organization that does just that. I take comfort in that."

With 17 years of military service, Navy Senior Chief Gina Colagiovanni runs in memory of her friend Navy Petty Officer First Class Steven Daugherty. Gina met Steve in the fall of 2000 when both were stationed in Pensacola, Florida. She told us, "He was one of those genuinely good people you were fortunate to have as a friend throughout the course of a military career."

Gina first heard about TAPS from a fellow service member. One look at the website and she knew she wanted to be part of the team. Seven races later (two marathons, four half marathons, and one 10K), Gina said, "The friendships that I have made and the memories that have been shared through my experience with the Run and Remember Team are among the most precious to me. The lives of these heroes live on in the hearts and minds of their family and friends, and out there on that race course, it's all about them and sharing their stories. I've been honored and humbled to be a part of it."

Marine Corps Major Ben Ringvelski has completed 18 years of active service. After multiple tours in Afghanistan, Iraq, Africa, and Kosovo, Ben is currently assigned to the Joint Staff. He was introduced to TAPS after his best friend, Captain Justin Peterson, died in Iraq in Oct 2006. He learned through Justin's wife of the support and healing that TAPS provides and was introduced to TAPS Run and Remember Team Director Marie Campbell after he finished the 2008 Marine Corps Marathon. His next race, the 2009 Marine Corps Historic Half Marathon, was as a TAPS team member.

To date, Ben has run 14 marathons and half marathons in honor of fallen warriors and their families. "There are 12 battle buddies, classmates, and friends on my TAPS singlet," he said. "The fallen I carry on my back are always a source of inspiration and motivation. Running in memory of my fallen friends definitely provides an outlet for both my personal healing as well as the healing of the family and friends of the fallen."

Often when people see a TAPS singlet, they ask about it. At that point, according to Ben, the service member's story begins to be told and their memory lives on. "It's often in the starting corrals, along the race route, or in post race areas that folks thank me for my service and running for the fallen; they want to know more about the names and faces on the back of the singlet."

Army Master Sergeant Norma Dealcala has been in the Army for 23 years and is currently stationed at Fort Hood, Texas. After returning from her second deployment, running became Norma's new obsession. In 2010, she started running with the TAPS team.

"Becoming a member of the Run and Remember Team is the reason I now love to run," said Norma. "I know deep in my heart I am giving back something to the family-keeping their hero's memory alive and celebrating their lives. I want the families to know their loved will never be forgotten."

Norma has now run more than 20 races. "Every race as I remember why I am running, I cry, I smile, I laugh, and I am so thankful for this opportunity. I think of my Soldiers and how I want to keep their memory alive."

"I believe running has helped with my healing," she added. "I was devastated. I felt so much guilt, I was angry, and I was in denial. Then I thought about their families and how the news was going to affect them."

When asked what he would say to another service member considering running for TAPS, Ben said, "Absolutely, do it!  I've had the pleasure of becoming friends with many fellow service members and survivors across the country. Our common cause binds us together in our individual grieving, while providing an opportunity for fellowship and friendship."

Norma also credits the TAPS Run and Remember Team with providing a way for her to connect with others.

Chris agreed and revealed a tip on fundraising as well. "To those thinking about running: do it! I don't think committing to run was difficult; it was the fundraising. I got creative and promised everyone that I would run the half marathon in a tutu if they helped me reach my fundraising goal. I easily surpassed my goal after that announcement!"

Gina summed it up by advising us, "I would tell them that all things are possible when inspired by the memory of heroes. With every step, another family member left behind is taken in by the TAPS family. It's a service that costs us so little for those who have sacrificed so much… and TAPS brings better days."