Tech. Sgt. Ryan A. Balmer died June 5, 2007, in Kirkuk, Iraq. He was assigned as Special Agent to the Air Force Office of Special Investigations. 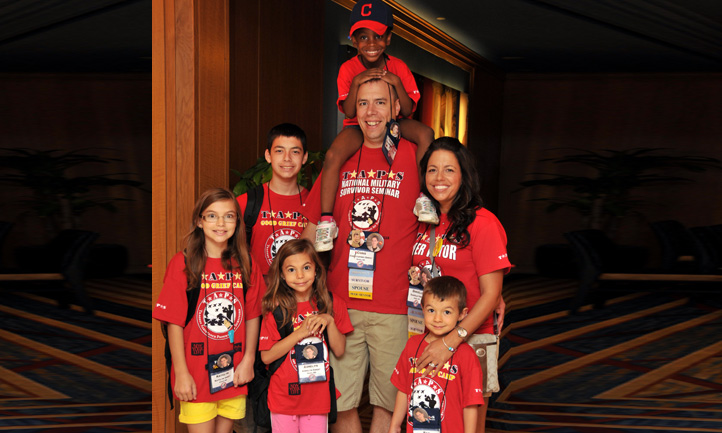 “How am I supposed to kiss you goodbye tomorrow at the airport knowing it might be the last time I see you?”

As Ryan stood there that night with his arms wrapped around my waist, looking reassuringly into my eyes, he promised to come home, told me not to worry, and said he was going to continue to be a “pain in the ass until we are in our eighties.” Nearly six months later, one week before he was scheduled to come home, I received the news we all fear when our loved ones go off to war. “On behalf of a grateful nation, we regret to inform you of the untimely death of…”

Ryan had been instantly killed by an Improvised Explosive Device (IED). He was at the very end of his first and only deployment, serving as a Federal Agent for the Air Force Office of Special Investigations. We had always said if you could look up the definition of the perfect marriage in the dictionary, you would find a picture of us. Ryan and I had 11 amazing years together; we were soul mates and best friends in every sense of the word. I once had someone tell me that we must have been husband and wife in another lifetime because it came so easily to us.

At some point after Ryan died, friends and family began to comment on the idea of me dating and finding love again. I would tell them, “I was so lucky the first time, there is no way I could ever be that lucky again.” I was satisfied and content with that logic and went about my life as Ryan’s widow and the mother of our children. I was proud to be Ryan’s widow; it is a title I did not ask for and never wanted, but one that I completely embrace.

It means that I will forever love a man that loved his country so much that he was willing to die for it. Understanding the violent nature of his job led Ryan to write me a goodbye letter just in case he didn’t make it home. There were two things in it that stood out: to live my life, because in his words, “I died; you didn’t” and to find someone that would love me and be there for me. I can’t imagine the thoughts and feelings he struggled with to be so insightful and understanding, but that was just the kind of person he was.

Those words continue to echo in my mind and are permanently etched into my brain. It was in the early morning hours of February 12, 2009 that my wife succumbed to the rigorous chemo treatment for her cancer at Walter Reed Army Medical Center.

Jessica and I had fallen in love 12 years earlier while we were both assigned to our first duty station at Charleston Air Force Base, South Carolina. Once we got together, we knew instantly that we would be together forever. She was my soul mate and I was hers. Now I found myself alone and struggling to find the words to tell our three kids that Mommy was in Heaven and not coming home.

Fast forward four years. I met Chris while attending Snowball Express in 2009. I walked up and introduced myself after noticing he was wearing an Air Force sweatshirt. I wondered if he and Ryan had ever been stationed at the same place, at the same time. We determined that wasn’t the case, and went on to talk about Ryan’s and Jessica’s deaths. My heart ached for Chris as he explained to me his one year mark was a couple of months away. I vividly remembered how difficult that one year mark could be, so I offered what little advice I could and we said goodbye. We didn’t see each other again until the TAPS National Seminar in 2010. We talked for a few minutes and didn’t see each other again until Snowball Express 2010. Quickly and without doubt, love was in the air, and we didn’t waste a single moment to pledge our forever love.

To say that luck has struck twice would be an understatement. Not only have I been fortunate to have the love of two great and amazing men, I have also found my “other” soul mate and best friend. Just as quickly as Ryan and I realized that we were meant to be together, Chris and I also realized that we were meant to be together. We had been placed together, not by chance, but by fate. I like to think of Ryan’s love for me as being so strong, that by him putting Chris into my life, it is a way of him continuing to love me and ensuring my happiness. Chris’s description of the love he and Jessica shared, and the marriage they had, is almost a mirror reflection of what Ryan and I had shared. The marriage that Chris and I have sometimes feels like a continuation of those marriages.

On the 4th of July in 2011, under the arches of the Air Force Memorial in Arlington, Virginia, I did something that just a few years earlier was completely inconceivable. For the second time in my life, I married my soul mate. The guests consisted of a handful of casual passers-by, our five children, and two very special heavenly guests represented by tiny photo charms attached to Danielle's bouquet. Just as I believe that Jessica and I were meant to share our lives together, and Ryan and Danielle were meant to share their lives together, I believe that ultimately Danielle and I were meant to share the rest of our lives together. I know how much Danielle still loves, misses, and grieves the loss of Ryan, and she knows how much I still love, miss, and grieve the loss of Jessica.

Danielle and I like to believe that we were a match made in Heaven, literally. Who we are today, our love, our beautiful family; we owe it all to Jessica and Ryan. Many of our friends and family cite what is perceived as obvious for how and why Danielle and I came together. They assume that it is our shared connection of tragedy, death, and grief. But the greater commonality is that we both loved and were loved so perfectly and that we have found far more similarities with how we lived and loved with Jessica and Ryan than how we coped with the grief and tragedy of their deaths.

We are amazingly fortunate that we can allow ourselves and each other to continue to love and honor our late spouses and that we can share that with our combined five children. In our home we will always honor and remember Jessica and Ryan (or Mommy and Daddy as the kids like to say) in Heaven.