In 2010, Telos Corporation had been a financial sponsor of TAPS for several years, but wanted to step up its involvement with this great organization. The company decided to do this by accepting the Corporate Challenge with TAPS Run and Remember Team. Telos employees would train for and run the Marine Corps Marathon (MCM) in memory of a fallen service member and each Telos runner would be connected to the family members of an honored service member early in the year as the Telos runner began his or her training regimen. Over the course of the months of training, through the connection with the family, the Telos runners would learn about the hero in whose honor they would be running. Then on race day, the runner would wear a special TAPS singlet along with an 8”x10” picture of the fallen hero pinned to the back of the singlet. 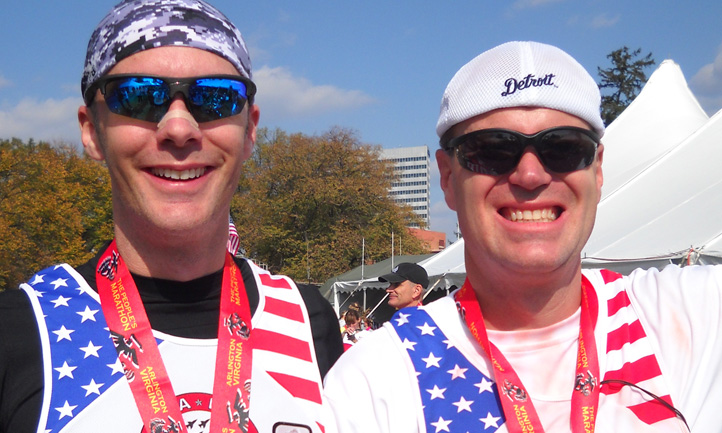 I volunteered for the team with some reluctance, because I was initially focused on the race itself. I had not run a marathon for five years and knew the training commitment that would be required to meet my goal. But the thought of running as a part of this program and giving back in such a very small way to the families who had sacrificed so greatly was all the motivation I needed to make me get out there and train for 26.2 miles of running once again.

TAPS connected me with Mrs. Mary Manoukian Calhoun whose only child, Marine Corporal Nick Manoukian, was killed in combat operations in the Al Anbar province of Iraq on October 21, 2006. Mrs. Calhoun is a wonderful woman, kind and humble. Nick was her only child and was her world. Understandably, this loss was still devastating to her and would be throughout her life, but she had found the sustaining power to continue on after her loss through reliance on her faith. Over the course of several months, we exchanged emails and spoke on the phone. I was able to see the man that Nick was and her great love for him. We discussed her faith and how it helped through this ordeal. She sent me a special patch with Nick’s name and picture which I sewed on to my TAPS singlet in addition to the 8”x10” picture attached to my back.

Mary told me about meeting a woman named Trish Collinsworth when she was waiting at the airport for Nick’s body to be returned home for burial. Tragically, Mrs. Collinsworth was there for the same purpose. Her son Cliff was also a Marine from Michigan and had been killed in the same attack that took Nick’s life. Mary and Trish had become friends and lived close enough to each other to be able meet from time to time for lunch or coffee. Their circumstances had clearly bonded them in a special way. She said that someone from the TAPS Run and Remember Team was going to be running to honor Cliff Collinsworth’s memory at the Marine Corps Marathon.

A few days before the race, in our last conversation before the event, Mary mentioned that she had just seen Trish and that the Collinsworth family would be coming to DC for the race. Mary, however, would not be able to make the trip. The idea of me meeting with the Collinsworth family seemed to lift her spirits and enhance her connection to the race, but she hadn’t actually arranged such a meeting for us. I recall her saying, “I am just praying that somehow you will be able to meet up with Trish.” I told her I would love to meet with them, but we didn’t go much farther than that.

As race day dawned, I was energized. In the races I had run over the years, I had seen thousands of people running in honor of others, but had never done this myself. I had seen people with customized shirts, or writing scrawled on their clothes, or wearing sandwich boards or photos, but I had always been anonymous. Now I was asking people to take notice of this man whose name and image I wore. I wondered what sorts of reactions or encounters this memorial would invite. Needless to say, with a race of more than 30,000 runners and twice that many spectators, there were too many shouts of encouragement and recognition to track. There was always, though, a shout of recognition and support (often a “hoo-ah”) from those wearing the TAPS singlets.

I had been disciplined in my training, but as so often happens when running a marathon, I started to suffer after mile 20. My legs were sore and heavy. I was fatigued. There were many points where I felt as if every fiber in me was screaming for me to just stop. When I would push through those points, it wouldn’t be long before I was right back to the same feeling. And with each passing step, the intervals between feeling okay and feeling distressed would get shorter and shorter. You are engaged in a physical endeavor, but it is your mental and spiritual stamina that is being tested. I often pray or recite scripture verses at times like these for inspiration.

Finally, after turning by the Pentagon, I reached the last mile—a long straightaway filled with thousands of runners struggling to reach that finish line, the same as me. I was hurting. I was frustrated because I was so close to the finish and yet I felt like I might not be able to continue, that I might have to stop or be sick or just crawl the last half mile.

And that’s when I saw it.

About 50 yards ahead of me, I noticed a guy wearing a TAPS singlet, but he didn’t have a pictured pinned to the back of it. Instead he had writing on the shirt that read “CLIFF” in big letters, with something else written below it that was too small to see. Could it be? I had to know. I was hurting, but I sprinted with everything I had in me to try to catch up. And as I got closer, I saw the letters below that read “Collinsworth.” Tears formed in my eyes, and I pushed forward again.

I couldn’t believe what I was seeing. Out of the sea of humanity running this race and out of the most improbable wish of a grieving mother, with no human planning to make it happen, I was now running the final quarter mile of the race next to a runner wearing a shirt with Cliff Collinsworth’s name on it. I could barely speak, but when I talked to him, I learned that he was a close friend of the family and that the whole Collinsworth family, including Trish, had come out to run the race. I told him about Mary’s prayer, and we shook hands and then pulled each other the last stretch of the race across the finish line.

When I told Mary about the encounter with the Collinsworth family, she was happy but also calm as she clearly knew that God answers our prayers.

I cannot know Mary’s feelings over her loss. I can’t begin to express the proper amount of gratitude to her for her family’s sacrifice on our nation’s behalf. My prayer, though, was that this experience could be another step in helping her live with the tragedy of losing Nick and that the work TAPS does to help survivors of fallen heroes would continue.

By David Easley, Team Telos Runner: David Easley, CPA, is the Controller and Vice President of Finance and Accounting for Telos Corporation. Telos is a leading provider of advanced technology solutions for customers including all branches of our armed forces, intelligence, and civilian agencies of the federal government.