My only child, Corporal Benjamin Kopp, an Army Ranger, died on July 18, 2009 of wounds he suffered during his third deployment in 2009. In his final wishes, he requested that he be laid to rest at Arlington National Cemetery. This made perfect sense to me, and although I live in Minnesota, I didn’t hesitate to honor his wish. 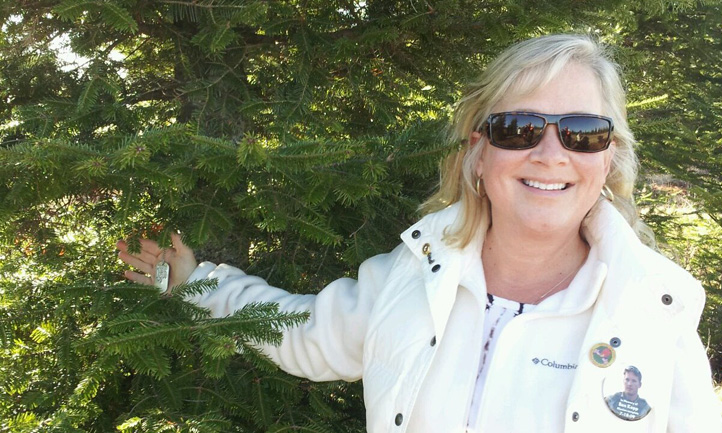 Several months later, people began asking me if I was coming back to Arlington for Wreaths Across America (WAA). I had no idea what that was. Once I learned what the organization and the event were all about I quickly made arrangements to be there that first year. I hadn’t been to Ben’s resting place since his funeral in early August. Coming back in December would be my first time seeing his headstone and it brought comfort to know I wouldn’t be there alone.

Wreaths Across America is an organization that began with a memorable trip to Washington DC by then twelve-year-old Morrill Worcester. Many years later, as the successful owner of Worcester Wreaths in Harrington, Maine, Morrill found himself in 1992 with an excess of 5,000 wreaths for the holiday season. His thoughts went back to his boyhood trip as he pondered the idea that he owed his prosperity, in part, to the values of our country and the veterans who had laid their lives down to defend and protect them. He delivered the extra wreaths to a section of Arlington that had experienced declining visitors over the years.

This routine continued, virtually unnoticed, until 2005 when a photo of the rich green wreaths tied with red bows and lying against the headstones in the snow, went viral across the internet. Now, each year the second Saturday in December is recognized as Wreaths Across America day not just at Arlington, but at national and state cemeteries across the U.S.

When the 2009 wreath day arrived, I was touched by the number of people who had come to Arlington to honor and share such goodwill to all who are laid to rest in those hallowed grounds. From that day forward, I committed to being at Arlington for Wreaths Across America every year.

The next year a friend shared with me that Gold Star family members could travel from Maine to Washington, DC with the wreaths. What began as a quiet trek from Worcester Wreath Company in Maine to deliver wreaths to Arlington has become a week-long journey of remembering, honoring, and teaching communities along the way. My friend had done this herself and highly recommended the trip, assuring me it would be the trip of a lifetime. I was convinced and began making plans for 2011.

I arrived in Maine two days before the official convoy began. Three other surviving moms arrived the same day and we were escorted to the wreath headquarters. There we met Morrill and Karen Worcester.
Our driver was Lieutenant Colonel Wayne Merritt who served in the US Air Force during the Vietnam War and is Co-Director and Board Member of Wreaths Across America. I was highly impressed with the credentials these folks had, but above all, they were incredibly kind and made us feel special in their presence.

Wayne picked us up from our hotel the next morning and we headed out to the tip farm. “Tipping” the branches is the procedure used to obtain the material to make the wreaths. Morrill and Karen had made two dog tags with my son’s name on them. One was for me to keep and the other was to attach to a tree of my choice. I was also given a patriotic ribbon to mark the tree as my very own in honor of Benjamin. Each tree is capable of producing wreaths for thirty years, meaning my son would be credited for continuing to give to his fallen comrades from his designated tree.

Before we left Maine, a handful of other Gold Star family members arrived. There was a father, a grandfather and several surviving wives who were set to ride along. Some of us would be riding in a bus and some of us would take turns riding in semitrailers whose drivers had volunteered their time to deliver the wreaths. In addition to the Gold Star bus, there were state troopers, Patriot Guard Riders, and the numerous semis containing the wreaths.

We were a convoy! A real life convoy, like you see in the movies. There were eight semis being led by one of the Maine State Troopers, followed by an assortment of pickup trucks, cars, motorcycles, police cars, fire trucks, our Gold Star bus, and whoever else managed to slip in along the way. At any one time there were twenty or more vehicles. Seeing us all together on the highways and byways was pretty sensational.

The route was planned in advance and some of the stopping places were repeats from years past. Witnessing the honor and patriotism we were greeted with, I understood why. Our first stop was a sunrise ceremony at Quoddy Head State Park in Lubec, Maine, the eastern-most point in the continental United States. From there we went into Canada to exchange wreaths with a ninety-one-year-old gentleman who had served with the US and Canadian Special Forces.

In total the trek took us through eight states and allowed us to participate in two or more ceremonies every day. We visited elementary, middle and high schools, military and Christian academies, an Elks Lodge, fairgrounds, war memorials, and cemeteries. Although no two ceremonies were exactly the same, there were similarities. There were sidewalks lined with flag waving children and adults. There were enormous flags draped between the extended ladders of fire trucks. There were patriotic songs, cheering, and high fives, moments of silence, a sea of happy faces, and plenty of tears. They were not always tears of sadness, but tears of comfort and joy in feeling the love, support, and loyal patriotism from our fellow Americans.

When this wonderful journey concluded at Arlington, I reflected on the words of my friend telling me this would be the trip of a lifetime. She was right. I had spent the last seven days making friends, being embraced by strangers, and participating in events that made America shine bright as the sun.

Morrill and Karen Worcester are two of the kindest and most humble people I have met. Morrill will tell you he is just a wreath maker from Maine. I beg to differ. When you generously and willingly give back to the world, that makes you an angel in my book. I will never forget the angels I encountered during my Wreaths Across America trek all because a twelve-year-old boy never forgot what mattered to his heart.

By Jill Stephenson, surviving mother of Corporal Benjamin Kopp: Jill Stephenson lives in Minnesota and travels the country as an inspirational speaker and advocate for organ donation and veterans’ issues. For more information about Wreaths Across America and this year’s trip from Maine to Arlington, please visit www.wreathsacrossamerica.org. The date for the event at Arlington this year is December 15th.