On April 6, 2005 a U.S. Army helicopter crashed near Ghazni, Afghanistan killing all five crew members along with 11 passengers. The call-sign of the CH-47 Chinook helicopter was Windy25, one of the aircraft belonging to F Company, 159th Aviation Regiment, “Big Windy.” 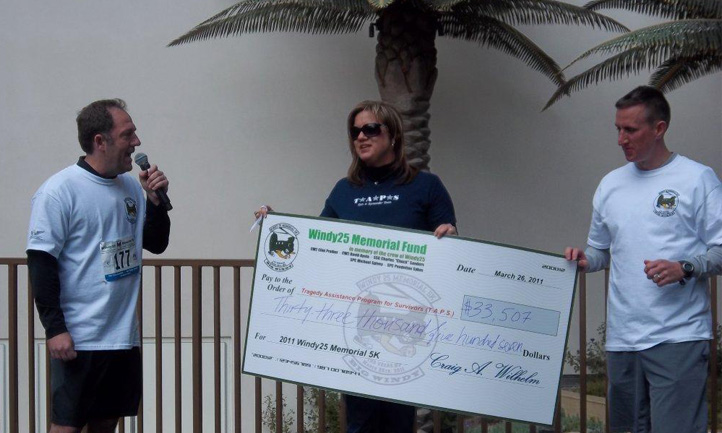 Each year since the crash, members of the unit have gathered to honor their battle buddies and memorialize the loss. In the first years, the unofficial get-together happened in various places, and included any non-deployed Big Windy alumni who could attend. In 2009, the anniversary was marked by a reunion trip to Germany where a memorial park was dedicated.

In the meantime, some of the surviving family members had begun to attend TAPS events. The commander of the unit at the time of the crash, Major Craig Wilhelm, attended the TAPS National Military Survivor Seminar in 2007 in support of surviving family members. “It was an incredible, positive forum for children and spouses to meet others,” he said of the event.

Several years later and after the unit had dedicated the monument in Germany, the idea of creating a memorial fundraiser was born at an informal gathering of the battle buddies. The Big Windy alumni formed a 501(c)3 charity, the Windy25 Memorial Fund, and planned an annual fundraising 5K race to honor their fallen. Las Vegas, Nevada was selected as the venue due to its significant military presence, its reputation as a fun and energetic destination city, and its easy access from most cities across the United States.

The first Windy25 Memorial 5K was held in March 2011 and raised funds to help TAPS. According to Wilhelm, “TAPS was a great support to the families of Windy25,” so a partnership with TAPS was a natural fit. More than $36,000 was raised by the 300 participants. The second year saw an increase to 500 runners and now, the Windy25 Memorial Fund has become a three-star TAPS partner, having raised more than $82,000 to date.

“While the loss of members of our Armed Forces often no longer grabs the front pages of our newspapers, we should not forget that many have paid the ultimate sacrifice in service to our country, including the families they leave behind,” said Wilhelm, founder and Board President of the Windy25 Memorial Fund.

“For the families of our fallen heroes, dealing with their grief is hard to imagine. That’s why we are so grateful to support TAPS.”

Next year on April 6, 2013 members of the unit, surviving families, friends, supporters, and anyone else who wants to run will participate in the 3rd Annual Windy25 Memorial 5K in Las Vegas. The race will mark the 8th anniversary of the deaths of Army Chief Warrant Officer 2 Clint Prather, Chief Warrant Officer 2 David Ayala, Staff Sergeant Charles “Chuck” Sanders, Specialist Michael Spivey, Specialist Pendelton Sykes II, and their 11 passengers.

For the third year in a row the Cosmopolitan hotel will host and sponsor the event. One of the newest hotels on the strip, the Cosmopolitan works with Windy25 Memorial 5K to recognize military sacrifice. The race will begin and end at the Cosmopolitan on the famed Las Vegas strip.

“We invite anyone to participate in this epic event by running, walking, or donating,” said Wilhelm.

“The commitment and excitement from the team organizing the Windy25 Memorial 5K is phenomenal and inspiring,” said Marie Campbell, director of the TAPS Run and Remember Team. “We are deeply grateful for their support.”