The Gift at the Water's Edge

Three days after our son First Lieutenant Todd Weaver was killed, I walked the beach near our home, not knowing whether I had the physical strength to keep my legs moving or whether I would collapse onto the sand. I walked, searching for peace in my heart and some degree of comfort or understanding. 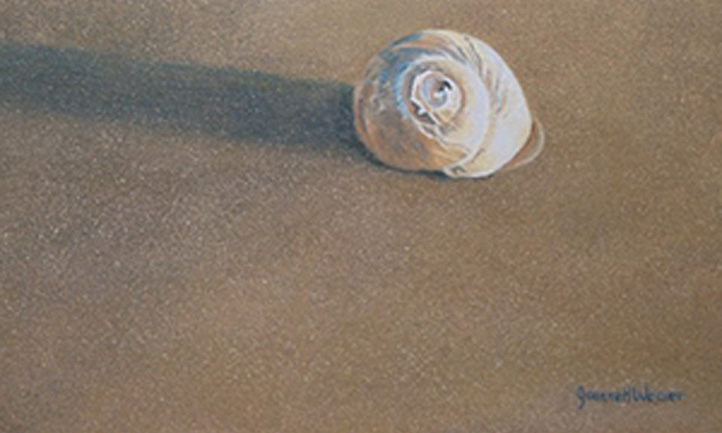 I thought, “Who can I turn to? Where do I turn?” That day, I reached the jetty at the far end of the beach, a mile from our home and turned around. My swollen, red-rimmed eyes caught sight of a little shell glistening on the wet sun swept sand, and I picked it up. It was rare to the beach, not the typical cockle or clam shell. I held it in my hand as I walked.

My thoughts turned to Todd’s life—full, yet cut short. He touched so many people with his zest for life; their lives better just by knowing him. He lived with conviction and dignity. He knew friendship and he knew love of family, wife, and child. He knew disappointment, sadness, sorrow. He knew faith and love for God, understanding that our life here on earth leads to eternal life. His life was complete. He has eternal light.

I carried the shell home and researched its symbolism—a moon shell, simple, smooth, old, with a small hole at its apex showing its inner core. It symbolized life eternal. Later, I recorded my thoughts of that walk in the journal I began to keep.

Two days earlier, our family had witnessed the dignified transfer of Todd returning to American soil. It was a rainy, dreary morning as our family caravanned to Dover. Todd’s flag draped coffin was carried out of the transport area and I watched a general kneel to say a prayer at the coffin. At that moment, the sun broke through the dark, grey clouds and I felt the comfort of a warm, brilliant light and a first sense of peace.

I recorded my experiences of that day in my journal. My writings included laments, letters to Todd, recordings of the day’s events, inspirational statements by friends and family, quotes, anger, sorrow, and memories. I continue writing in it today, two years later.

As an artist of oil paintings, I work alone in my studio at home, but I had closed the studio when Todd was killed. Dried oil paint brushes sat upon their pallets. Unfinished canvases rested upon easels. I could not bear to even consider painting. My emotional state would not allow me to think about the typical seascapes I normally created. The studio remained dark. But subconsciously, I was building a portfolio in my journal and in my mind.

Four months after Todd was killed, I began to paint again. The first paintings were of his shoes—his little red baby shoes made of soft leather bought in Budapest, Hungary where we lived on a Foreign Service assignment with the U. S. State Department; his baseball cleats, all muddy with tattered shoe laces from the last game of baseball he would ever play; and a pair of Army boots returned from Afghanistan to his wife Emma. They completed a trilogy of Todd’s life through his shoes.

As I painted, I listened to the music Todd’s brother, Glenn, had recorded for the memorial service: inspirational music and patriotic country music which I remembered listening to with Todd and his family just before his deployment to Afghanistan. Over and over the music played. While it played I painted, tears streaming down my face.

Why would I force myself to such levels of emotional turmoil? I had to reach the depths of that turmoil in order to dig myself out. I painted more than 40 hours a week, taking time away from the studio only for the family or for events related to nurturing Todd’s memory. I would not allow anyone to view the paintings…They remained protected in my studio.

With artistic discipline and creative energy, I worked to develop strong compositions which captured my emotions and the light. The light shown in Todd’s life, the light cast upon the little shell I had found on the beach, the brilliant warm light I had experienced at Dover the day after Todd was killed. I did not know what the end would bring. I only knew that each painting seemed to bring another, each one symbolizing words spoken, memories cherished.

With each painting completed, I captured Todd’s life and his death. I began to feel strength and resolve. It took me close to a year to build up the courage to paint the female notifying officer at my door that morning of September 9, 2010. Memories had raced through my mind that morning as I stood frozen in my tracks, alone in the house, unable to move forward to the door. The painting needed to encompass all of those raw emotions.

Exactly one year after Todd was killed, fourteen paintings entitled “Losing Todd, A Mother’s Journey” went on exhibition through the Muscarelle Museum of Art at the College of William and Mary in Williamsburg, Virginia. The series was not yet complete, but it was important to me to share what I had created at the college which had rallied together in support of the loss of a great student, citizen, soldier, loving husband, father, son, brother, and uncle.

I continued to paint full time until I reached painting # 21, the moon shell symbolizing eternal life which I had found three days after Todd’s death. It was my first gift and it came from the sea. This was important to me, spiritually, as it was found at the edge of the cleansing water and has led me on an awesome journey which brought, and continues to bring me, grace and peace. Each of us finds their own will to go on. This was mine and I cannot imagine where I would be today if I had looked past that little shell. When I finished its painting, the series was complete.

Losing a loved one is always hard. The journey through grief is personal. It is lonely. I chose to contend with my grief through my painting. It allowed me the emotional stream to endure reality. Throughout the journey, I have learned that I can share it with others.

Todd died defending his soldiers, his family, and his country. I honor and share his sacrifice and the sacrifice of those families whose loved ones have made the ultimate sacrifice. I hope my series of paintings is of some help to those who have witnessed similar grief. I hope the paintings also offer witness to our country of all those brave men and women who have given their lives in defense of our freedoms.

The 21 paintings hang in our home in memory and tribute to Todd and will continue to be a part of our family’s heritage. I am always willing to share the series so that others may begin to understand the national treasure our country has lost in the lives of our loved ones.

Some of Jeanne's paintings (below) on display at the 23th National Military Survivor Seminar and Good Grief Camp. 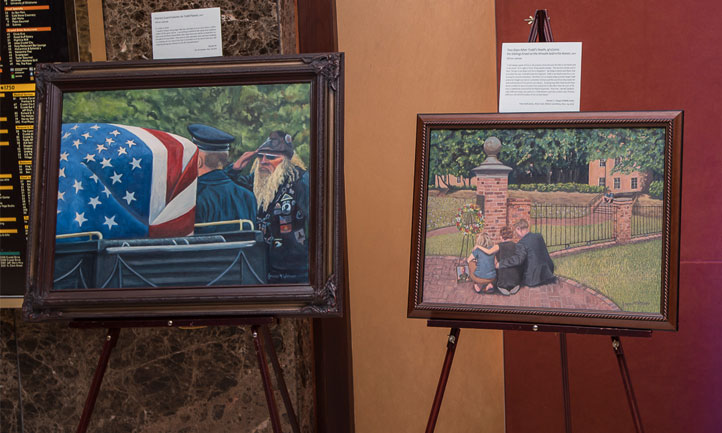 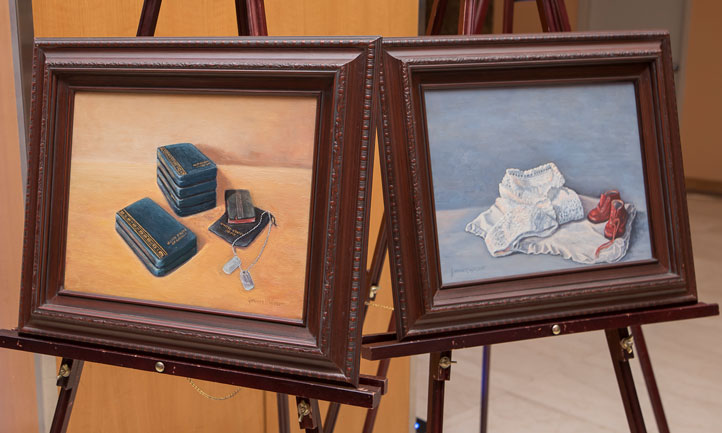 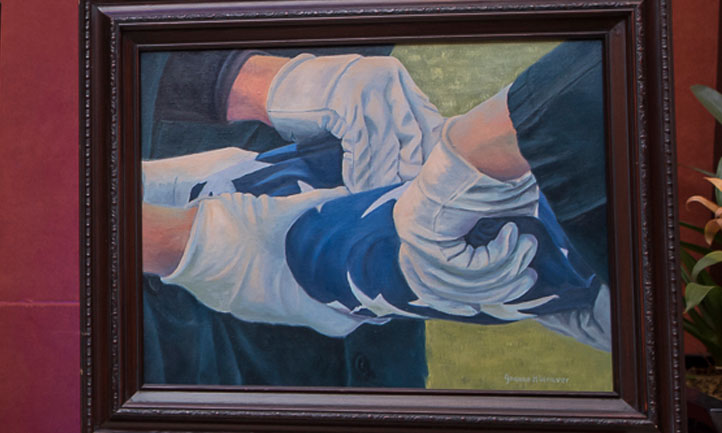 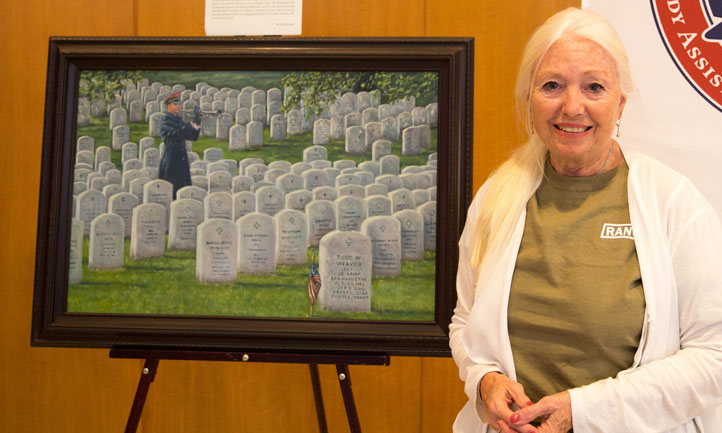 To experience all of Jeanne’s paintings, visit www.jeanneweaverartist.com.