I first met Mike in the winter of 2005-2006. I had moved to Girdwood, Alaska, about an hour south of Fort Richardson and worked at Alyeska Resort—the only ski resort in the state. My rules were that I didn’t date Army guys, but Mike’s sister assured me he was a great person. He was sitting at a table with others and I liked his southern accent. We soon discovered that we had both lived in the same town in Georgia. He asked me out and for our first date, he showed up wearing shorts (in Alaska, in the winter!). He was protecting his new tattoo from rubbing on his clothing. After three weeks he told me he loved me. 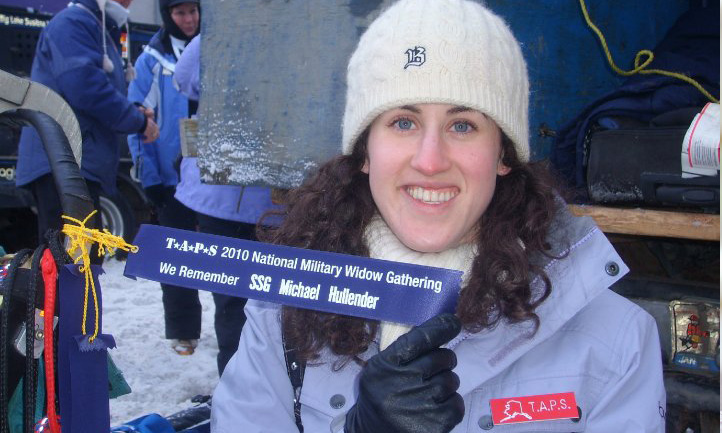 We were together for the next seven months before he deployed to Iraq. In February, he came home for R&R and asked me to marry him. I was thrilled to be engaged to Army Staff Sergeant Michael Hullender. Two months later he was killed.

Our last memories together were made in the winter among the mountains of Alaska. Mike loved it there. In December, he had written, “I'm thinking about you...and the mountain. It is such a magical place for me, and I attribute the mountain to changing my life forever. If it weren't for that place I would not have met you and experienced so much of what I hold important to my life. There is such a calming effect that takes over me when I am with you. The good is better and the bad is washed away…”

When we planned our first TAPS retreat for widows, widowers, fiancées, and girlfriends, I chose the town where Mike and I had met—overshadowed by the mountain he loved. I wanted to share the place that I loved most in the world with my new TAPS family. I wanted others to see Alaska the way I saw it and enjoy the spectacular scenery and the beauty of nature there.

The community was so supportive to me in the days after Mike was killed, and I was comfortable asking them to help others who had lost a loved one in military service. Many of those early supporters added their expertise and volunteered to help with the retreat. The small town that helped me has become a mainstay for TAPS retreats. The first two retreats were there, and we are planning two more next year.

Since our first event in Alaska, TAPS has expanded the retreat program. Erin Jacobson and Ashley Martin assist in coordinating and planning retreats across the country, and I am grateful to have them, since TAPS is scheduling ten retreats next year.

As winter approaches and the days grow shorter, I think of the time I spent with Mike in Alaska. When I lived there, the sun spent most of the winter just barely showing above the horizon. A sunny day was a special gift to us, because it happened only rarely. With each sunny day came unexpected joy; we laughed and it felt like we hadn’t laughed in years.

Our grief can be like that, too…we are never sure when or if we will see the sunlight again. My hope for you is that TAPS Retreats will add a sunny day to your grief journey and bring you unexpected joy in the midst of sorrow.

By Kyle Harper, MA, Director of Special Events and Communications