It couldn’t have happened…but it did. It shouldn’t have happened…but it did. There it was, that wooden box that was holding my precious son, my only son, draped in the colors of the country he fought and died for. It’s still hard to say…but, there it was. There I was, standing beside that box, my hand gently lying upon that revered cloth and again the tears flowed freely, and I would not stop them from flowing. They were coming from the break in my heart. They still come, you know; every once in a while they flow, and again I will not stop them. 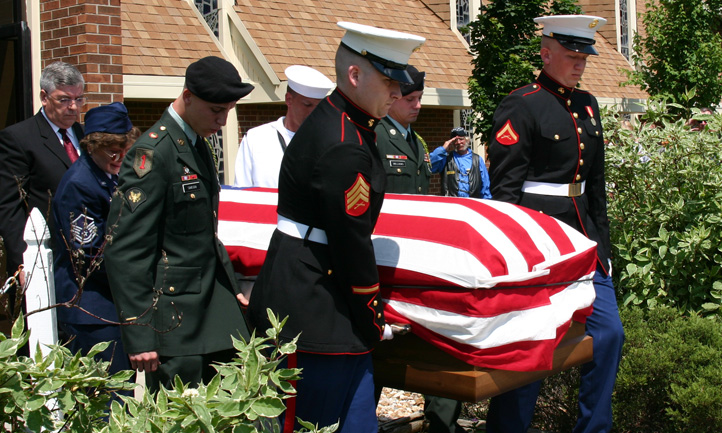 I can’t really recall the weather outside. All I know was that it was hard to see through the pain. It was like trying to look through glass, stained with smoke. But again, I remember the flags…those beautiful, glorious, waving, grand flags. The Patriot Guard brought them in honor of my son. They were there to accompany my son to his final post, there to accompany him to rest with heroes of the past…fellow American heroes.

I found myself wishing the drive to Fort Leavenworth would go on and on, because at least I was with him. All along the highway people would stand on the overpasses with hats off, hands over their heart or above the eyebrow showing their respect to another fallen warrior. And I found myself pleading within my heart, “Oh don’t forget, please don’t forget, the price that was paid. Not just by my fallen warrior, but by all those who fell…for us. Oh, please…”

I looked out the window of the black coach they call the “family car” and before I wanted it to be over, it was over. We had arrived at my son’s final post, his permanent post. His new “peeps,” he would have called them, lined the streets leading to the national cemetery on post. They were saluting, standing proud as though to welcome a fellow soldier. And yes, there were faces of pride and respect…and tears. There were children of the soldiers posted there with small flags in their hands and I knew that living on an Army post, they understood. 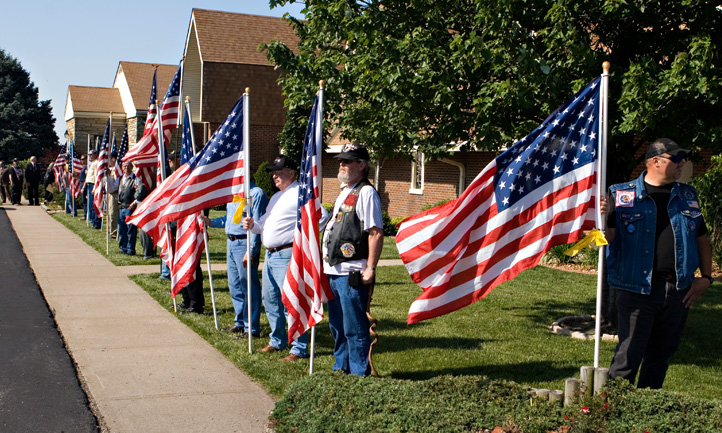 We came to a stop sign. The last stop sign before we would leave him to rest. I looked out the window and I saw them. There they were standing…row upon row, line upon line, straight and upright…standing tall, standing proud, standing at attention, those white stones of honor.

As we drove by them, my eyes were fixed upon those white stones. And I came to realize that each stone represented someone—a true person—a true human stating with confidence and without reservation, “My life for the cause of freedom.” and I was humbled. Humbled, because now my son would join the ranks of those patriots.

Each white stone announced the name of the one who rested there. From wars of the distant past and the not so distant past to the present. And there are stones that mark the graves with no names. They too gave their lives for the cause of freedom. They all should be remembered, never to be forgotten. And now my son would join their ranks. There is a white stone waiting for him. To mark his act of courage, his act of valor, his act of sacrifice.

As the black coach came to a stop, I stepped out of the car as they were bringing that box to the pedestal to rest. There it was, sitting so still. Old Glory was again draped over it like a warm mantle as if protecting it from the elements. The family sat along the side of the pedestal. I looked again at that respected piece of cloth and it seemed as though it was saying to me, “Your precious son is now my precious son, and I will cover and protect him for right now his blood is mingled with the blood of his fellow brothers and it will run, as long as I fly, through the red stripes I wear.”

Oh, the joy…oh, the sorrow.

I was brought back to the present by a command echoing in the air, and I knew what was coming next. “Ready, aim, fire,” and seven rifles fired a volley into the air; three times they fired. And I wept. The crack in my heart became a crevice. And then in the distance I heard the faint sound of bagpipes playing “Amazing Grace.” And like before, it was over before I wanted it to be over.

Because now I had to leave him, and I would never see him until we met again in Heaven. The people who followed us there were now silently getting into their cars and leaving. I turned around and took one last look at those white stones of honor, and they spoke… “Do not fear, for your son is now safe with us. He is now a brother of the white stones, and we take care of our own. You are welcome to return whenever you wish to visit him. We only ask one thing: when you come, remember us, too. Speak our names out loud, and we will know that we are remembered and that the price we paid is not in vain. Thank you. Thank you for being strong enough to give your son to the cause and for leaving him here with us. Remember, speak our names.”

I turned as I was stepping into the black coach and I said with all the hope and pride I could muster at the moment, “I will remember. I will speak your names every time I return. I will.”

As I looked across the field of white stones, standing so proudly against the evils and terrors of this world, my heart felt hope—hope because there are still men and women of this great country who are not afraid of these white stones.